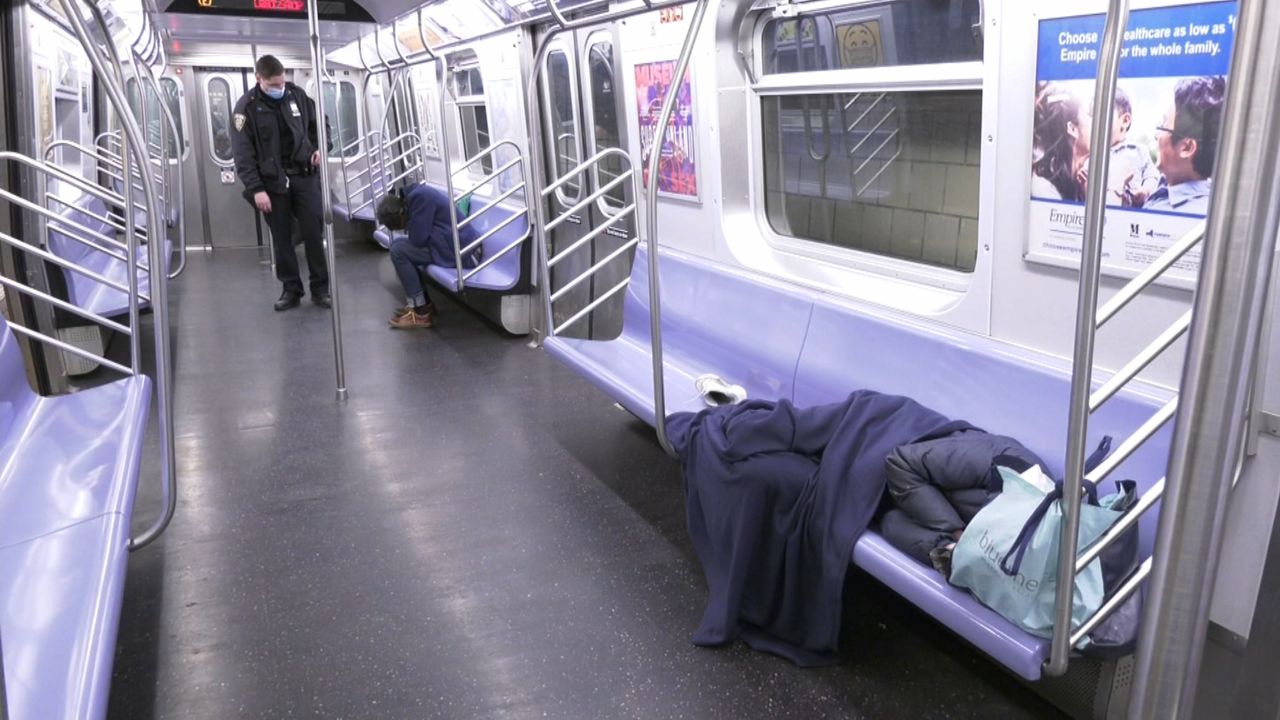 Last month, Mayor Eric Adams announced a new plan to crack down on homeless people on the subway. He said police would begin enforcing the MTA’s code of conduct, and teams of workers would try to convince people to go to shelter instead. A month later, NY1 reporter Courtney Gross went out in the middle of the night to ride the rails and see how the mayor’s efforts are going. (Spectrum News NY1)

Overnight on the trains: The subway safety plan a month in

At around 1 a.m. Tuesday, a group of NYPD officers was taking on some new tasks.

An officer taps on the metal poll inside a subway car.

“Can you have a seat please? You need shelter services?" he asks a man lying down. The person slowly sits up.

Car by car, at the end of the line in Coney Island, NYPD officers were waking up people sleeping on the train and offering them a place to go.

"People are going to come with an orange uniform. They are going to help you out," says one officer to Alexander Makogon.

Makogon takes a seat on a nearby bench. He explains he will wait to be taken to a homeless shelter.

"Do you normally sleep on the train?” we ask.

This is all part of a new effort by the Adams administration to force people experiencing homelessness off the subways.

It's been a month since the mayor enacted his so-called “Subway Safety Plan” — which charges police officers with enforcing the MTA’s code of conduct. That means no sleeping and lying down on the trains, no drinking alcohol and no smoking. It’s directly aimed at people who are using the trains as a place to sleep.

So we went out in the middle of the night to see how it was being implemented.

The police presence was clear. When we visited stations in the middle of the night in early February, we did not see any officers. This week, police were walking up and down the platform at 1, 2, and 3 in the morning, waking people up.

"Sir, it's the police,” one officer shouts inside an E train to a sleeping person at Jamaica Center. “Good morning, you are at the last stop."

Police were offering people services, a placement in a shelter, for one.

On Tuesday, Richard Elder took the placement, but he said the police presence wasn't helpful.

"Cops don't let you sleep on the train too much,” Elder said. “They say, ‘Don't sleep on the train, get up.’ They offered it, so I took it. It makes me feel really violated that I didn't do what I had to do again. It rehashes a whole lot of problems and mental thoughts and stuff like that."

At the end of the E Line in Jamaica, MTA police shepherded people off the train.

Then many just waited on the platform for the next train.

They boarded and headed in the other direction.

On Tuesday, the Coalition for the Homeless released its annual report, which in part criticized the new approach.

“I would hope that instead of the city going down this path of criminalization and policing, they should instead begin looking at their own data and seeing what has worked to help people come indoors and expanding access to those kinds of options,” said Jacquelyn Simone of the Coalition for the Homeless.