A line of people, mostly Asian American and Pacific Islander women, wait on the sidewalk on a street on the Lower East Side. (NY1/Anna Sterling)

The giveaways over the past two weekends in Manhattan drew hundreds in the Asian community. The “prize”? Pepper spray.

People who waited hours on line say they wanted the device to protect themselves against attacks similar to ones reported in recent months.

Ceci Kim, who lives in Brooklyn, traveled on Sunday with her elderly parents to the Bungee Space, an art space and bookstore on the Lower East Side for the giveaway advertised specifically for Asian women and seniors.

“Just for something to hold on to for security and just to feel a little safer when they're walking about — that's why we're here,” Kim said.

Attacks against Asians have been on the rise during the pandemic, but interest in the event surprised organizers.

“When I posted this [on Instagram], we got crazy feedback, like actually way beyond our expectations,” Shisi Huang, owner of Bungee Space, said. “This is because everybody’s scared.”

A week prior to the event at Bungee Space, Yu and Me Books in Chinatown held a similar event giving away pepper spray to “AAPI women and femmes,” said Lucy Yu, owner of the bookstore, which partnered with Soar Over Hate, a nonprofit advocacy group, to provide the safety devices.

The line for the March 13 event wrapped around the block outside the bookstore with some women waiting hours to get their pepper spray, Yu said. 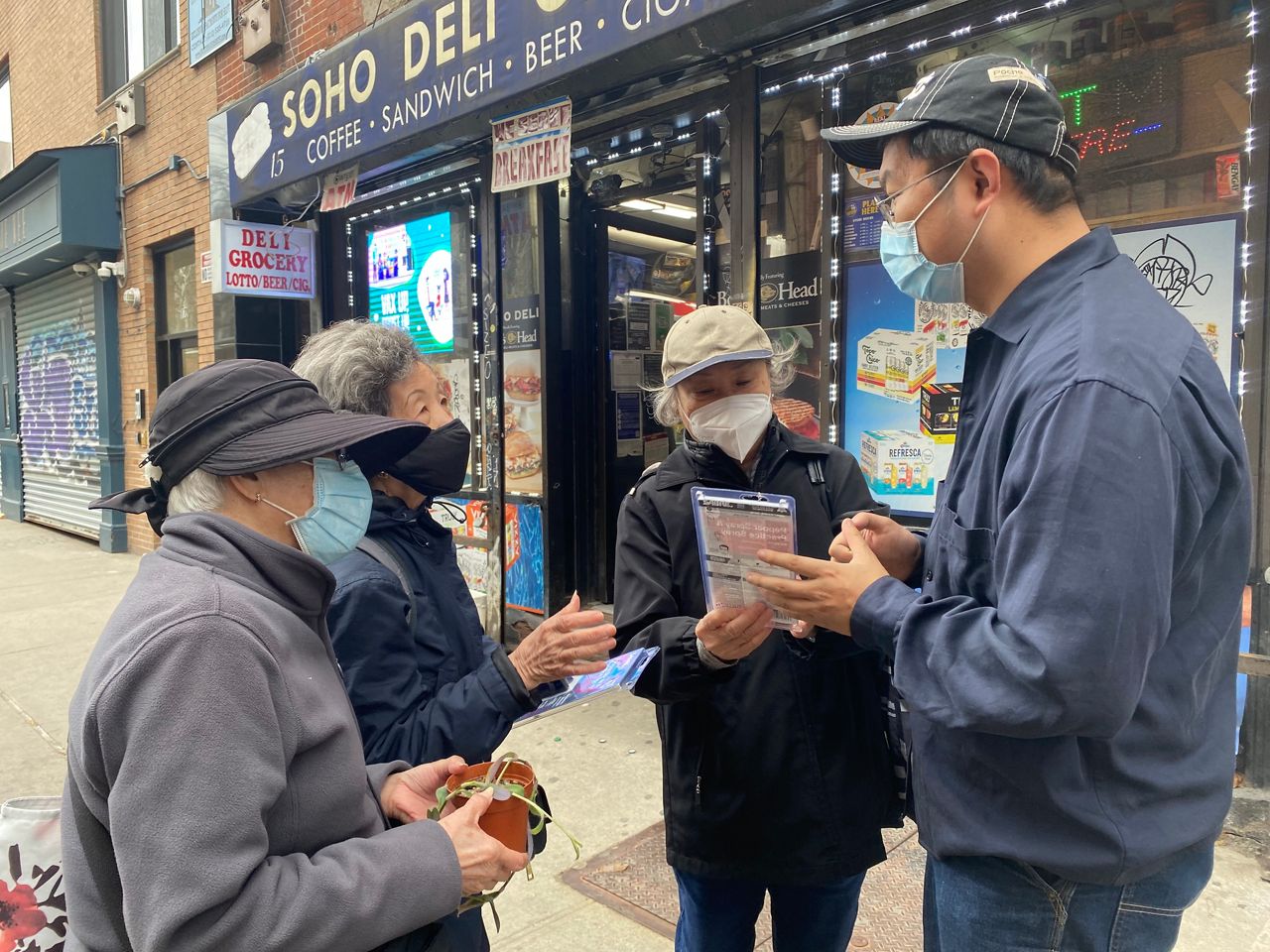 “I didn't expect there to be that big of a line,” Yu said. “It's a really scary time. We're feeling super unsafe and scared and so this is something that was really needed.”

Adults who have not been convicted of a felony or assault can legally carry pocket-sized pepper spray, according to state Department of Health regulations.

Through Feb. 20 this year, there have been seven anti-Asian hate crimes, compared to three in the same time period in 2021, according to police data.

Recent high-profile attacks against Asian women, including the death of Michelle Go, who was pushed onto the subway tracks in January, and the fatal stabbing of Christina Yuna Lee in her Chinatown apartment in February, have alarmed the community.

But it was the March 11 attack on an Asian woman outside in Yonkers in which she was punched 125 times that was the final straw for Taole Zhu, who lives in New Jersey, and on Sunday donated the more than 200 pepper spray devices, which typically retail for around $10 each online.

“It's really just unbearable,” Zhu, who is friends with Huang, the Bungee Space owner, said.

At a press briefing Monday, Mayor Eric Adams said these long lines for pepper spray are “an indictment on our city.”

He said the rise of hate crimes “leads to the erosion that we have witnessed in this city and that is part of the overall approach to making this city not to be a city where people have to stand on line to get mace.”

NYPD officials did not respond to multiple requests for comment.

City leaders and community advocates acknowledge the fear among Asian New Yorkers that is driving them to arm themselves with mace.

"Our AAPI neighbors are suffering from unconscionable acts of violence and discrimination, so their perception of crime and violence is their reality,” Councilmember Kamillah Hanks, chair of the Public Safety Committee, said in a statement. “When people feel unsafe, when people receive report after report of hate crimes affecting their community, they feel that they must do what they can to feel safe and take care of one another."

Jo-Ann Yoo, executive director of Asian American Federation, said, “Our community has the right to feel safe, and they want to figure out a way to protect themselves.”

That bit of security that comes with carrying a protective device is also what motivated Michael Huang to attend the Bungee Space giveaway with his wife, Laura Huang.

They live in New Jersey, but are commuting to the city three times a week, said the couple, who were among those lined around the block on Stanton Street Sunday.

“I was concerned for my wife going for a walk or subway without pepper spray,” Huang said.

“There are more coming,” he said.