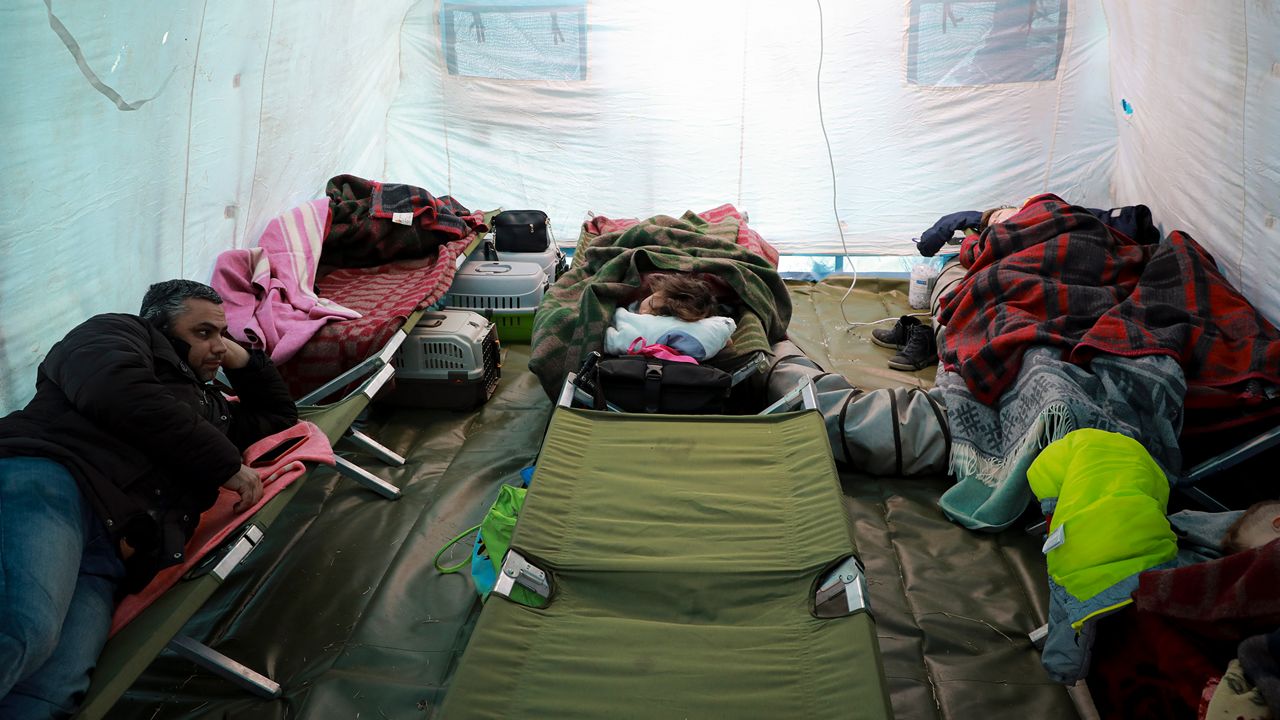 Refugees from Ukraine sleep in a tent part of a humanitarian center at the Moldovan-Ukrainian border, in Palalanca, Moldova, Friday, Feb. 25, 2022. (AP Photo/Aurel Obreja)

WASHINGTON – The tidal wave of refugees trying to escape war-torn Ukraine is overwhelming the State Department’s ability to help them.

More than 2.5 million Ukrainians have fled their country since Russia launched its invasion on Feb. 24, the U.N. reported Friday. Some of them are seeking visas to come to the U.S., only to encounter staggering waits at U.S. embassies and consulates in central and eastern Europe just to apply for them.

As of Friday the wait for an appointment at the U.S. consulate in Krakow, Poland, to apply for a visitor visa was 100 days, according to the State Department.

The U.S. embassies in Bucharest, Romania, and Budapest, Hungary, are so overwhelmed they are not even booking appointments except in emergency cases, defined as travel needs “in support of critical infrastructure in the United States, or a life-or-death health emergency.”

Even before Russia invaded Ukraine, many U.S. consulates and embassies had long wait times for appointments because of the pandemic. The flood of refugees quickly exacerbated the delays.

“I think sort of early in the crisis, there were appointments available relatively soon, but now it’s just been backlogged severely," said David Strashnoy, a Ukrainian-born immigration lawyer and former U.S. consular officer. "It’s the perfect storm because now you have a crisis, a refugee crisis.”

State Department officials told Spectrum News that they are “working to ensure our embassies and consulates in the region have sufficient staff resources” after the suspension of consular services in Ukraine, Russia and Belarus following Russia’s invasion.

The department officials added that they are “prioritizing consular support to U.S. citizens and their immediate family members.”

Refugees able to secure an embassy or consulate appointment then face another hurdle: proving their eligibility for a temporary visa. This requires applicants to demonstrate their intent to eventually return to their home country.

“Now, you have a Ukrainian applicant that needs to make that showing, they still need to overcome that burden, when your home is bombed out that could be a tough thing to do,” Strashnoy said.

“That’s where the challenge lies, not everyone is going to be approved for these types of visas,” he added.

One problem, Strashnoy said, is that, “the rules haven’t changed — there is no refugee visa in the United States. The tourist visa isn’t necessarily meant for refugees. It’s still meant for someone who is going for a short term purpose to the United States.”

Strashnoy and another Ukrainian-born immigration lawyer, Andrey Plaskin, said they have been inundated with frantic calls from people hoping to get refugee friends and relatives from Ukraine to the U.S.

“I’m getting a lot of phone calls from family members, in a lot of different situations," he added. "I have a mother I’m working with that has two little kids in Ukraine. She was able to get them out of the country, to Germany.”

Plaskin said he believes the State Department is trying to do the best it can.

“I’ve been getting messages from the National Visa Center stating that all Ukrainian cases are treated as priority and basically they’ll get to us when they get to us," he said. "So, how long that will take we don’t know."

It’s unclear how many Ukrainians want to enter the U.S. Both Strashnoy and Plaskin said they’ll do whatever they can to help Ukrainians navigate the process.

“I’ve been doing free consultations for any and all Ukrainians in this situation and I’ll continue to do so,” Strashnoy said.

“People’s lives are the number one priority,” Plaskin said. "But in general, seeing this is just unthinkable, it’s unimaginable.”