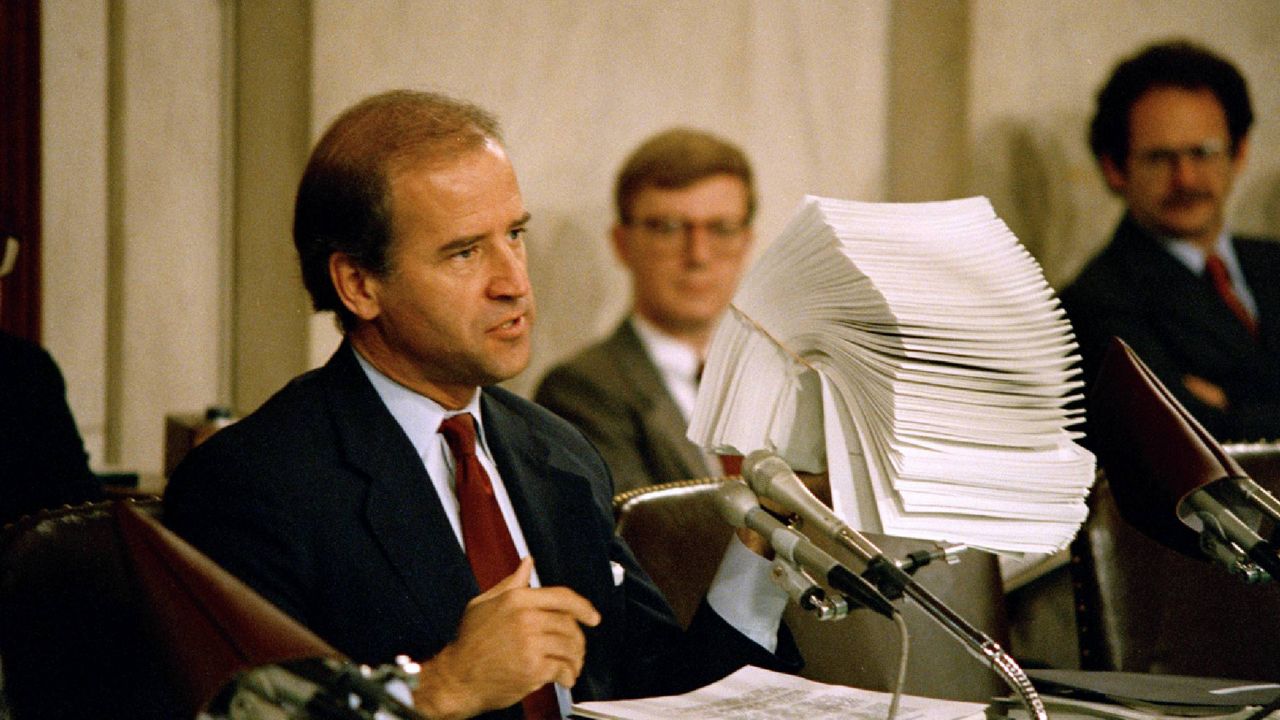 Joe Biden knows a thing (or 10) about the process of picking a Supreme Court justice, former advisers say

When it comes to the Supreme Court confirmation process, Joe Biden knows a thing or two — or ten.

That’s how many confirmation hearings he took part in as a U.S. senator — six of them as chairman of the Senate Judiciary Committee, which leads the hearings.

“He certainly has a PhD in the process,” said Jeffrey Peck, who served as general counsel to the committee under Biden’s leadership from 1987 to 1992.

As President Biden prepares to nominate his first Supreme Court justice, Spectrum News spoke to former advisers who say they expect him to approach the process of replacing Justice Stephen Breyer the way he did back then: by thoroughly reading material and in coordination with senators from both parties, bringing with him both tough lessons and core advisers from his days as chairman.

“He read all the nominees’ opinions if they were judges, all their speeches if they gave speeches, all their writings,” Peck, who now works as a lobbyist at the Tiber Creek Group, remembered. “He read every single thing himself.”

He pointed to then-Sen. Biden’s focus on the right to privacy, for example, a right not explicitly enumerated in the Constitution but interpreted and affirmed by the Supreme Court. Biden pressed now-Chief Justice John Roberts about it during his 2005 confirmation.

That attention to judicial detail was typical, said Neil Siegel, who served as special counsel to Biden during the confirmation hearings for Samuel Alito and John Roberts.

“I would write these memos on different areas of constitutional law that only a law professor could love,” Siegel, now a professor of law and political science at Duke Law School, told Spectrum News. “And I knew he was reading them because I saw he had marked up the drafts and was asking me questions — detailed questions — about them.”

Biden has promised to nominate the first Black woman to the court, someone he said will have “extraordinary qualifications, character, experience and integrity.”

“I’ll study their records and former cases carefully,” he said of the candidates last month when announcing Breyer’s retirement.

President Biden also said he’s focused on involving both Democrats and Republicans in the process, citing the “advice and consent” clause of the Constitution that calls on the president to seek both from senators when making nominations.

“He certainly genuinely believes in the consultative side,” Peck said. “He's showing that, as president, that it doesn't matter which end of Pennsylvania Avenue he's at.”

When Biden entered the Senate in 1973, the Supreme Court nominees he questioned and voted for often received broad, bipartisan support, a far cry from the fierce, partisan debates sparked by confirmation hearings today.

Biden presided over the hearing for Justice Anthony Kennedy, for example, who was confirmed by the Senate 97-0 under Ronald Reagan just a few years before Justice Ruth Bader Ginsburg took her seat after a 96-3 vote under Bill Clinton.

“You had consultation across party lines before nominees were chosen,” Siegel recalled. “I see the president as trying to return to normalcy or get back to a less bitterly partisan process.”

Biden said much the same in 1993: “Clearly the appointment of a Supreme Court justice is not a presidential prerogative,” the then-chairman said. “The Senate is an equal partner in the process.”

His handling of Clarence Thomas’s 1991 hearing has been a longtime mark on his political record, after Anita Hill accused Thomas of sexual harassment when the two worked together in the early 1980s.

Hill said Biden and the all-male judiciary committee treated her with disbelief and scorn, when she ultimately testified about the charges publicly after her accusations leaked to the press.

“The committee's ability to investigate and hold hearings on Professor Hill's charges has now dramatically changed by the events which forced Professor Hill — against her wishes — to publicly discuss these charges,” Biden said at the time. “Sexual harassment is a serious matter. And, in my view, any person guilty of this offense is unsuited to serve not only on the nation's highest court but any position of responsibility….”

Thomas was confirmed by the narrowest margin in history — 52-48 — with Biden and many Democrats voting against.

Biden later called Hill to apologize in 2019, telling The View he said he was “sorry she was treated the way she was treated,” though Hill has called for greater acknowledgement of the harm done by those hearings.

While Biden has said little to indicate who he’ll choose as the nominee, he has promised it will be a Black woman.

As he reviews his shortlist, he has by his side a key adviser from his days as chairman: current Chief of Staff Ron Klain, who worked as chief counsel to the judiciary committee from 1989 to 1992, some of the same years as Peck.

Former Sen. Doug Jones, D-Ala., will serve as the “sherpa” to the eventual nominee, guiding them through meetings with senators and other preparation.

“You don’t have the A team. You have kind of the A+ team working on this right now,” Peck said.

President Biden is expected to make his selection by the end of February.