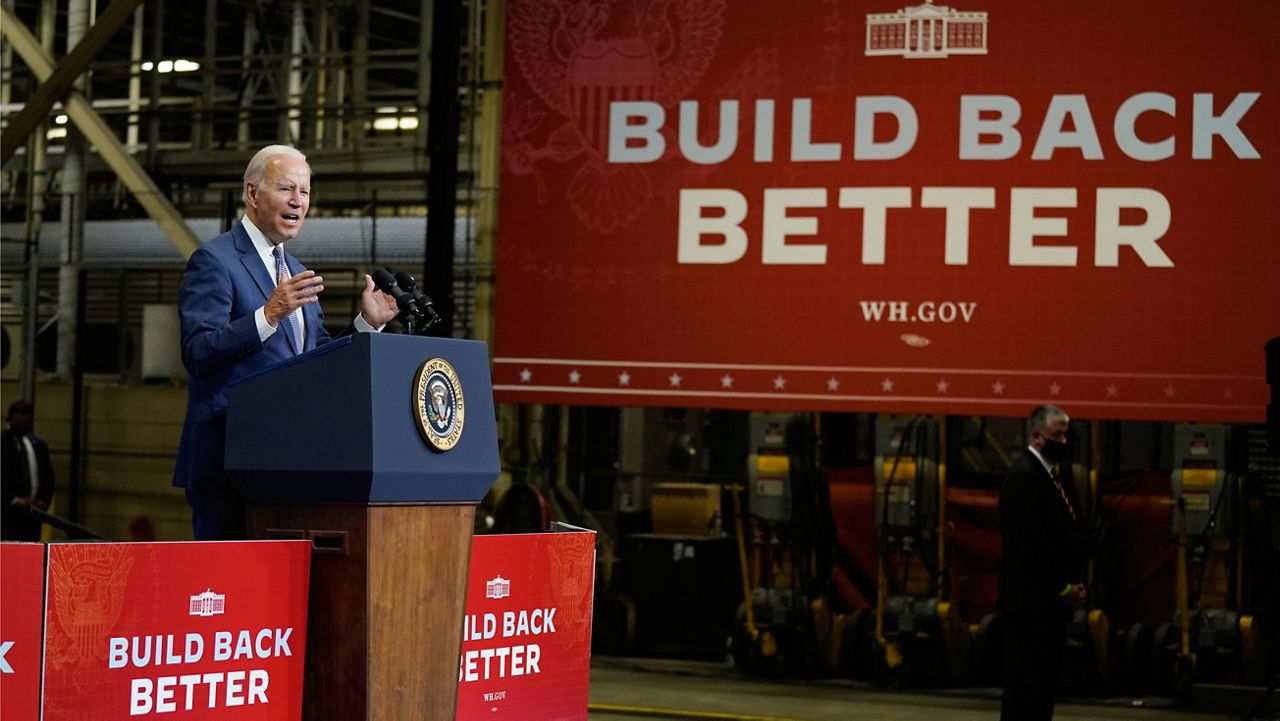 At a press conference the eve of his first anniversary in the White House, President Joe Biden said that the most likely path forward on his sweeping social spending and climate change bill, the Build Back Better act, will “probably” have to be broken up in order to get passed.

“It's clear to me that we're probably going to have to break [the bill] up,” Biden said Wednesday, adding: “I'm confident we can get pieces — big chunks — of the Build Back Better law signed into law.”

The nearly $2 trillion bill, one of the two pillars of President Biden's domestic agenda, needed the support of every Democrat in the House and Senate in order to pass due to universal opposition by Republicans. Negotiations on the measure hit a wall in December when West Virginia Sen. Joe Manchin, a crucial moderate vote, said he would not support the bill after weeks and weeks of dialogue between lawmakers.

Reuters reported this week that the White House was looking to restart negotiations on the bill, though what form Biden's strategy might take was not totally clear until the president's press conference Wednesday.

"I think we can break the package up, get as much as we can now, come back and fight for the rest later," Biden said Wednesday.

One of the "big chunks" Biden said he was confident could get passed was the more than $500 billion the bill calls for in clean energy initiatives, which the White House previously billed as the largest-ever legislative investment in combatting the climate crisis.

The clean energy initiatives laid out in the bill include incentives for businesses and individuals to shift from coal and fossil fuels to solar, wind and other green energy sources that do not emit carbon dioxide, roughly $320 billion in tax credits for those who buy and produce clean energy, up to $12,500 tax credits for people who buy electric vehicles, and billions to fund making buildings more energy efficient, research and development on carbon dioxide capturing technology, investing in clean energy trucks and public transit and the creation of a Civilian Climate Corps.

Those efforts are seen by some experts as crucial in order to get the U.S. closer to its goal of reducing carbon emissions.

“I’ve been talking to a number of my colleagues on the Hill,” Biden said Wednesday. “I think it’s clear that we would be able to get support for the $500+ billion for energy and the environment.”

Other initiatives in the House-passed version of the bill include a one-year extension of the child tax credit, universal pre-Kindergarten, child care subsidies, an expansion of Medicare to include hearing aid coverage and lowering prescription drug prices, including capping the price of life-saving drug insulin. The child tax credit was a particular sticking point for Manchin; the West Virginia lawmaker wanted to add a work requirement to qualify for the credit, a non-starter for Biden and the rest of the Democratic caucus.

Polling suggests that the bill is still incredibly popular among the American people.

The president also said that he knows there are a number of initiatives that Manchin and fellow moderate holdout Sen. Kyrsten Sinema, D-Ariz., "strongly support," specifically mentioning early education and some of the revenue sources of the bill.

Biden was also transparent about what initiatives he didn't think he'd be able to push through Congress at this juncture, but pledged to continue fighting for; extending the child tax credit and free community college.

"There’s two really big components that I feel strongly about that I’m not sure I can get in the package," Biden said. "One is the child-care tax credit, and the other is help for the cost of community colleges," Biden said Wednesday.

White House press secretary Jen Psaki told reporters on Thursday that while she would not "prejudge" what the final version of a bill might look like, she said the president had "proposed an extension of the child tax credit because it's something he very much believes in" as it "helped cut child childhood poverty by 40% last year."

Still, Psaki said, Biden will focus on areas where Democrats can agree, namely lowering prescription drug costs and the cost of childcare and healthcare.

"Are Republicans now against negotiating lower Rx drug prices?... if they allow us to claim all of those things on the Dem side, we'll take them"

Manchin told reporters on Thursday that he's open to returning to the negotiating table, but first wants to see inflation and the COVID-19 pandemic addressed first.

"The main thing we need to do is take care of the inflation," Manchin told CNN. "Get your financial house in order. Get a tax code that works and take care of the pharmaceuticals that are gouging the people with high prices. We can fix that. we can do a lot of good things."

Manchin said that negotiators "will just be starting from scratch" and did not outline a dollar amount for what he will accept, instead saying: "I want to see what's feasible, what we can do in a reasonable, feasible way."

White House Chief of Staff Ron Klain told the Wall Street Journal that the administration will resume talks directly with Manchin and Sinema on the bill, with the goal of getting a bill approved as soon as possible.

"One lesson we learned in the first year is, I think, the less we talk about our negotiations with specific senators and congressmen, the better we are, so I’m going to say our talks with Sen. Manchin will proceed directly and privately," Klain told the outlet.

Lawmakers cheered Biden's comments about coming back to the negotiating table on Build Back Better.

Sen. Ed Markey of Massachusetts, a staunch defender of the climate initiatives in the bill and urged swift action, especially on the clean energy funding.

"We need to move to pass a package now that has 50 votes," Markey told Axios. "The climate, justice and clean-energy provisions in Build Back Better have been largely worked through and financed, so let’s start there and add any of the other important provisions to support working families that can meet the 50-vote threshold."

"We need to do whatever is possible, and make it as broad and inclusive as we can," Connecticut Sen. Richard Blumenthal said to Axios.

"If we fail, we can come back and try to come forth with a more modest proposal," Senate Budget Chairman Bernie Sanders, I-Vt., told the Wall Street Journal. "I also believe that we have got to start bringing important pieces of legislation — one by one by one — onto the floor. And let the Republicans vote against them. And let Mr. Manchin and Ms. Sinema vote against them or not, whatever it may be."

With a 50-50 Senate and, according to the New York Times, every Republican in the chamber opposed to the bill, every Democratic vote is crucial in order to get this legislation passed.

The Times did report, however, that GOP Sens. Lindsey Graham of South Carolina and Lisa Murkowski of Alaska said they could support some of the climate change initiatives, though did not get into specifics.

"Some of it I might be able to support," Graham told the Times, while Murkowski said "Anything is possible as long as you have an attitude of goodwill and good faith negotiating going here."

That said, it would be difficult for Democrats to rely on that support. And with the 2022 midterm elections approaching, and the need to demonstrate that they can finally get this legislation over the finish line to retain control of Congress.

But some lawmakers think the better strategy may be paring down the bill, according to Axios, rather than breaking it into chunks, because it could create procedural headaches with respect to the budget reconciliation process – the mechanism by which budgetary mesures can pass the Senate with a simple majority instead of the 60 votes required to overcome the legislative filibuster.

Regardless, the common theme among Democrats is the need to get things done and deliver on their promises to their constituents.

"I think it’s really up to the president to get Sen. Manchin as close to the framework as possible," Washington Rep. Pramila Jayapal, the chair of the Congressional Progressive Caucus, told the Wall Street Journal. "The president is the only one who can really deliver that framework, he negotiated it. His credibility is on the line. We all compromised a lot to get to that framework.”

"We still remain hopeful that we're going to be able to find common ground with our Senate colleagues to get as much of the [Build Back Better bill] as is currently constituted," New York Rep. Hakeem Jeffries told Axios. "I do think that there's a real pathway to finding common ground with Sen. Manchin."