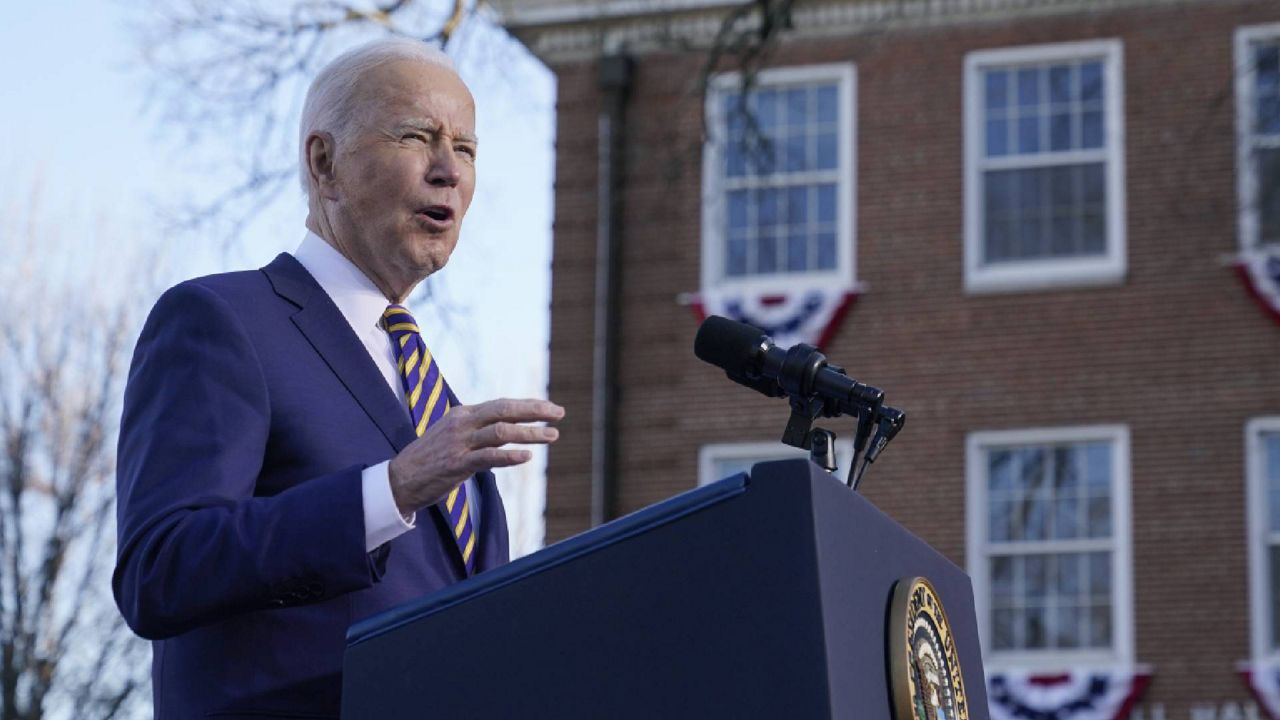 President Joe Biden made his strongest call for voting protections yet in Atlanta on Tuesday, painting the moment as a turning point and ushering in his own, new rallying cry by endorsing changes that could carve out a path to the passage of voting rights bills in the Senate.

Biden said he now explicitly supports a change to the rules in the U.S. Senate that make it difficult to overcome a 60-vote threshold to bring bills to a vote, in a chamber where Democrats hold only the slimmest of majorities.

"I'm tired of being quiet," Biden bellowed, slamming his hand on the podium.

"Today, I'm making it clear: To protect our democracy, I support changing the Senate rules whichever way they need to be changed to prevent a minority of senators from blocking action on voting rights," he said.

Democrats have launched a new push to move forward two pieces of federal voting legislation: the broader Freedom to Vote Act and the more-targeted John Lewis Voting Rights Advancement Act. Both face barriers in the 50-50 Senate, where Republicans can block debate on the bills.

After visiting the grave of Dr. Martin Luther King, Jr. earlier in the day with Vice President Kamala Harris, Biden in his speech invoked the name of Dr. King as the side of justice in the face of efforts to restrict people's rights.

"I ask every elected official in America: How do you want to be remembered?" he asked.

"Do you want to be the side of Dr. King or George Wallace?" he postured, using the name of Alabama's former segregationist governor.

“Will we choose democracy over autocracy, light over shadow, justice over injustice? I know where I stand. I will not yield. I will not flinch,” the president said. “I will defend the right to vote and our democracy against all enemies foreign — and yes — domestic."

In the audience was Martin Luther King III, MLK, Jr.'s son and civil rights activist, who released a statement in the hours after the speech, acknowledging the president's new push but warning that "he can’t rest this call at the feet of the Senate and walk away."

"He must use the full power of his office to ensure this Jim Crow relic finally falls," King said.

Biden and Harris on Tuesday spoke on the campuses of two historically Black colleges and in the former Georgia district of the late congressman John Lewis, a civil rights champion who worked for voting protections throughout his career.

Harris focused on the numerous laws passed in Republican-led states in the last year that make changes to voting access.

"Anti-voter laws are not new in our nation, but we must not be deceived into thinking they are normal," she said.

"And so the question is: Where will the institution of the United States Senate stand?" Biden asked the crowd.

Senate Majority Leader Chuck Schumer, had set a new deadline of Jan. 17 — Martin Luther King Jr. Day — for progress on voting rights legislation. If the deadline isn’t met, he said, the Senate would consider changes to the rule that requires 60 votes to end debate on a bill and move it to a vote.

“The Senate is going to act as soon as tomorrow," he said on Capitol Hill Tuesday.

What action Democrats will ultimately take remains highly uncertain, depending on the often elusive support of Sen. Joe Manchin, D-W.Va. Key Democrats have been meeting with Manchin for weeks, brainstorming options while also enlisting outside allies to lobby his support.

Manchin has made no firm commitments. He has repeatedly said he will not support lowering the filibuster’s 60-vote threshold for passing most legislation, a stance shared by fellow centrist Kyrsten Sinema, D-Ariz. Until the threshold is lowered, enacting election legislation could prove difficult, if not impossible.

Psaki on Monday acknowledged that it would be difficult to predict how big of a role Biden and the executive branch might play in moving voting legislation forward.

“It’s a hard question to answer because really what we're talking about is whether we can get enough votes in Congress to get this done,” she said.

"It's up to individual senators to make their decisions," Psaki said Tuesday.

Some civil rights leaders did not attend on Tuesday in protest of what they say is administration inaction.

“We’re beyond speeches. At this point, what we need, what we are demanding, is federal legislation,” said LaTosha Brown, co-founder of Black Votes Matter. And it can’t happen soon enough, she said.

In the last year, 19 states have passed 34 laws restrictive to voting, according to the Brennan Center for Justice, the most in any year since the organization began tracking voting legislation in 2011.

They include laws that shorten the window to request mail-in ballots, reduce the number of mail-in ballot drop boxes, impose stricter signature and voter ID requirements, and reduce polling places and voting hours.

Democrats’ voting legislation would usher in the biggest overhaul of U.S. elections in a generation, striking down hurdles to voting enacted in the name of election security, reducing the influence of big money in politics and limiting partisan influence over the drawing of congressional districts. The package would create national election standards that would trump the state-level GOP laws. It would also restore the ability of the Justice Department to police election laws in states with a history of discrimination.

The bills have faced harsh criticism from conservatives, who insist record voting numbers in 2020 are proof there is no restriction effort.

“The turnout numbers show that no votes are being suppressed anywhere,” said Hans von Spakovsky, an election law expert at the Heritage Foundation.

“Both of these pieces of legislation are dangerous and, frankly, reckless,” he added. “(They are) just an interference, unneeded, with the choices that voters and their elected state representatives make on what the rule should be for elections in their states.”

Civil rights activists, meanwhile, are deeply frustrated by the turn of events, saying precious months have been wasted. They view the GOP-backed changes in voting laws as a subtler form of ballot restrictions like literacy tests and poll taxes once used to disenfranchise Black voters, a key Democratic constituency.

“Unfortunately many policymakers have not truly appreciated the gravity of where we are in this nation at this moment,” NAACP President Derrick Johnson said in an interview with The Associated Press, singling out both Biden’s White House as well as Senate Democrats. “African Americans have seen this before. We’ve experienced this before. We must get beyond procedural conversations and get to the substance of protecting this fragile thing called democracy."

For at least one prominent voting rights advocate, Georgia gubernatorial candidate Stacey Abrams, the absence from Biden's speech on Tuesday was attributed to a "scheduling" mix up, per President Biden.

"We have a great relationship," Biden said of Abrams at the White House before leaving for Atlanta. "We're all on the same page."