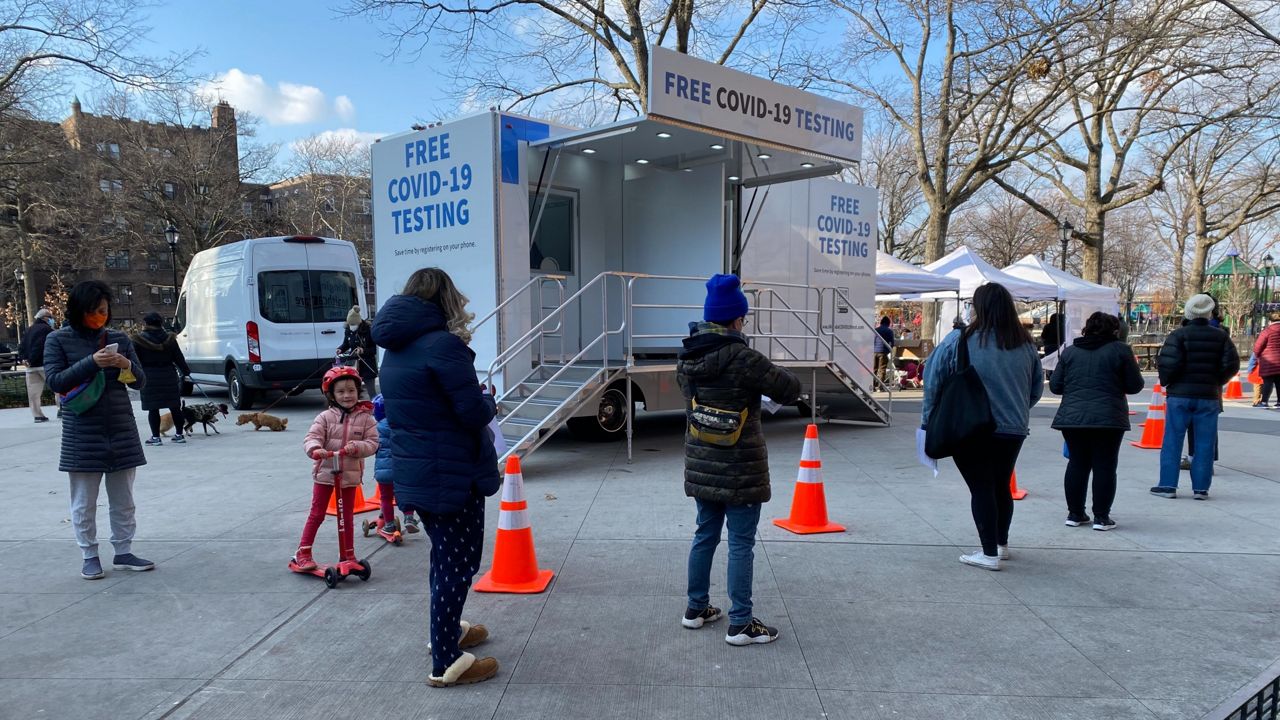 New testing sites to open in NYC as omicron surges

New York City will get several new testing sites in the coming days in a joint effort by the city, state and federal governments to decrease wait times for COVID-19 tests as the latest surge in infections, powered by the omicron variant, continues to grow.

The new sites are coming online just as the Christmas travel period begins, and as the city breaks new records for infections counted in a single day, even as hospitalizations and deaths remain relatively low.

Beginning Wednesday, existing testing sites run by the city’s hospital network, NYC Health + Hospitals, will expand their hours to be open from 7 a.m. to 7 p.m.

On Thursday, the city will launch a moving fleet of five vans – one for each borough – that will be distributing at-home rapid tests. The city expects the vans to hand out 2,000 tests per day, said Dr. Ted Long, who leads the city’s Test and Trace program.

The city is also getting new mobile sites operated by the Centers for Disease Control and Prevention. The sites are all located in Queens, and will be open from 9 a.m. to 5 p.m.

The CDC will open additional mobile testing units next week, according to Health + Hospitals, though the CDC has not said where those units will be located.

“Testing locations are determined in concert with the state or large city (like NYC) where the mobile units will be,” said Kristen Nordlund, a spokesperson for the CDC. “Additionally, we try to ensure that mobile units are in areas that score high on the Social Vulnerability Index, areas with substantial or high COVID-19 transmission rates, and low vaccination.”

Beginning on Monday, Dec. 27, the state is also opening testing locations at two major subway hubs: At Times Square-42nd Street, from 8 a.m. to 2 p.m., and at Grand Central Terminal from 3 p.m. to 8 p.m. The sites will not be open on New Year’s Day.

Between the new test sites and the increasing use of at-home rapid tests, the city will soon hit about 200,000 tests per day, Long said. Tests conducted by city-run sites account for about a quarter of current testing capacity, Long said.

The time it takes to process COVID-19 tests has been increasing at both city-run and private test providers, Long said. The city’s testing labs are making “substantial operational changes” Wednesday in order to reduce turnaround times, he added.

“We’ve already been doing double what we were doing three weeks ago, and were planning on doubling that again,” Long said.

Yet the added federal testing capacity comes as CityMD, a chain of urgent care clinics, said it was temporarily shutting down 13 locations across every borough besides Staten Island. The company said the closures were meant to avoid staffing shortages at other locations, which are seeing high demand for tests.

Wait times at city-run sites are rising as well. A regularly updated dashboard of Health + Hospitals locations showed Wednesday afternoon that just three of 26 sites reporting their wait information had wait times under 30 minutes, with most reporting waits of one to two hours.

Recent city data show that just over 10% of tests in the city are coming back positive, even as the number of people tested each day has jumped by about half from a month ago.

Yet hospitalizations, though increasing, remain a fraction of what the city saw in last winter’s surge, and daily deaths due to COVID-19 are rising only slightly.

Meanwhile, the city is providing community organizations 500,000 rapid at-home tests to hand out at no cost to the person who gets them. Masbia Soup Kitchen Network received a delivery of test kits Wednesday night.

"I think it’s a wonderful idea," Ariel Mullodzhanov, a supervisor at a Forest Hills Masbia Soup Kitchen Network location, said before the delivery. "It prevents people coming out and standing in lines in clusters to help prevent the spread of the virus."