Lines for coronavirus tests are growing around the city, accompanying a rise in COVID-19 cases and hospitalizations as the weather gets colder and more people attend year-end family, friend and work gatherings.

While health experts say the increasing cases could be blamed on the spread of the omicron virus, the long lines are being driven by a national test shortage and reduced testing hours at some city sites, even as the city expanded its mobile testing fleet last month, according to health experts and elected officials.

The result, they say, is that the city is not prepared to meet testing demand even as it experiences yet another wave of COVID-19 cases.

“It’s just infuriating that two years into this, it's still impossible to get a test,” said Mark D. Levine, a City Council member representing upper Manhattan.

Lines have been growing around the country for weeks, as cases rise nationwide.

Across social media, complaints of long lines for tests have become increasingly common, with even elected leaders voicing their shock at the mass of people waiting to go for a nasal swab at an urgent care or a mobile testing site.

In a news briefing Thursday, de Blasio said the city would ramp up its testing capacity. He said more mobile and brick-and-mortar sites will be created, and hours will be expanded at already existing sites. He also said the city will work with community organizations to distribute 500,000 rapid at-home tests to New Yorkers for free.

The jump in testing demand is coming after a series of major gatherings in the city, starting with an anime conference at the Javits Center earlier this month that saw multiple confirmed cases with the omicron variant, as well as the drunken SantaCon festivities this past weekend, in which thousands of people bar-hopped through Manhattan.

Had to come to Wall Street for a #COVID test because I couldn’t get one by me. Saw this line at @CityMD as I was going into my own appointment. 😵

At a CityMD urgent care center on Atlantic Avenue in Brooklyn on Thursday morning, people at the front of the line said they had been waiting for hours.

“I’ve tried three other locations this morning that had waits of more than two hours,” said Marie Li, who added that she was getting tested because she’s had lots of friends she’s seen in recent weeks test positive themselves. “This is kind of a last resort.” 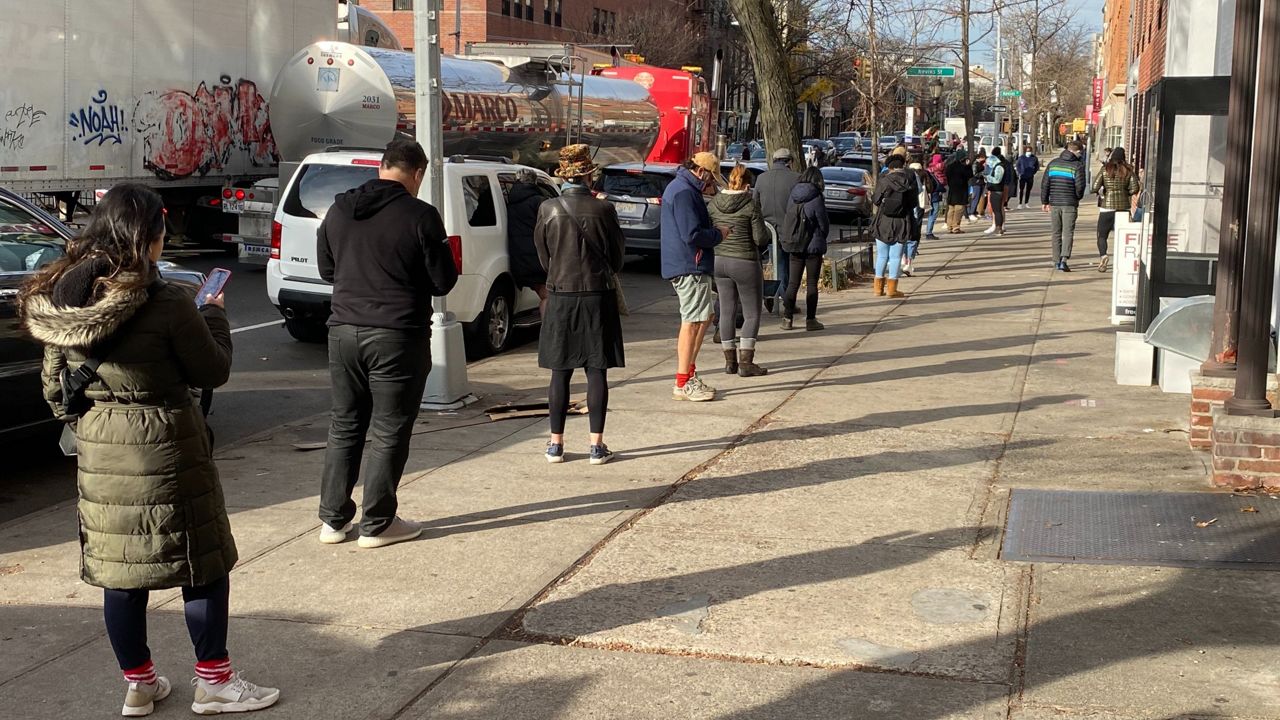 People waited for a coronavirus test on Atlantic Avenue in Brooklyn on Wednesday morning. (NY1/Nicholas Wetzel)

City-run sites are also experiencing waits, according to an online dashboard. Of 31 city-run sites offering COVID-19 tests, only 13 had reported wait time data as of late Thursday morning. Of those, seven posted wait times of between 30 and 60 minutes.

Representatives for the mayor’s office and the Health + Hospitals system did not immediately respond to a request for comment.

Demand is growing after a Thanksgiving weekend when many families gathered in large groups, and because many workplaces and schools now require testing for people who have been exposed to confirmed cases, said Denis Nash, an epidemiologist at the CUNY School of Public Health.

The issue is compounded by a near-total lack of over-the-counter, at-home rapid tests from pharmacies, Nash said.

“These lines seem to be getting bigger despite the fact that there are more mobile test sites popping up around the city,” Nash said. Last month, Mayor Bill de Blasio announced that the city was expanding its mobile testing fleet from 40 to 70 vans.

While the increase in test demand is partly due to residents traveling and seeing friends and family, COVID-19 cases and hospitalizations are increasing in the city.

The seven-day average of new daily cases is nearing 4,000, city data show, the highest numbers since the beginning of April, when the second mass wave of infections over the pandemic winter began to fall.

Hospitalizations and deaths, however, are not seeing the same jumps: Hospitalizations, while rising, are at about a third of the rate of early April, and deaths have been essentially flat since the middle of August.

Those numbers indicate that the city’s wide vaccination coverage is leading to fewer cases of the COVID-19 disease stemming from coronavirus infections, and milder cases of the disease overall, health experts say.

More than 90% of city residents have received at least one vaccination dose, according to city data.

At the same time, however, anyone who has not received a booster shot six months after a Pfizer or Moderna course, or two months after a Johnson & Johnson vaccine, is now technically under-vaccinated, according to Melody Goodman, a biostatistician at New York University’s School of Global Public Health.

“The challenge is the term ‘fully vaccinated’ has now changed, but people haven't changed with it,” Goodman said. “We knew in the beginning that we were likely gonna have a booster, but I think the general public has not necessarily prepared themselves for that reality.”

But health experts also believe that the climbing rates of infection are likely due to ongoing spread of the delta variant of the virus, compounded by the introduction of the omicron variant, which the city health commissioner, Dr. Dave Chokshi, said last week was likely at the level of community spread.

“We have a hybrid situation of two very transmissible and rapidly spreading variants,” said Nash.

Dr. Jay Varma, a former top health adviser for the city, noted on Twitter that the city has never seen test positivity rates double in just three days, going from just under 4% on Dec. 9 to nearly 8% on Dec. 12.

Um, we've never seen this before in #NYC.

Note: Test % is only for PCR & NYC does more per capita daily than most places ~67K PCR/day + 19K [reported] antigen over past few days (1/2) pic.twitter.com/PhxsZq55jn

Levine, alongside other elected officials, has been calling on the city to distribute free rapid tests at libraries, schools and other community sites, or send them to residents by mail, as other countries have done.

“The fact that we’re still making people go places and wait hours in line, it's really unacceptable,” he said.

Yet test demand is only expected to increase, as travel increases going into Christmas, and as the city’s wave of infections continues to grow, Nash said. The question, he added, is whether preliminary data about the omicron variant, suggesting that it spreads rapidly does not cause as severe disease as delta, holds true.

“So far we’ve been able to absorb the surges in cases without major rises in hospitalizations and deaths,” he said. “It depends on how we’ll cover those older and medically vulnerable people with boosters.”

Health experts are skeptical that the city will impose stricter safety measures. De Blasio has repeatedly said he wants to avoid another full shutdown at all costs, and recently demurred in a news conference when asked if the city would be advising against gatherings of multiple households during the holidays.

But Goodman said that even though cases appear to be mild, residents should still be as cautious as ever, given the unknown risks of contracting a chronic version of COVID-19, often referred to as “long COVID.”

“You could have a mild case now, but you could still have symptoms for the rest of your life,” Goodman said. “You’re making a risk assessment that you don't really have the data to make.”