VP Harris, Treasury announce $8.7B for lending in minority communities

Partially a result of her work while in the U.S. Senate, Vice President Kamala Harris on Tuesday announced the release of $8.7 billion in treasury lending for minority communities as she spoke alongside Secretary Janet Yellen at a banking forum focused on the racial wealth divide.

She announced the billions of dollars in funding as part of the Emergency Capital Investment Program (ECIP), which was approved by Congress in late 2020 to provide loans, grants and forbearance for small and minority-owned businesses, plus low-income and underserved communities who might be especially impacted by the pandemic.

The vice president spoke about the program and her work on economic justice at the Treasury Department’s headquarters in Washington as they hosted the annual Freedman’s Bank Forum.

The $8.7 billion will go to more than 180 banks around the country that are either minority-owned or focus on underserved communities, after an application process that ended in September.

“Deep racial disparities continue to hold people back from achieving all they can,” Harris said.

“Today, the wealth gap persists. Today, the homeownership gap persists,” she added of the need for the investments. “Black entrepreneurs are three times more likely to report that a lack of access to capital negatively affects their profit margins.”

As a senator, Harris worked on the bill to establish the ECIP program, which was eventually folded into the second major coronavirus relief package and signed into law in late 2020 by then-president Donald Trump.

Here’s a look at the Cash Room in the @USTreasury Department building — where the @VP and @SecYellen will soon speak at the Freedman’s Bank Forum, announcing an $8.7 billion distribution for banks that focus on underserved populations & minority-owned financial institutions: pic.twitter.com/doMUCOUMMN

Yellen stressed that there would be a direct link between the money being provided and businesses in local communities, saying that she recently met the owner of a tea company in Atlanta called “Just Add Honey” who lacked the financial credit to keep all her shops open during the pandemic.

“Here, it’s very easy to connect the policy with the personal,” Yellen said. “What this will do is prevent small business owners of color from closing two of their locations. And better yet, it will help people open two more.”

Black Americans represent 13.4% of the U.S. population, yet Federal Reserve figures show they control just 4.3% of household wealth. More than half of Black household wealth is in the form of pension entitlements, which cannot be passed along to future generations. This inequity makes it harder for people living in predominantly Black communities to qualify for business loans and mortgages in ways that could help build their net worth.

Harris on Tuesday spoke about how many financial systems were not built to boost communities of color and were instead “designed to benefit other people.”

“It’s about restructuring a system,” she said. 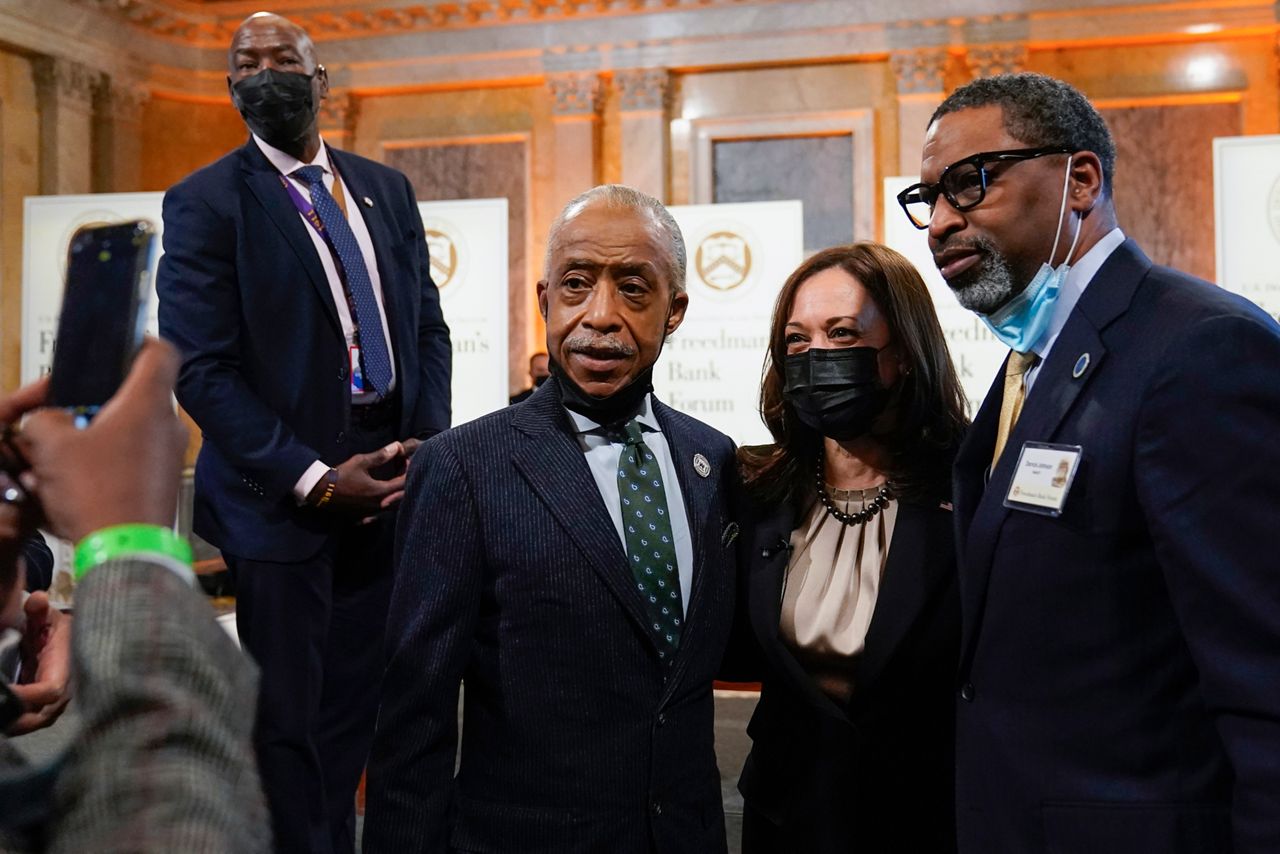 And the vice president drew a direct line from voting rights — an issue President Joe Biden tasked her with overseeing — to the issue of economic justice and racial wealth disparities, calling it an “ongoing, blatant challenge” to democracy.

“We should see the natural progression of where this could end up on many issues, including the issue of whether we have a society that allows small businesses to thrive, communities to grow economically,” Harris said.

The $8.7 billion highlighted Tuesday will be going to institutions headquartered in 36 states, as well as Guam and Washington, D.C. Roughly 54% of the funds is going to banks and 46% to credit unions. The distributions will range from more than $200 million for the largest institutions to less than $100,000 for smaller ones.