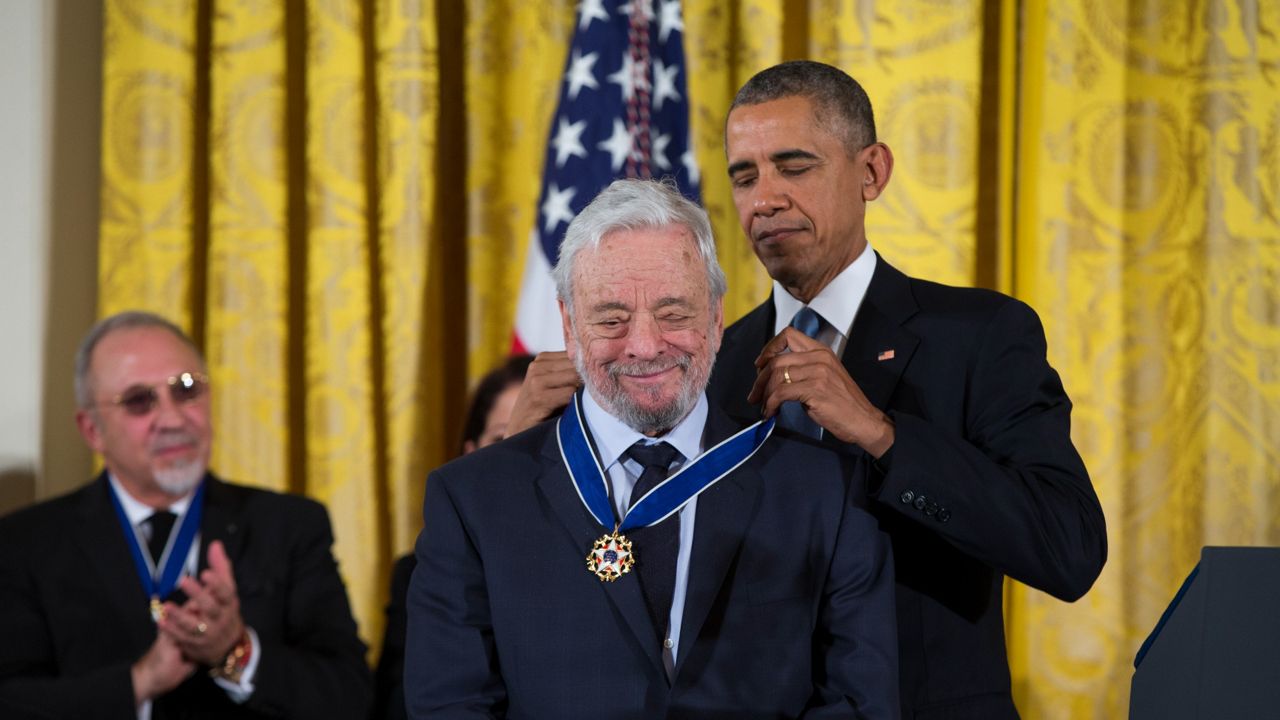 President Barack Obama, right, presents the Presidential Medal of Freedom to composer Stephen Sondheim during a ceremony in the East Room of the White House, on Tuesday, Nov. 24, 2015, in Washington. (AP Photo/Evan Vucci)

Widely known in theater circles as the "God" of musicals, Stephen Sondheim reinvented the art form as we know it today.

From contributing lyrics to such groundbreaking works like "Gypsy and "West Side Story" to masterpieces like "Sweeney Todd: The Demon Barber of Fleet Street" and "A Little Night Music,” during his reign, Sondheim was an artist who was at the forefront of his craft.

Born in New York City in 1930, Sondheim's passion for musical theater was nurtured in his early years by another musical titan, Oscar Hammerstein II, who served as a teacher and father figure to him.

Sondheim made his Broadway debut in 1956, writing the title song for the play, "Girls of Summer.” A year later, he joined forces with composer Leonard Bernstein and book writer Arthur Laurents to create the Romeo and Juliet-inspired musical "West Side Story.” Following "West Side Story,” in 1959, Sondheim and Laurents collaborated with composer Jule Styne on "Gypsy.” With "Gypsy,” Sondheim gave voice to the mother of all stage mother's, Momma Rose.

In the early 60s, Sondheim was praised for his musical farce, "A Funny Thing Happened on the Way to the Forum.” It won the 1963 Tony Award for Best Musical and marked Sondheim's first Broadway show as both composer and lyricist.

His next hit came in 1970 with "Company,” a musical about a bachelor being pressured to settle down by his married friends. A reworked version of the musical starring Tony winner Katrina Lenk is currently in previews on Broadway and is set to open in early December.

Following "Company,” he went on to compose more than a dozen original works that appeared both on and off-Broadway, including "Follies,” "Merrily We Roll Along,” "Into the Woods,” "Assassins,” and "Passion.”

Over the years, he’s won nine Tonys, including a lifetime achievement honor in 2008. In addition to his Broadway accolades, he was awarded multiple Grammys, an Academy Award, and the Pulitzer Prize in 1984 for his musical "Sunday in the Park With George.”

In 2010, The Roundabout Theatre Company debuted "Sondheim on Sondheim" on Broadway.  The show, which was conceived and directed by Sondheim's longtime friend and collaborator James Lapine, was a revue of the Sondheim song catalog, and featured taped interviews with the composer. Also in 2010, in celebration of the artist's 80th birthday, the Roundabout renamed Broadway's Henry Miller's Theater the Stephen Sondheim. It was a gift fit for a king, the forever king of Broadway.