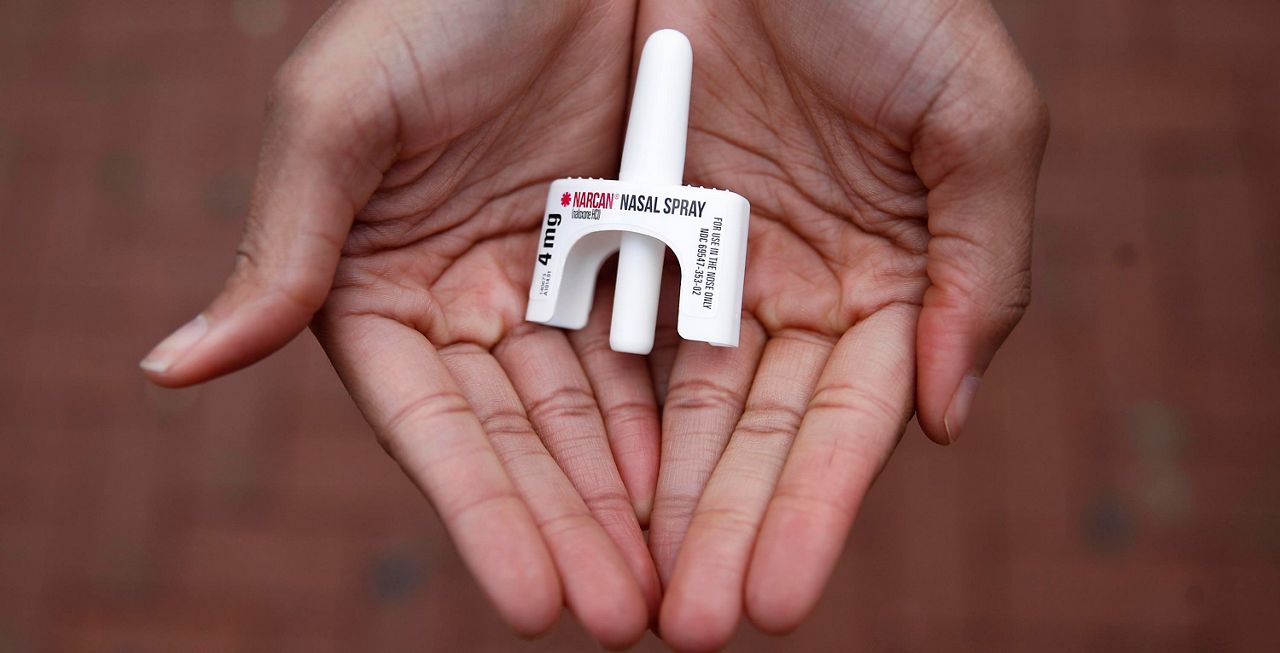 An epidemic inside of a pandemic: Drug overdose deaths spike amid COVID-19 crisis

It was a typical Tuesday morning for Donna Mina last fall, but she couldn’t shake the feeling that something was off.

She was up before 9 a.m. and she noticed her son, Paul, who lived downstairs in their Staten Island home, didn’t leave for work that morning.

She asked him about it, but he didn’t give her much of a response. He wasn’t a morning person, so she didn’t press it, she said.

Donna told her eldest son that she loved him and that she was worried about him, as mothers tend to do.

But Paul, 32, told her not to worry and reminded her that she’s always worrying, she said, so she left shortly after for her regular morning walk.

It was the last time she’d talk to Paul. Later that afternoon, he died of a drug overdose.

Paul, who died on Sept. 22, 2020, was one of about 2,245 people in New York City to die of an opioid overdose during the COVID-19 pandemic between March 2020 and March 2021, according to provisional data from the U.S. Centers for Disease Control and Prevention. This was up nearly 40% from the previous year, according to CDC provisional data.

Officials expect the number to rise as overdose data becomes finalized, making 2020 the deadliest year on record for drug overdoses in the city, according to health department officials.

And while overdose deaths had been steadily rising during the years before the pandemic, experts say the problem grew worse after the city shifted its efforts to battling the COVID-19 virus, making it harder for people struggling with addiction, like Paul, to access the resources they relied on for sobriety.

“The pandemic definitely caused a lot of anxiety, a lot of stress,” said Donna Mina about her son.

Many recovery centers shut their doors or reduced capacity when the virus first hit the city. There was also the additional burden of presenting a negative COVID test to access treatment. But rapid COVID tests weren’t easy to come by early in the pandemic and for someone seeking care for addiction, time isn’t a luxury they can afford.

When Paul -- who does not share the same last name as his parents -- relapsed in April 2020, he told his father he needed to enter a recovery center immediately.

“But all the yeses came with a COVID test and nobody could get me a COVID test, a rapid COVID test at that time quick enough,” Mina said. “I won't be here Monday, he says to me.”

They finally found a place that night in Pennsylvania that was covered under Paul’s insurance as a city employee with the Department of Parks & Recreation. He stayed for 30 days.

Substance use disorder service providers such as Phoenix House say the pandemic put additional pressure on them.

“Over the last year and a half the behavioral healthcare workforce has been faced with challenges bigger than we've ever seen — an opioid epidemic inside of a COVID-19 pandemic,” said Shaun Willis, director of Recovery Services and Community Outreach for Phoenix House, a network of recovery centers in New York City and Long Island. “It's been challenging to say the least.”

Willis said the pandemic hurt the group’s ability to do referrals. Without the foot traffic coming in, there wasn’t a way to connect people to the resources they needed like housing or benefits counselors.

There was also the issue of physical isolation, which not only exacerbated mental health issues such as anxiety and depression, but also increased the chances for overdoses.

“‘Don’t use alone’ is a safety mechanism that we talk about so with the pandemic there was a lot of isolated use,” Willis said.

But this ran counter to reigning public health guidance last year with quarantine and social distancing mandates in place.

The numbers have gone up even as the total number of calls to 911 EMS has decreased. That trend is reflected in this year’s numbers so far.

How COVID made the threat of fentanyl worse

The overdose last year wasn’t the first for Paul.

But this time was different because of fentanyl.

Fentanyl used to mainly be a filler drug for opiates like heroin, but dealers during the pandemic began bulking out their products amid limited supplies and rising costs as a result of the disrupted global supply chains that impacted nearly every industry.

It’s now found in more types of drugs, including cocaine, methamphetamine and other benzodiazepines and opioid analgesics acquired from non-pharmaceutical sources, according to the New York City Department of Health and Mental Hygiene.

New York Police Department data found that more than 80% of heroin tested contained fentanyl in the last quarter of 2020.

Paul’s toxicology report revealed he had more fentanyl in his system than any other narcotic, his father said.

The threat of fentanyl-laced drugs is so prevalent in New York City and across the greater Northeast region of the United States, that providers say it’s safe to assume that all non-pharmaceutical drugs are laced with it unless proven otherwise.

“We definitely know that fentanyl is now really a stable part of the drug supply,” said Dr. Chinazo Cunningham, executive deputy commissioner of Health and Mental Hygiene. “That was not the case a few years ago and so we're seeing increasing proportions of fentanyl-related overdose deaths.”

Fentanyl is 100 times more potent than heroin and only requires a few salt-like grains to cause an overdose, officials said.

When Robert Mina found Paul in his bathroom that Tuesday afternoon in 2020, he administered CPR but it didn’t help.

He grabbed Narcan that he had upstairs and administered it, but it didn’t work.

Mina was still pumping Paul’s chest when the first responders came and took over.

“They hit him with Narcan,” he said. “They injected him with something. They just couldn't get him. It was the fentanyl.”

The city’s publicly available overdose data only goes through September 2020, a lag of more than a year. And those numbers, including 2019 overdose numbers, are still classified as provisional.

“While it is typical to have some lag time in reporting overdose deaths for the prior year, data from 2019 and 2020 have been uniquely impacted by the COVID-19 pandemic at the level of turnaround times for these kinds of investigations,” a Department of Health spokesperson said.

Still, based on the first three quarters of data from last year, officials say that 2020 is on track to be the worst year on record for overdose deaths in the city.

“If there's catching up they have to do then we need to do it right away,” Mayor Bill de Blasio said in response to a question from NY1 at a news conference last week.

Overdose data is collected and reviewed by the health department’s Bureau of Vital Statistics and the Office of Chief Medical Examiner. And while in pre-pandemic times, the process could be lengthy, this delay in information gathering is unusually long, officials said.

“We need to catch up, it’s important,” the mayor said. “They have had -- other offices, I'm not going to judge other offices -- I'm glad for the work that they do, but what the Department of Health has been doing has been seismic and overwhelming.”

Donna and Robert Mina said it took seven months for them to get the results of the autopsy.

Every time they called the Office of the Chief Medical Examiner to check on the status, they said the response was that the department was backed up because of COVID.

“I became friendly with this girl Christine on a first name basis,” Donna Mina said. “I’m like, ‘Christine, did it come back yet?’ ”

The delay in information can have concrete implications for the communities that are impacted.

Even organizations trained in serving high-risk populations, such as BronxWorks, had to deal with unexpected circumstances during the pandemic.

At one of their drop-in centers for people who are homeless, there were three overdoses in the same bathroom over three consecutive days last year. One was fatal, and the others were near-misses, assistant executive director Scott Auwarter said.

“It's almost as if there was a bad batch or something that was going around,” he said. “The delays [in information] just make it harder to respond in real time.”

That’s why organizations like Phoenix House are pushing to make prevention strategies like free access to fentanyl-testing strips and Narcan kits, which usually requires a doctor’s prescription, more widely available at places like bars, clubs and other places where people typically use drugs.

“This is an opioid crisis, but it's actually an access crisis to treatments that we know work and save lives,” said Dr. Alexis Vien, medical director of Phoenix House.

Many service providers and advocates feel that addiction treatment hasn’t been prioritized for years and that COVID only exacerbated the issue.

“The funding for substance use disorders has stagnated for decades and we've been doing more with less,” Willis said.

“This is the new pandemic now, but it's not being addressed like a pandemic,” Robert Mina said.

Those on the frontlines of this work, and people directly affected, like the Minas, are fighting to make this issue a priority through things like funding and policy.

They’re also trying to fight the stigma around addiction by sharing Paul’s story.

“We're losing our own children, and we're losing a generation here,” said Robert. “We can’t keep doing this.”