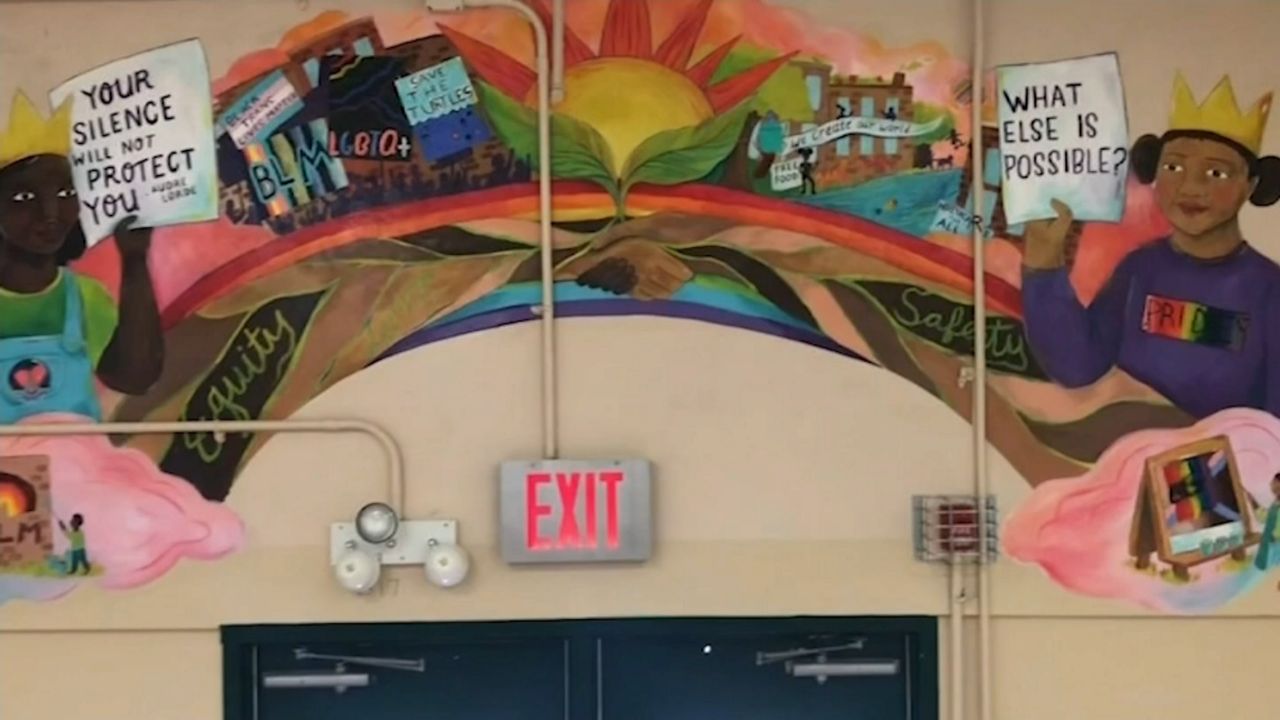 Representatives with Groundswell NYC, a group of artists that worked with the students on the mural, said that they were told the principal of M.S. 443, which shares the building with P.S. 295, did not approve of the mural and ordered that it be taken down. Photo by Spectrum News NY1.

From the outside looking in, it would be hard for the average community member to know that a controversy has been brewing inside the Brooklyn school building that houses P.S. 295 and M.S. 443.

Parents and even students at P.S. 295, who spoke with NY1 on Wednesday, said that things have been tense since their children returned to school in September.

At issue is a mural, created by six 5th grade students at P.S. 295 that was removed shortly after it went up in July.

The NY Daily News first reported on the story over the summer.

The mural was placed over a doorway in the cafeteria, a space shared by both P.S. 295, also known as The Studio School of Arts and Culture, and M.S. 443.

“He’s at the school to be able to express himself through art and through culture and if that can just be destroyed or thrown away then he doesn’t feel supported by that,” said Neil Hellegers, the parent of a third grader at P.S. 295.

On Wednesday, nearly 300 parents, teachers, students of P.S. 295 and elected officials participated in an online town hall about the mural’s removal in a call to action.

Participants of the virtual meeting said that they haven’t received any sort of explanation directly from the principals of P.S. 295 and M..S 443 as to why they approved the removal of the mural.

“You have a beautiful program of teachers and staff working here yet the leadership of the principals of P.S. 295 and M.S. 443 decided to take this down because they found it divisive somehow,” said Sunny Jain, the parent of twin second graders at P.S. 295.

Parents at the school say they’ve been told by teachers who oversaw the project, that it was removed at the request of the principal at M.S. 443.

Parents added that this was despite the fact that the principal of P.S. 295 approved the project, after seeing a final draft of what it would look like.

It was also funded with $20,000 secured by Councilman Carlos Menchaca, who organized Wednesday’s online town hall about the mural.

The mural included words like BLM and LGBTQ+, and also included phrases like “Save the Turtles” and “We Create Our World.”

Students who participated in the creation of the mural volunteered to meet twice a week over 14 weeks to take part in a project and said that they hoped it would be something their classmates would also enjoy.

They said they wouldn’t be given that opportunity because the mural was removed before the start of the school year and without being given a chance to make any revisions.

Several students who spoke with NY1 said that they thought the removal of the mural was unfair and that they felt betrayed by the school administrators they expected would respect and encourage their views.

“Our schools must be safe and inclusive environments and we’re very sorry this happened to our students. We are assisting the schools to come to a resolution, convening mediations, and will take disciplinary action as appropriate following the outcome of the investigation,” said Nathaniel Styer, deputy press secretary for the city’s Department of Education.

It appears as if there will be a number of stakeholders working to ensure that there is some accountability in the future.

Among those in attendance at the online town hall included a representative for Congresswoman Nydia Velasquez, several members of NYC Council and Public Advocate Jumaane Williams.