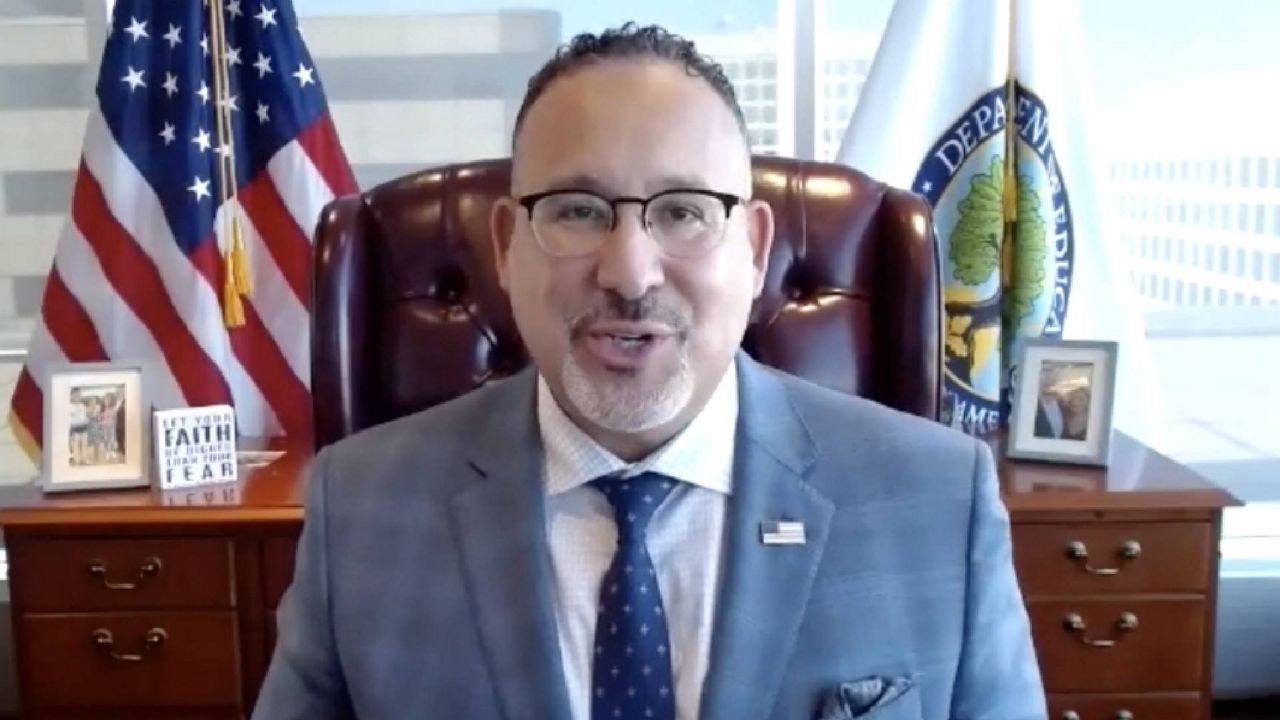 Education Secretary Miguel Cardona on Wednesday called changes to Florida’s quarantine policy for students “unfortunate,” a week after the state implemented a new rule that does not require kids to leave school if they were nearby someone who tested positive for COVID-19.

The education secretary spoke to Spectrum News as at least a dozen schools were temporarily closed because of coronavirus outbreaks around the country and thousands of students were quarantined, as the Department of Education calls for 100% in-person learning this year.

Sec. Cardona said the Florida rule – implemented by the state's new surgeon general Dr. Joseph Ladapo – was disappointing because health experts and officials now “know what works” to fight the pandemic in schools.

The new policy leaves it up to parents about whether their child should quarantine, and it’s only required once they show symptoms.

“It's unfortunate that there are different rules. We know what works,” he told Spectrum News Wednesday. “What that does is really affect our vulnerable students who may have underlying health conditions — their ability to access school and also the confidence in the schools.”

“Our students have suffered enough,” he added.

In a statement emailed to Spectrum News, a spokesperson for Gov. DeSantis fired back at the education secretary: “Secretary Cardona is not a medical doctor and should refrain from making derogatory comments about the policies enacted by our state surgeon general, who is a medical doctor.”

Cardona also said the department was reaching out to schools that have temporarily closed or had to quarantine large groups of students, in addition to providing guidance for in-person learning.

“At the end of the day, I've picked up the phone and I've called superintendents. I've called principals. How can we support you?” he said. “We have a shared goal of helping children thrive.”

The Department of Education also recently gave funds to Florida school districts who defied Republican Gov. Ron DeSantis’ ban on mask mandates, and the department's Office for Civil Rights launched an investigation into the ban earlier this month to determine whether it may be harmful to kids with disabilities or who are at higher risk of severe COVID-19.

Cardona acknowledged Wednesday that quarantining students and staff would be part of the process of going back to in-person learning.

“We are still in a pandemic, right? And that's why every chance I get, I promote the use of the mitigation strategies,” he said, adding: “Across the country, students are expected to be in school full-time, every day of the week. Not hybrid.”

The education secretary sat down with Spectrum News as Congress and the White House continued to work out the details of President Joe Biden’s sweeping domestic agenda, which includes historic education proposals such as universal pre-K and free community college.

Cardona called this week a critical one for students across the country, saying that the potential changes would impact “generations to come.”

“As a former building principal, I can tell which students have quality early childhood education and which ones did not,” he said. “Students who have thought college is out of reach will now have access to community college, so they could further their goals and their dreams.”

The final details of the administration’s agenda are still in the works, though President Biden canceled a planned trip to Chicago and stayed in Washington on Wednesday to push the $3.5 trillion proposal forward.

Even if passed, the pre-K and college elements of the legislation would require intense coordination with states, including getting them to opt-in, and efforts to address resources, such as the critical shortage of teachers created by the pandemic.

Sec. Cardona said there are aspects of the president’s agenda for that, too, especially to boost fields like special education.

“There are funds allocated to help create pipeline programs so that our students with disabilities … have access to high quality teachers,” he said. “There's also a pipeline program for educators that want to move on and get additional degrees. It's really about elevating the profession.”

“Our educators have worked really hard over the last 18 months,” he added. “This agenda really gives them the support that they need.”

NOTE: This article has been updated to reflect a statement from a spokesperson for Florida Gov. Ron DeSantis.