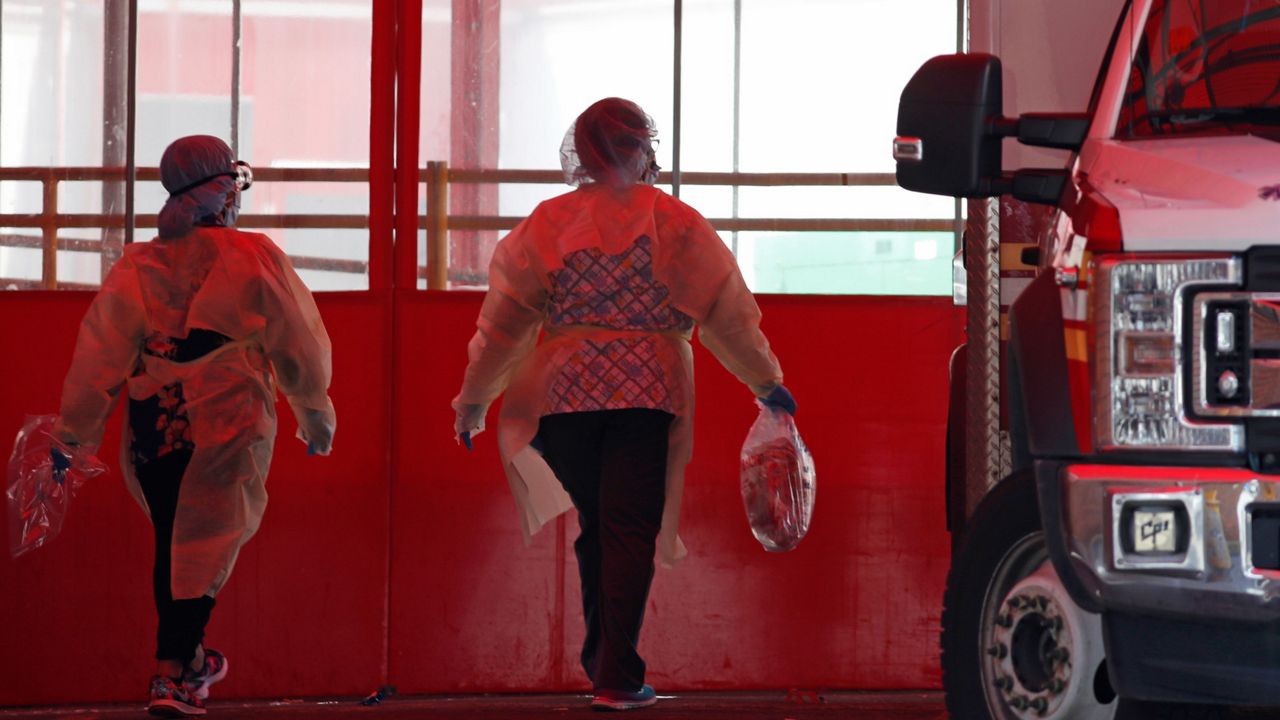 It's been a year and a half since the coronavirus pandemic rocked the country’s public health infrastructure to its core, and while more robust than most, weaknesses in the city’s health system were also exposed. Though city officials remain hopeful after learning Wednesday that FEMA will now be reimbursing the city's hospitals for COVID-related costs.

During the first surge of the pandemic, the USNS Comfort was docked in the Hudson treating a few dozen patients. Similarly at the Billie Jean King Tennis Center in Queens, nurses reportedly sat idle. Workers at both facilities were waiting to offer emergency aid. Those additional resources went underused, experts say, because the city’s health care system is fragmented. Navigating logistics between existing public and private hospitals proved hard enough.

“I really wish that we could have worked more as a health care system as one and have kind of visibility and transparency into what resources and capacity is available. And [know] how do we kind of level load across not just one system, but the entire state or an entire city,” said Wei, who is also a senior vice president with NYC Health + Hospitals.

City-run hospitals were swamped with patients while some independent hospitals had room to spare. True collaboration takes planning, says Dr. Wafaa El-Sadr, chair of Global Health Epidemiology at Columbia’s Mailman School of Public Health. “You can't wait till you have a crisis and you try to do it. It's the kind of thing that you need to be doing during, what I call, peacetime,” said El-Sadr.

Wei says the pandemic blew open already existing cracks; people with poor health before the pandemic were the most vulnerable during it. “Those who have co-morbidities going into this pandemic, those who might have had good reason to not trust the health care system. And we're seeing a lot of that in our vaccine hesitancy as well. Those things kind of turned from cracks into valleys.”

The unbalanced burden of disease and vaccine reluctance seen among low income and Black and Brown communities across the country, is a consequence, said El-Sadr, of the gradual underfunding of the public health infrastructure. Too few people trained to do needed work.

“All the way from senior managers to epidemiologists, to data managers, to data analysts, to outreach workers and contact tracers and contact tracing supervisors. And so there's a whole spectrum of the public health workforce that just had not been built up in the past decades,” said El-Sadr.

Despite that, both public health experts said New York was in a better place to weather the storm than most of the country. Before the pandemic, NYC Health + Hospitals set up mental health support for staff, which Wei said became a vital resource offering therapy and rest to those who need it. “18 teams across the system for emotional and psychological support of our staff because this was unprecedented trauma.”

City hospitals had also recently finished upgrading the electronic health records system in 2019, seamlessly connecting all 11 city-run hospitals. “I can't imagine us going through this pandemic without being on the same HER,” said Wei. He hopes moving forward, the city continues to invest in data and analytics that can be used to share more of the burden across all hospitals- public and private.

But keeping momentum to fund public health is already proving difficult. While millions in federal dollars have helped to build up an army of contact tracers and fund the extra hours and additional staff needed, the city’s budget for the next fiscal year reveals funding cuts to the hospital system’s Test + Trace program and the Department of Health’s Division of Disease Control. A city spokesperson says the funding was valid for fiscal year 2021 only.

Members of the State’s Washington delegation promise that $880 million in reimbursement funds for city hospitals is on the way. But FEMA offered no timeline on when health + Hospitals will get that money. A spokesperson for the agency said “FEMA continues to work with our partners in New York City to ensure applicants receive reimbursement for all eligible COVID expenses.”

How these programs are funded moving forward in the city will largely fall to the new mayor’s administration. El-Sadr, said better planning, public health education and preparation is needed now — to get through this pandemic and weather future ones. “You have to have people who will keep this kind of commitment alive between crises. And that requires having structures that are focused on this. And these entities or structures could then be the forum that brings these people together.”