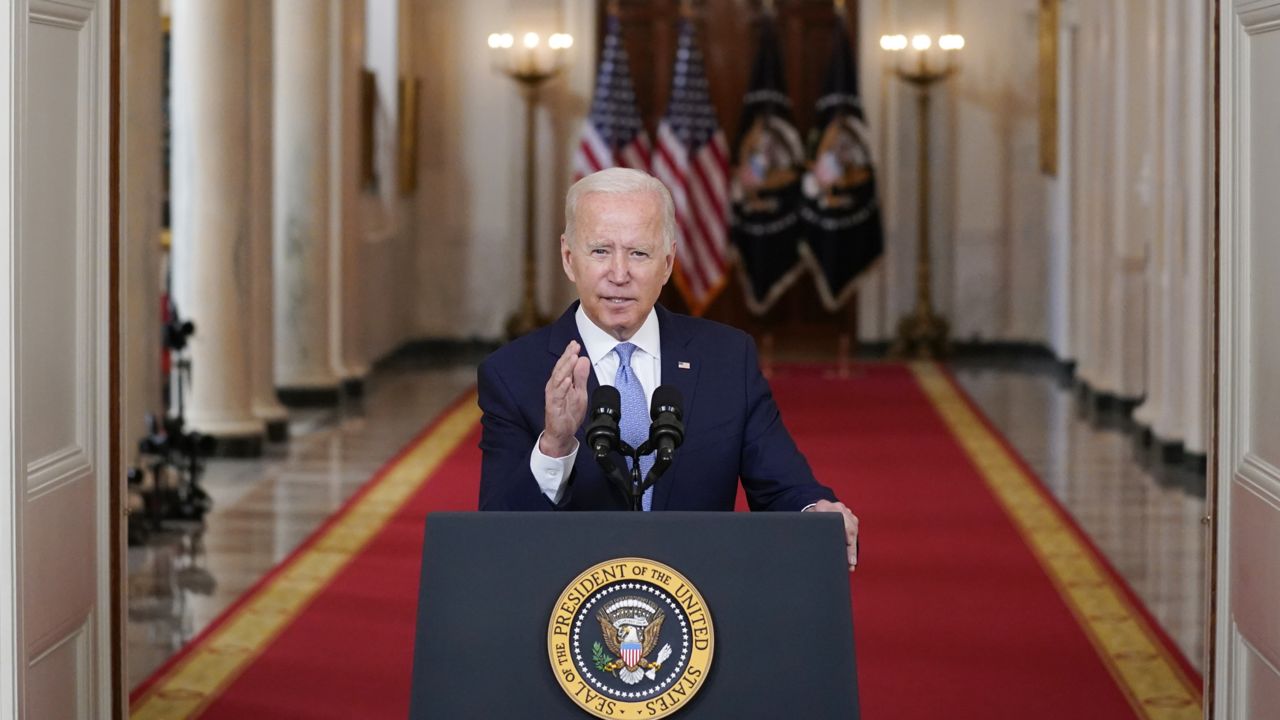 President Joe Biden speaks about the end of the war in Afghanistan from the State Dining Room of the White House, Tuesday, Aug. 31, 2021, in Washington. (AP Photo/Evan Vucci)

Biden defends Afghanistan withdrawal: ‘It was time to end this war’

"My fellow Americans, the war in Afghanistan is now over,” President Joe Biden said Tuesday, less than a day after the final U.S. troops left Afghanistan following two decades of conflict.

In a speech from the State Dining Room at the White House, the president delivered a fiery defense of his decision to pull U.S. troops out of Afghanistan while previewing a new era for America’s international military presence in the years to come.

“No country in history has done more to airlift out the residents of another country than we have done. We’ll continue to work to help more people leave the country who are at risk,” Biden said, adding: “We're far from done.”

As of Tuesday, between 100 to 200 Americans remain in Afghanistan. Biden said the majority are choosing to stay in the country because of familial ties or personal roots, and said there is no deadline for them to return stateside, as the U.S. remains “committed to get them out if they want to come out.”

On Monday, Secretary of state Antony Blinken said there were “under 200 and likely closer to 100” American citizens remaining in Afghanistan who wanted to leave, although the government was still in the process of determining a specific number.

The frenzied withdrawal from Afghanistan has drawn criticism from both Democrats and Republicans alike, with many questioning why U.S. citizens, troops and Afghan allies were not evacuated before the Taliban’s swift takeover of the country in mid-August.

Biden acknowledged the criticism Tuesday, but maintained the chaotic nature of the mission was unavoidable.

“Some say we should have started mass evacuation sooner. And, couldn't this have been done in a more orderly manner. I respectfully disagree,” Biden said. “The bottom line is, there is no evacuation from the end of a war run without the kinds of complexities and challenges and threats we faced. None.”

Biden placed blame, in part, on former Afghan President Ashraf Ghani, who pressed him to hold off on any urgent evacuation of Americans before Aug. 31, arguing that it would be inviting the Taliban to advance more quickly — as it turned out they did anyway — and telling the Afghan army to give up.

“That assumption that the Afghan government would be able to hold on for a period of time beyond military drawdown turned out not to be accurate,” Biden said. “But I still instructed our national security team to prepare for every eventuality, even that. And that's what we did.”

The president gave a number of answers for why he decided to withdraw all troops from Afghanistan, saying in part: “I was not going to extend a forever war. And I was not extending a forever exit.”

Biden also said the U.S. objective of stemming the post-9/11 terror threat in Afghanistan was completed a decade ago, adding he was not willing to continue spending billions of dollars on a conflict outside the national interests of the United States.

In Biden’s view, the war could have ended 10 years ago with the U.S. killing of Osama bin Laden, whose al-Qaida extremist network planned and executed the 9/11 plot from an Afghanistan sanctuary. Al-Qaida has been vastly diminished, preventing it (thus far) from again attacking the United States.

Biden went on to detail his vision for the future of America’s international engagements, saying human rights will be at the center of U.S. foreign policy going forward. But he also stressed that the United States will continue to hunt down all terrorists who pose a threat to national security, regardless of where the threat originates.

“For anyone gets the wrong idea, let me say clearly: Those who wish America harm, for those who engage in terrorism against us or our allies, know this,” he continued. “The United States will never rest. We will not forgive, we will not forget. We will hunt you down to the ends of the earth and you will pay the ultimate price.”

Biden also warned the terrorists behind last week’s attack that killed 13 U.S. troops: "To ISIS-K: We're not done with you yet."

“As commander-in-chief, I firmly believe the best path to guard our safety and our security lies in the tough, unforgiving, targeted, precise strategy that goes after terror where it is today, not where it was two decades ago,” Biden said, touting the U.S.’ “over-the-horizon” capability to carry out strikes.

Biden took time in his remarks to honor the "13 heroes [who] gave their lives" in the deadly attack at Kabul's airport last week.

"I was just at Dover Air Force Base for the dignified transfer," Biden said. "We owe them and their families a debt of gratitude we can never repay, but we should never, ever, ever forget."

Spectrum News' Austin Landis and The Associated Press contributed to this report.