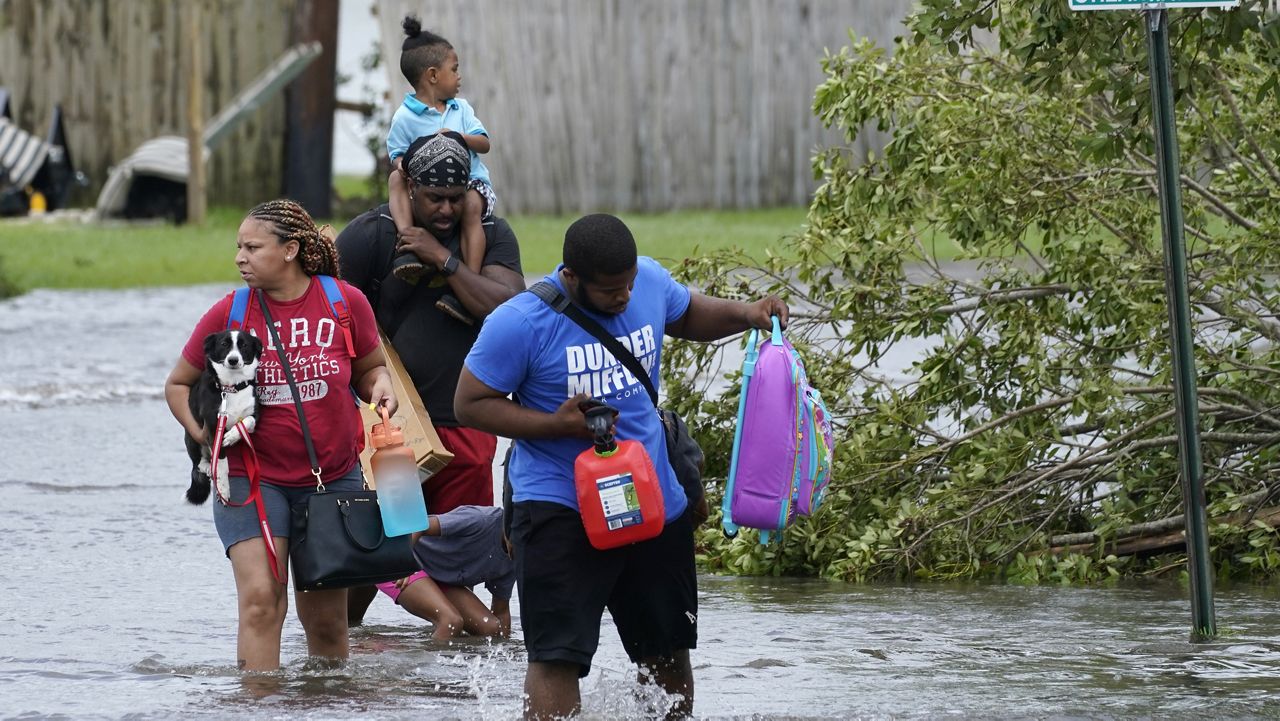 Michael Thomas, back, carries his daughter Mikala, out of his flooded neighborhood after Hurricane Ida moved through Monday, Aug. 30, 2021, in LaPlace, La. (AP Photo/Steve Helber)

Louisiana communities battered by Hurricane Ida faced a new danger as they began the massive task of clearing debris and repairing damage from the storm: the possibility of weeks without power in the stifling, late-summer heat.

Ida ravaged the region’s power grid, leaving the entire city of New Orleans and hundreds of thousands of other Louisiana residents in the dark with no clear timeline on when power would return. Some areas outside New Orleans also suffered major flooding and structural damage.

President Joe Biden met virtually on Monday with Edwards and Mississippi Gov. Tate Reeves along with mayors from cities and parishes most impacted by Hurricane Ida to receive an update on the storm’s impacts, and to discuss how the Federal Government can provide assistance.

“We are closely coordinating with state and local officials every step of the way,” Biden said.

Two people were killed and at least 10 others were injured after a roadway collapsed in Mississippi on Monday night. WDSU-TV reported that the Mississippi Highway Patrol, emergency personnel and rescue teams responded to Highway 26 in George County, about 60 miles northeast of Biloxi, to find both the east and westbound lanes collapsed, troopers confirmed.

Seven cars were involved and cranes will be needed to get the cars out of the hole, Cpl. Cal Robertson with the Mississippi Highway Patrol said.

Rescuers in boats, helicopters and high-water trucks brought hundreds of people trapped by floodwaters to safety Monday, and they planned to eventually go door to door in hard hit areas to make sure everyone got out OK. Power crews also rushed into the state.

The governor said 25,000 utility workers were on the ground in Louisiana to help restore electricity, with more on the way.

Still, his office described damage to the power grid as “catastrophic,” and power officials said it could be weeks before electricity is restored in some spots.

More than 1 million homes and businesses in Louisiana and Mississippi were left without power as Ida pushed through on Sunday with winds that reached 150 mph. The wind speed tied it for the fifth-strongest hurricane ever to hit the mainland. By late Monday, the storm had been downgraded to a tropical depression with winds of up to 35 mph, though forecasters still warned of heavy rain and a flood threat for parts of the Tennessee and Ohio valleys.

The storm was blamed for at least two deaths — a motorist who drowned in New Orleans and a person hit by a falling tree outside Baton Rouge.

The hurricane blew ashore on the 16th anniversary of Katrina, the 2005 storm that breached New Orleans’ levees, devastated the city and was blamed for 1,800 deaths.

This time, New Orleans escaped the catastrophic flooding some had feared. But city officials still urged people who evacuated to stay away for at least a couple of days because of the lack of power and fuel.

The U.S. Environmental Protection Agency issued emergency fuel waivers for Louisiana and Mississippi, effective immediately, on Monday night. It will end on Sept. 16.

Some places were also dealing with water problems. Eighteen water systems were out, impacting more than 312,000 people, and an additional 14 systems affecting another 329,000 people were under boil water advisories, Edwards said Monday.

The hurricane twisted and collapsed a giant tower that carries key transmission lines over the Mississippi River to the New Orleans area, causing widespread outages, Entergy and local authorities said. The power company said more than 2,000 miles of transmission lines were out of service, along with 216 substations. The tower had survived Katrina.

In Mississippi’s southwestern corner, entire neighborhoods were surrounded by floodwaters, and many roads were impassable. Several tornadoes were reported, including a suspected twister in Saraland, Alabama, that ripped part of the roof off a motel and flipped an 18-wheeler, injuring the driver, according to the National Weather Service.