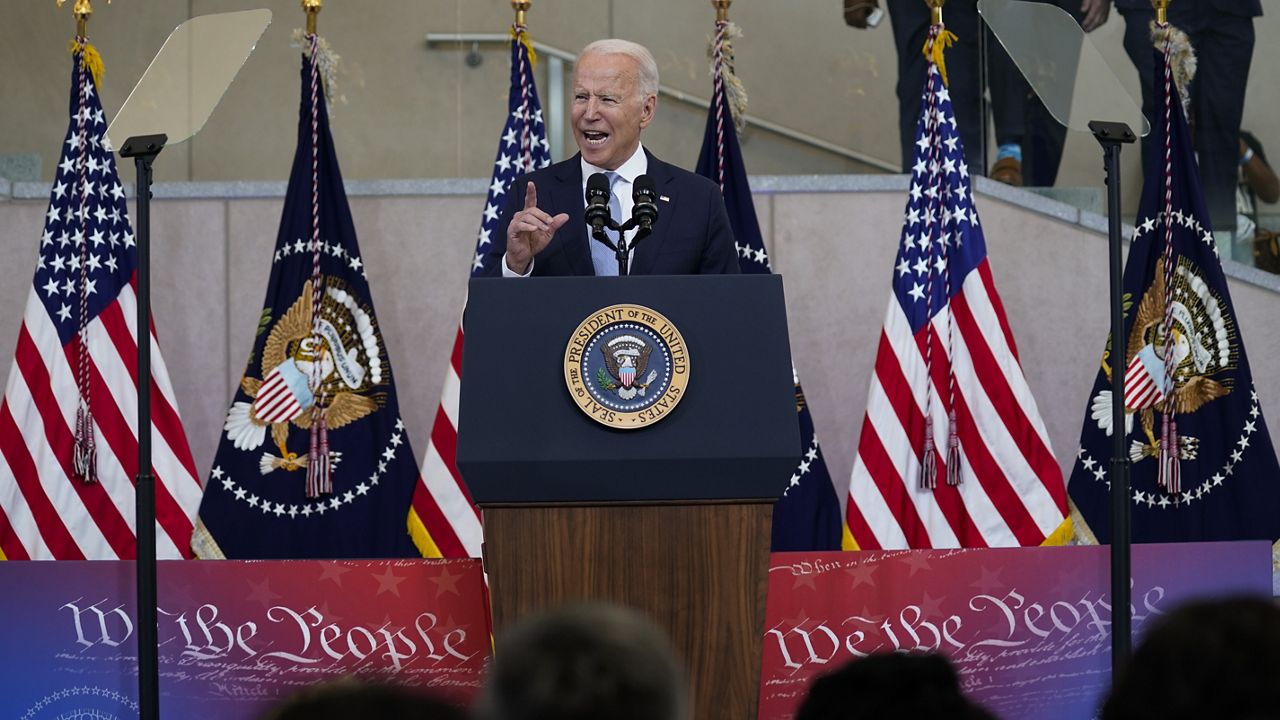 In Philadelphia, Biden calls battle over voting rights 'the test of our time'

At the National Constitution Center in Philadelphia, the city often referred to as the birthplace of America, President Joe Biden called the battle over voting rights in the United States "the test of our time."

In a powerful speech, Biden praised the fact that more Americans voted in 2020 than ever before, despite taking place "in the middle of a once-in-a-century pandemic."

The president also lauded the 2020 election, which he said was the most scrutinized in U.S. history, mentioning the numerous failed legal challenges about the results brought by allies of former President Donald Trump, as well as the recounts that took place in states nationwide – including Georgia, which had its results recounted three times.

"In America, if you lose, you accept the results," Biden said. "You follow the Constitution. You try again. You don't call facts fake and then try to bring down the American experiment just because you're unhappy."

He spoke while Texas state legislators met with officials in Washington, including Vice President Kamala Harris, one day after the group of Democrats fled their home state in order to break legisative quorum and block the passage of new voting restrictions.

"There’s an unfolding assault taking place in America today," Biden warned. "An attempt to suppress and subvert the right to vote in fair and free elections. An assault on democracy, an assault on liberty, an assault on who we are, who we are as Americans."

"They want make it so hard and inconvenient that they hope people don't vote at all," the president said. "That's what this is about."

"We'll be asking my Republican friends in Congress and states and cities and counties to stand up for God's sake and help prevent this concerted effort to undermine our elections and the sacred right to vote," Biden said, before posing the question: "Have you no shame?"

"Will you deny the will of the people?" Biden asked. "Will you ignore their voices? We have to ask: Are you on the side of truth or lies?"

"The 21st century Jim Crow assault is real, it's unrelenting," Biden said, before pledging: "We are going to challenge it vigorously."

The president referenced the deadly Jan. 6 riot at the U.S. Capitol by a mob of supporters of former President Donald Trump attempting to overturn the results of the election: "Democracy held, but look how close it came."

Biden said that the U.S. "is facing the most significant test to our democracy since the Civil War," but noted that "the Confederates never breached the Capitol," unlike the insurrectionists who on Jan. 6.

The president called on Congress to pass the For the People Act, which he called a "national imperative," and the John Lewis Voting Rights Advancement Act "to restore and expand voting protections and prevent voter suppression."

"As soon as Congress passes the For the People Act and the John Lewis Voting Rights Advancement Act, I will sign it and let the whole world see it," Biden pledged.

The For the People Act narrowly passed the House along party lines, but Senate Republicans blocked a procedural vote to debate the measure last month.

Biden slammed Republicans for not even debating the measure in the Senate: "We must pass the For the People Act. It's a national imperative."

Biden said that his administration will launch a nationwide campaign to provide voters information on restrictive voting measures and reule changes ahead of the 2022 midterm elections: "We have to prepare now."

Voting and civil rights advocates have called on the president to do more on the issue in recent weeks, as Democrats try to overcome GOP opposition to voting legislation on Capitol Hill. The president has promised to go “on the road” on the topic, but the White House hasn’t confirmed any travel after Tuesday.

And while the president on Tuesday called on Congress to act, the likelihood of passing voting legislation this year is dwindling.

The Texas lawmakers who left their home state Monday said they hope their protest will call attention to the need for change at the federal level.

Vice President Harris met with the delegation of Democratic legislators Tuesday, where she praised them for the “extraordinary courage and commitment," adding: “I applaud them standing for the rights of all Americans, and all Texans, to express their voice through their vote unencumbered.”

“I know what you have done comes with great sacrifice, both personal and political,” she added. “And you are doing this in support and in defense of some of our nation’s highest ideals."

Moderate Democrat Sen. Joe Manchin of West Virginia also agreed to meet with the delegation, his office confirmed to Spectrum News, though a firm date for the meeting has not been set.

The group spoke outside the U.S. Capitol earlier in the day.

The group said they plan to remain outside of Texas for another 25 days, until the special legislative session called by Governor Greg Abbott ends, in theory giving time for a federal bill to pass.

In order to get federal legislation through Congress, Democratic Rep. James Clyburn of South Carolina told Politico that he would like to see Biden endorse the idea of changing the Senate filibuster — which requires 60 votes — just to pass the voting rights bill.

"I’m not filibustering now," Biden told reporters in response to questions about the filibuster after the speech Tuesday.

"President Biden wouldn't need to come to Philadelphia today and give a speech on voting rights if Democrats in D.C. started to vote like actual Democrats," Pennsylvania's Lieutenant Gov. John Fetterman, who is running for U.S. Senate in 2022, said Tuesday. "It is time for the Senate to abolish the filibuster and pass the For the People Act."

Last week, President Biden Vice President Kamala Harris met with voting and civil rights advocates at the White House, including leaders from the NAACP and Rev. Al Sharpton. Sharpton pledged to pursue a “summer of activism” and continue pressing forward on the issue, calling the meeting positive but lacking in concrete promises.

Senate Majority Leader Chuck Schumer, D-N.Y., said that "everything is on the table" in order to get election reform bills through the chamber, but declined to say whether or not he wants to eliminate the filibuster.

Leader Schumer also met with the Texas Democratic legislators Tuesday, telling reporters after the meeting that “these folks are going to be remembered on the right side of history.”

On Tuesday, Biden also spoke about the efforts from the Department of Justice to protect the right to vote, such as the recent lawsuit filed against Georgia. Biden called the Georgia voting law "vicious" and "racially discriminatory."

The president noted that he asked the DOJ to double the size of its voting rights division in order to dismantle race discriminatory laws.

The president has tapped Vice President Harris to take the lead on voting rights, and she hosted a listening session on the topic in Detroit Monday.

Today, I spoke with activists about how we can defend and strengthen voting rights in Michigan and across the country. Our vote is our power—and we can’t let anyone take it away. pic.twitter.com/wDOYEfKgIM

"We the people will never give up," Biden promised. "We will not give in. We will overcome. We will do it together."

The president closed by quoting the late congressman John Lewis: "Freedom is not a state. It’s an act."

"And we must act," Biden said. "And we will act. For our cause is just. Our vision is clear. And our hearts are full."

"For 'We the People,' for our democracy, for America itself, we must act," the president pledged.