NEW YORK — A top aide to Scott Stringer is raising questions about the woman who is accusing the mayoral candidate of sexual assault, pointing to the fact that she filed petitions to help rival Andrew Yang get on the ballot.

Jean Kim, the woman who spoke out forcefully about Stringer this week, filed ballot petitions on behalf of the Yang campaign, according to records provided to NY1 by the Stringer campaign and independently corroborated by the city’s Board of Elections.

In a statement, a spokesperson for Stringer says the petition raises questions about Kim’s motivations – and the veracity of her attorney, Patricia Pastor.

"Ms. Kim worked for Eliot Spitzer in 2013 and now we learn that she was working for Andrew Yang this year," said Tryone Stevens, the Stringer spokesperson. "There is a pattern here of inaccurate statements made by Ms. Kim's attorney."

Kim issued her own statement Friday morning denying any political connections to her charges.

“I do not work and have never worked for the Andrew Yang campaign," Kim said. "I’ve never met him, and I have not decided who my choice is for mayor of New York City.”

Alyssa Cass, a spokesperson for Yang's campaign, said the campaign was not aware of Kim carrying petitions on its behalf.

"This is the first we've heard that she carried a handful of petitions for candidates including Andrew. We support Jean Kim and commend the courageous step she took sharing her story," Cass said.

Candidates running for public office must collect a minimum number of signatures in order to get on the ballot. Campaigns usually rely on a network of volunteers or paid campaign workers to collect signatures ahead of the required deadline. Once the ballots are submitted to the Board of Elections, signatures and petitioners' information is vetted before the board can make a determination and place a candidate on the ballot.

Copies of the petitions, which were reviewed by NY1, show Jean Kim is listed as a "witness" — a designation given to the person who is carrying the petition at the time. 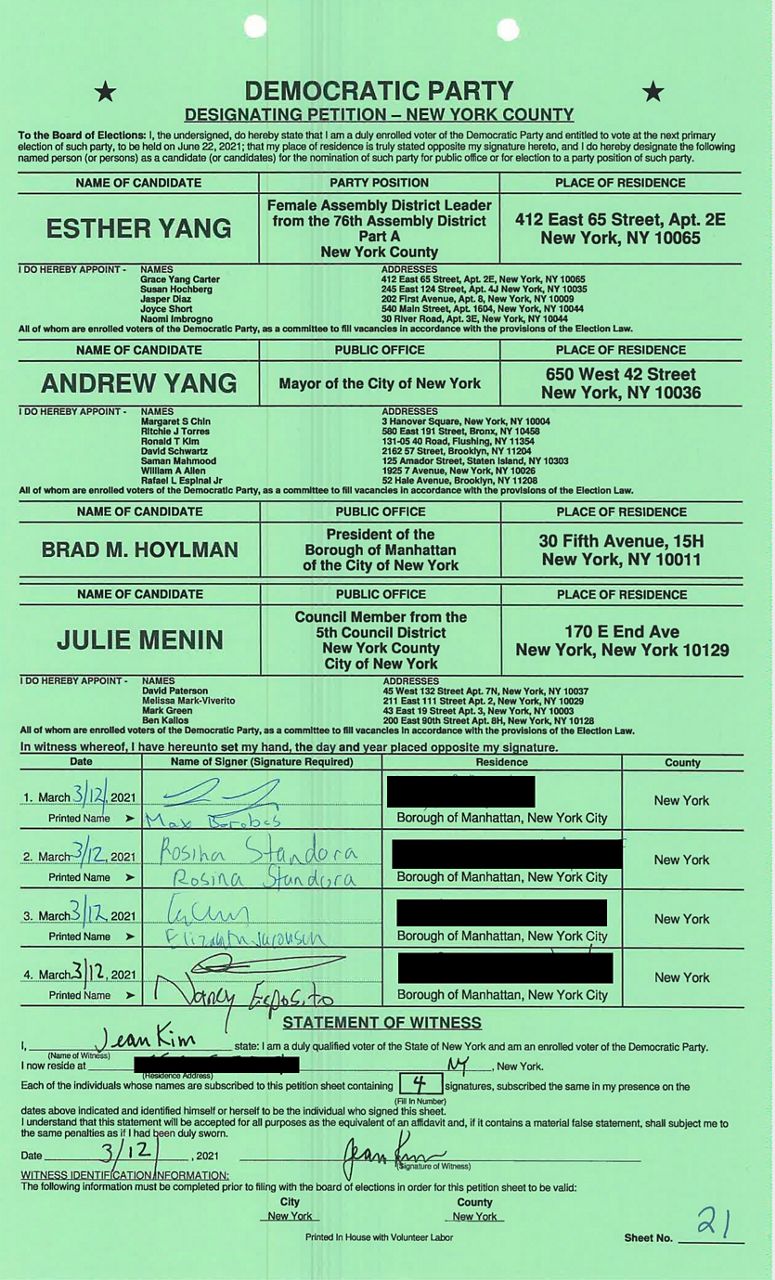 Board of Elections petition sheet with signatures gathered by Jean Kim.

In her statement, Kim said her petitioning work was for another candidate whose name was also on the petition, Esther Yang, who’s not related to Andrew Yang.

“I have collected ballot signatures for multiple political candidates in different races. And while I am focused on new and very different career options at this time, I am still quite active in my community,’’ Kim said.

Esther Yang is running for a Democratic District Leader position on the Upper East Side, where Kim resides.

Other candidates listed on the petition include Brad Hoylman and Julie Menin who are running for Manhattan borough president and City Council, respectively.

"She did not carry petitions for the Yang campaign," Pastor told NY1.

According to Pastor, Kim and Esther Yang are "neighbors and good friends." In March, she said Kim was petitioning on her friend's behalf.

"As far as carrying petitions, she is a community activist kind of person, she has carried petitions for many people," Pastor said.

A review of Esther Yang’s social media shows she has been campaigning on behalf of Andrew Yang. She appears in photos with Andrew Yang at the Board of Elections with stacks of petitions. In another post, she also appears with Jean Kim while holding Andrew Yang campaign literature.

Kim's name and signature appears on at least 14 ballot petition forms from March of this — just weeks before the deadline to submit the paperwork.

She became one of the central issues in the race for mayor this week after publicly detailing her allegations against Stringer on Wednesday.

Kim said she met Stringer while volunteering on his 2001 campaign for public advocate. During that time, Kim says Stringer "inappropriately and relentlessly" pursued a sexual relationship with her.

Stringer has denied the allegations, saying he and Kim had a brief consensual relationship and that she was a donor and supporter of his campaign. Stringer also said Kim applied for a job on his 2013 campaign for city comptroller. When she was rejected from that position, he said she went to work for Stringer's then opponent, Eliot Spitzer.

"Ms. Kim's attorney was asked if Ms. Kim worked for any other campaigns against Scott Stringer. The attorney's response was false," Stevens, Stringer's spokesperson said in his statement.

"My purpose is to speak the truth and for Stringer to be held accountable for his actions," Kim responded. "I am not surprised at all by his efforts to discredit me.  It is exactly what I expected him to do. Lie, attack and retaliate.”