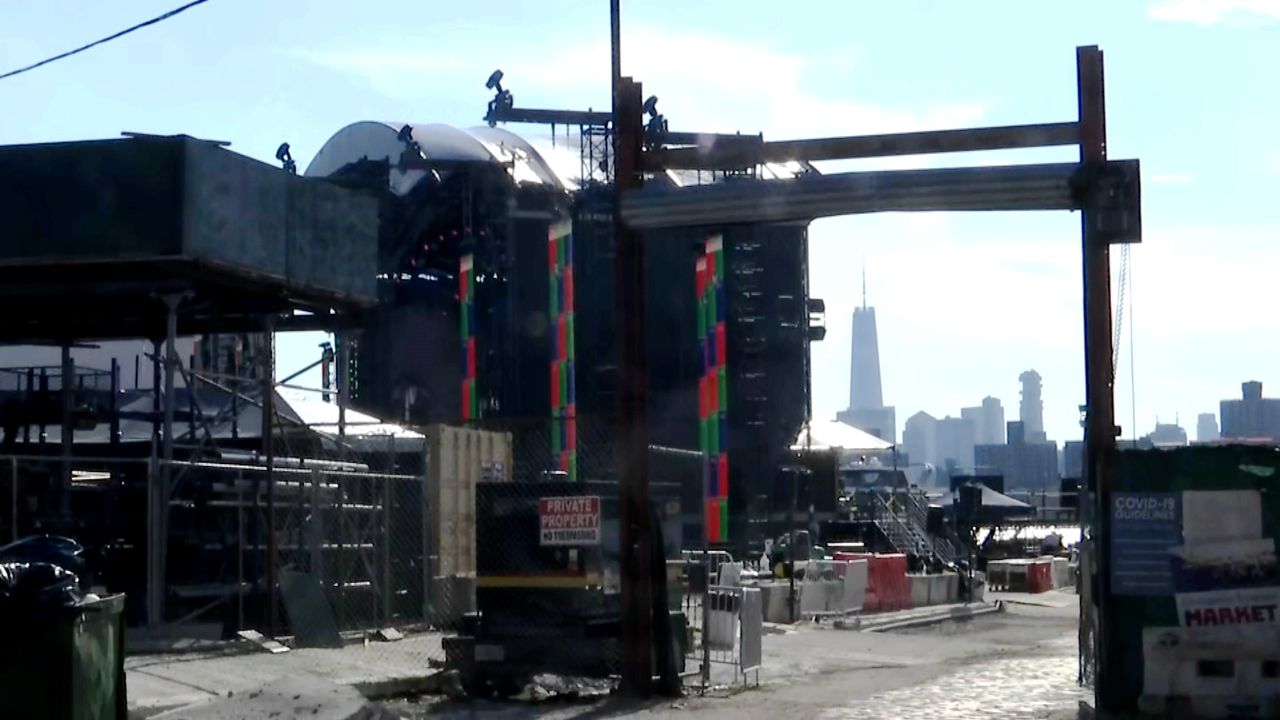 BROOKLYN, N.Y. - What was supposed to be one of several secret locations where performers will participate in the 2020 MTV Video Music Awards has been revealed.

Staff working at the site confirmed to NY1, unofficially, that they were working on a stage for MTV’s Video Music Awards scheduled to air live Sunday, August 30 from “multiple outdoor locations” across New York City.

The stage is being set up along the waterfront in Greenpoint, Brooklyn, just off West Street, but according to employees it, “would not be open to the public.”

NY1 watched about two dozen contractors, security guards and other employees, all wearing access badges, as they checked in at a red tent before going behind a large fence to where the stage was being built.

At the tent, workers were being checked in and NY1 was informed that part of the process for gaining access to the work site was daily coronavirus testing.

In an MTV press release issued earlier this summer, the network said it was taking all the necessary precautions to ensure production of the VMA’s would be done safely.

“Among the measures, all parties involved have aligned to include extensive social distancing procedures, meaningful capacity limitations, the virtualization of components where possible, and limited capacity or no audience,” the release said.

While staffers said the site was supposed to be a secret, the size of the stage and the sound checks made it impossible to ignore for locals.

“It’s nice to see something like that happening and they are trying to do this,” said one man, who works at a photography studio nearby. “As long as there are no problems, considering what is going on...hopefully they are using all the precautions.”

Originally, the hope was that the event would be held at Barclay’s Center, but later the venue and MTV announced they’d be taking the show to locations “spanning all five boroughs.”

At the location in Brooklyn, the project has brought in dozens of workers.

Some identified themselves, off camera, as being from NYC, while others said that they came from another state.

According to one business owner, the workers are in turn patronizing his business.

“It’s been getting busy with them...After work they come here and enjoy drinks,” said the owner of West Wine Bar.

It’s unclear which performer will be using the stage in Greenpoint.

According to MTV, Lady Gaga and Ariana Grande are set to perform, as are BTS, The Weeknd, Miley Cyrus, Doja Cat and Black Eyed Peas.

In light of the pandemic, MTV has made several other changes this year, including the introduction of two new categories, including Best Music Video from home and Best Quarantine Performance.

Keke Palmer will host the show, though it is unclear where she will be while hosting the event.

The coronavirus protocols intended to prevent transmission of the virus leading up to and during the VMA’s won’t be the same for celebrities participating in the event.

Reports indicate that despite the state’s mandatory 14 day quarantine for many out of state travelers, MTV obtained special exceptions for the performers, from the NYS Department of Heath, so that they could come in for the show.

That news didn’t sit well with some young New York City residents who spoke with NY1.

“I feel like things like this aren't necessary. You know what i mean?” said one young man of the VMA’s as a whole.

“I feel like if they haven’t been quarantining then its kinda selfish,” said one young woman of the exceptions being made for celebrity performers.

Officials with the NYC Mayor’s Office and MTV did not return NY1’s requests for additional information on its outdoor venues for the 2020 Video Music Awards.