Protesters chant as they march after a Juneteenth rally at the Brooklyn Museum on June 19, 2020. John Minchillo/AP.

Juneteenth to Be an Official NYC Holiday as Protesters Remember the Past, Fight for the Future

NEW YORK - As thousands of New Yorkers participated in protests, marches, and celebrations to mark Juneteenth on Friday, Mayor Bill de Blasio said it will become an official city and school holiday next year.

Juneteenth is the day in 1865 when enslaved people in Galveston, Texas, learned they were free, marking the official end of slavery in the U.S., about two and a half years after the Emancipation Proclamation and two months after the Civil War had ended. Word had not yet reached Texas, the most remote of the Confederate states.

This year's Juneteenth events take on extra significance in light of the death of George Floyd and the protests that followed in the city and across the nation. Friday marked the 23rd straight day of protests in New York City.

Thousands had gathered in Central Park and Columbus Circle after marching from Harlem.

There were a few tense moments as some protesters began taunting police, but march organizers quickly put a stop to that, telling them confrontation was not productive.

As the demonstration came to an end, one organizer reflected on the changes in the way police handled the crowds.

“Earlier on it was much more confrontational,” she said, “because the crowds were smaller and more spread out. But when there were thousand supporting us, it was harder to use the methods they were using. Kettling, tear gas and mace didn’t work.”

It was also a time to look back at how the protests, which started as a way of mourning the death of Floyd at the hands of Minneapolis police, to something much wider in scope.

“We wanted to stop seeing black bodies in the streets,” she said. “But when you do more research into the lives of black people, the more you realize it bleeds into everything. For now, we want to see the end of black killings, but for the future we want to see a complete revitalization of black lives, a place where we can truly thrive.”

Another group of protesters rallied in Grand Army Plaza, then picked up more marchers at Barclays Center before heading for Fort Greene Park, where the night took on a more festive feel.

One protester told NY1’s Ruschell Boone that, as a white woman, she felt it was important for her to join in.

“I love the phrase ‘white silence is violence,’” she said. “If we have the voice, we should use it.  I’ve seen so many times the repercussions and the effects on health care and education. It makes me really personally upset. Even though it’s not affecting me, that shouldn’t matter; it’s affecting somebody else, and that should be enough for change.”

Another protester said she intended to keep working for change even after the demonstrations end.

“I think a big part of what we have to do is have these uncomfortable conversations,” she said. “Call out your family, call out your friends if they say something. Sometimes it doesn’t come out of a place of hatred or contempt. It’s just not recognizing our embarrassing history.”

Amid protests, there were festive Juneteenth celebrations in the city.

Cherish Patton, 18, and Jaleh Williams, 20, organized one such celebration in Harlem’s Marcus Garvey Park. They told NY1’s Michael Herzenberg this date, personal to them, needs to be acknowledged.

“Juneteenth is a day that should have been acknowledged from the time it was birthed in 1865,” Patton said. “It is the day that slaves were told two and a half years after the Emancipation Proclamation was signed that they had their freedom.”

“The energy that we are creating is bigger than us. It’s a spiritual energy. It’s our awakening that’s happening,” Williams added. “It could be categorized or labeled as underground, but it’s something our people have been trying to get together for years to be educated and to educate ourselves and our families who don’t understand, who haven’t been taught. And they’re black.”

But both organizers stressed it was not a protest.

“This is definitely not about our movement,” Patton said. “Today is to honor those who survived and endured so we could live. So today we give it up and we say thank you to all our ancestors, all 12 million of them who were enslaved and taken from Africa to the Western Hemisphere, whose legacy didn’t get to continue because they chose freedom over enslavement.”

“Today we have paused the revolution to give honor to those who came before us” — Cherish Patton, an organizer of a gathering in Marcus Garvey Park to commemorate Juneteenth. https://t.co/8ck7RjuD7a pic.twitter.com/xLUl0a7nau

Still, protesters are out in force. Around 6 p.m. thousands were marching over the Brooklyn Bridge. They started at Grand Army Plaza and are heading for City Hall in Manhattan.

Earlier in Brooklyn, motorists gathered in front of the Brooklyn Public Library in what they called a “Ride for Justice,” driving past Grand Army Plaza and City Hall in Manhattan before heading for the Bronx and Queensboro Plaza. 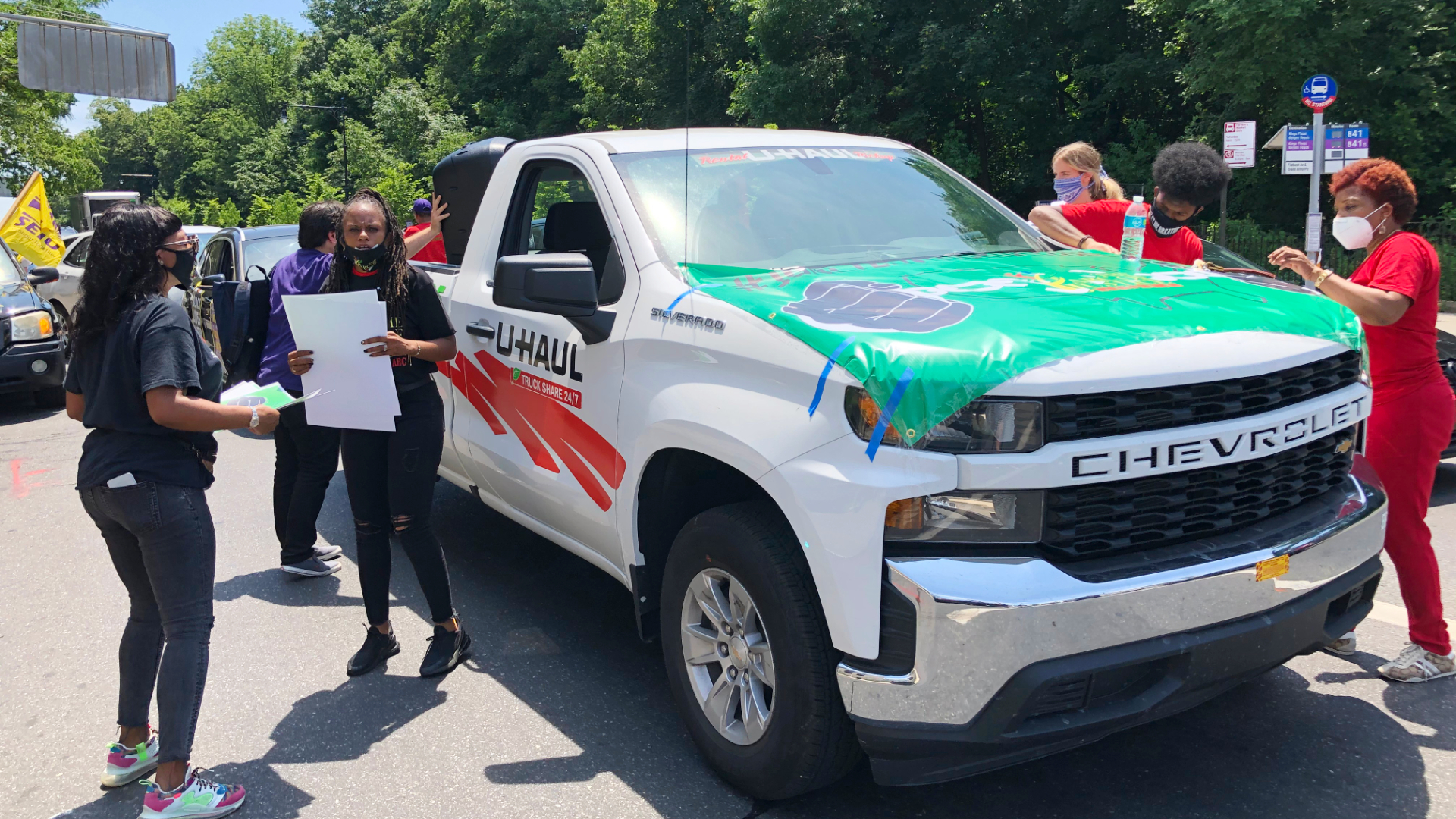 This was part of a larger “Drive for Justice” event happening in 30 cities to mark Juneteenth.

NY1’s Ron Lee spoke with Public Advocate Jumaane Williams and Assemblywoman Alicia Hyndman about the importance of making this day a city and state holiday.

“There’s a heightened sense of police misconduct,” Hyndman said. “There’s a heightened sense of making sure we rectify wrongs in the past, and the only way to do that is by acknowledging slavery and acknowledging racism and one of the reasons we’re in the situation we’re in today is because we have not really acknowledged it, and I think one way we can do it is by celebrating this day.”

“The mayor, unfortunately, always seems to be a little behind on this,” said Williams, a frequent critic of the mayor, “So it’s good the government did this by executive order. I closed my office and I think that’s what should be happening across the city. There’s no reason why the mayor couldn’t have done it today. Why does he always have to wait? I don’t understand.”

Earlier Friday, about 150 protesters also gathered in Washington Square Park, then made their way to Foley Square and, finally, the NYPD headquarters at One Police Plaza, where they stopped to take a knee.

One of the protest organizers, Gabriel Dennis, told NY1’s Rocco Vertuccio people marched because they were fed up, and that reforms already being made to policing in the city are far from enough.

“It’s something they’re doing to appease us,” he said. “At the end of the day this is a discussion on the status quo. What’s up with the police? Why are police records sealed when you have a history of excessive force? Until we get the proper change we’re gonna have to continue.”

Dennis says this fight has been going on for too long, but now he sees something changing.

“We were asking in the ‘60s. We were protesting in the ‘70s, and in the ‘80s it died down. We resurfaced in the ‘90s and now people are tired. But there’s a new generation. The only way it’s gonna change is by putting boots on the ground, and that’s what we did,” Dennis said.

One thing all the protesters seemed to agree on: the marches will go on until they get the changes they want.​

Meanwhile, during his daily briefing Friday, the mayor and First Lady Chirlane McCray also announced the formation of a new commission: the Racial Justice and Reconciliation Commission.

“Racism has been a pervasive and consequential force throughout the city’s history and we cannot go back to the status quo,” de Blasio said. "We must use the past to inform and inspire the present, to promote the dignity and well-being of all New Yorkers, and their full inclusion in the life of our city.”

The exact role and power of this commission is a bit unclear. McCray said it would identify where racism exists in city history.

NY1 asked City Hall for a list of members and was told the city is in the process of identifying the chair and membership.

Officials did say the commission will work over the next year to create a historical record of racial discrimination for the five boroughs. It will also provide a platform for New Yorkers to share their personal experiences with racism and discrimination.

The commission was clearly inspired by the groundswell of support for the Black Lives Matter movement seen in massive protests across the city earlier this month. To “commemorate” that movement, the city will be painting five additional Black Lives Matter murals on streets — one in each borough.

The streets getting the murals are Centre Street in Manhattan, Richmond Terrace on Staten Island, Joralemon Street in Brooklyn, 153rd Street in Queens, and Morris Avenue in the Bronx.

Painting #BLM. In the #NYC borough where #EricGarner died in 2014 after being placed in a chokehold by an #NYPD officer, a huge #BlackLivesMatter mural is being painted on several blocks. Artists, elected official & community activists are on #StatenIsland for the event. @NY1 pic.twitter.com/Hx1wDozxhi

At each end, yellow blocks are filled with the names of black people who have been killed by police.

Staten Island Councilwoman Debi Rose said the location of the borough’s mural, Richmond Terrace, is designed to make people take notice, whether they live on Staten Island or just come to visit.

The parks department also announced it is renaming parks across the five boroughs in an effort to honor African American history. The first park to be renamed is Cadman Plaza in Brooklyn, now known as Juneteenth Grove. 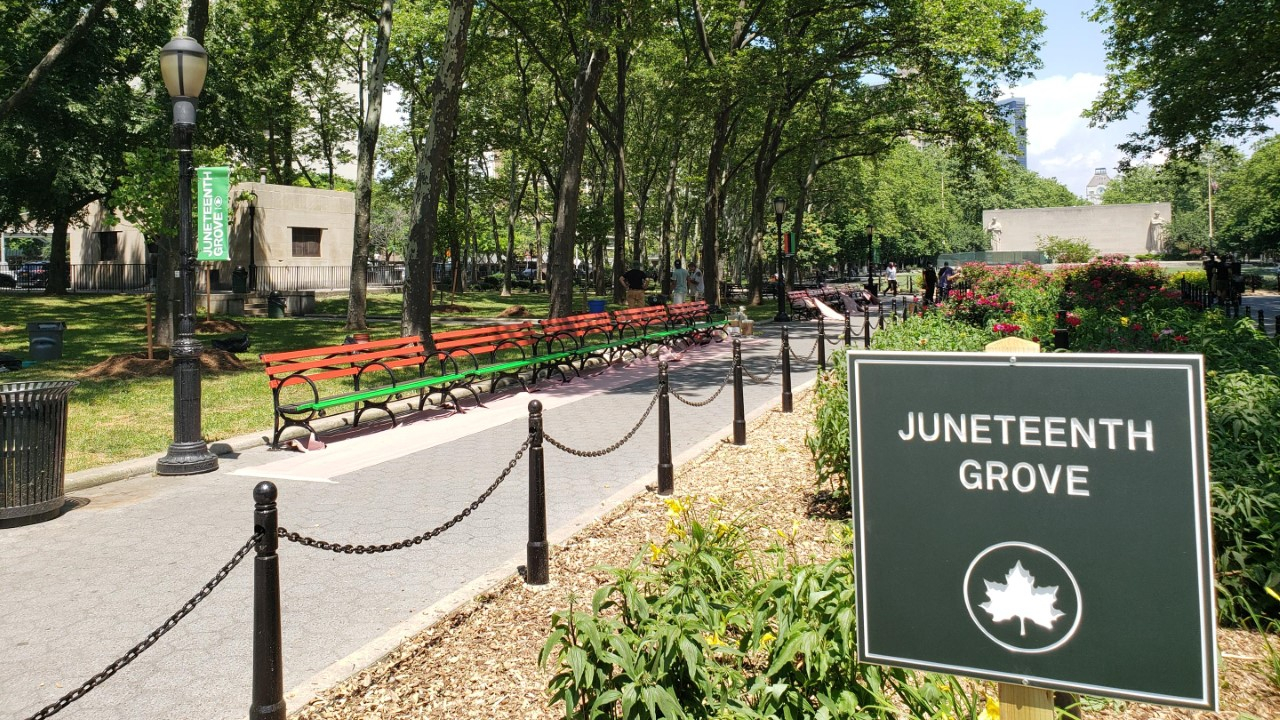