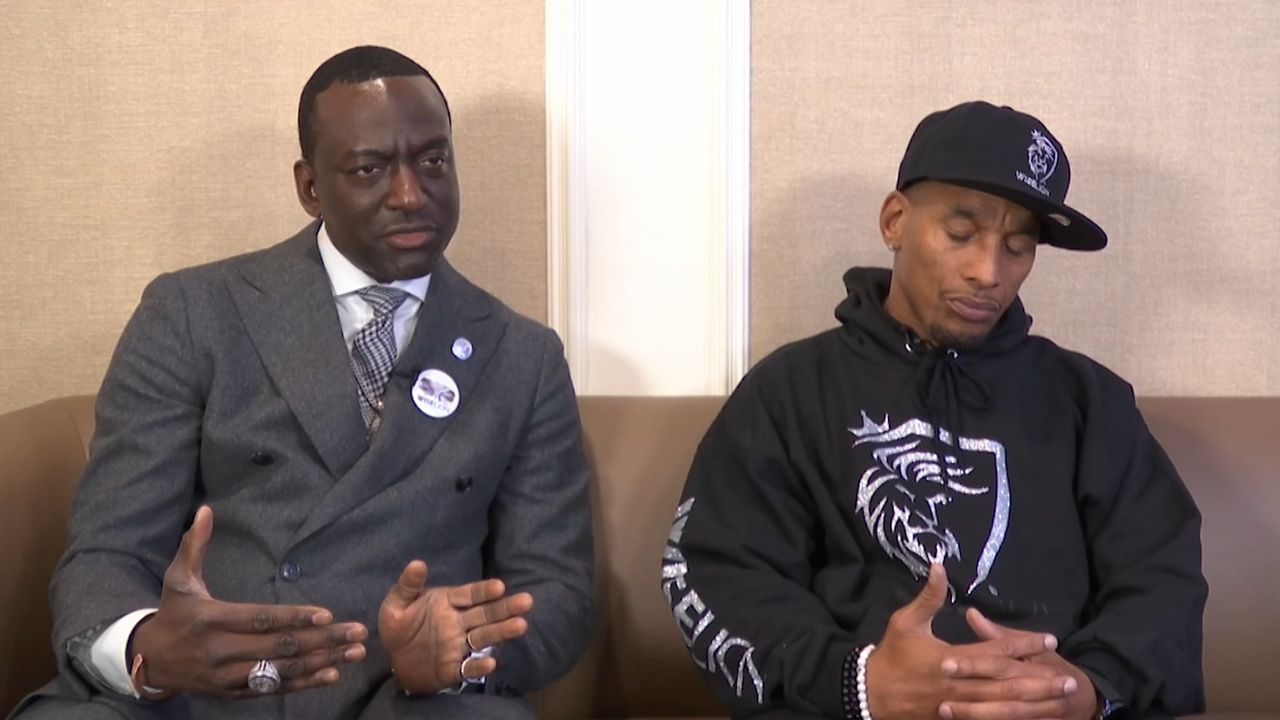 Yusef Salaam, left, and Korey Wise, two members of "The Central Park Five" in an interview with NY1 in Queens in October 2019.

A heart-wrenching scene from the Netflix series "When They See Us" dramatizes the unspeakable abuse that Korey Wise suffered as a teenager when he was sent to prison for a crime that he did not commit.

The performance so powerful that actor Jharrel Jerome walked away with his first major award, an Emmy.

"Most importantly, this is for the men that we know as 'The Exonerated Five,'" Jerome said at the awards ceremony.

"Forever blessed for him embodying me like that," Wise said. "Took my life on an…emotional rollercoaster ride. It was too heavy. It was heavy."

Heavy because Wise got the longest prison sentence and was separated from the others four teens, all convicted of raping "The Central Park Jogger."

"I don't know if I've ever told Korey this: I've had people, through social media, be very angry at me," said Yusef Salaam, another member of the "Central Park Five." "Just be in my DMs, like, "I hate you" and just say that over and over and over and over again."

"Because they look at it from the perspective of saying," Salaam continued. "'Korey would not have gone through this had you not knocked on the glass and said, 'Hey, come one, we're going to the park.'' And that part I had to deal with."

"The Exonerated Five" have also been dealing with international stardom. They were all smiles at the glitzy BET Awards, but behind those smiles is the pain of a lost childhood.

"We had to relieve the trauma," Salaam told me. "So in a very short timeframe, we had to go back 30 years in trauma to regroup and to understand…why we are here at this moment — what this brotherhood was really all about and is all about."

Even President Donald Trump was pulled into the national conversation about "The Central Park Five." There were calls for him to apologize because he took out a full-page ad calling for the teens' execution in 1989. To this day, the president refuses to apologize:

Years after DNA evidence exonerated the Central Park 5, @RealDonaldTrump declined to apologize for taking out a full-page ad in a newspaper that called for them to be executed. The president received the question Tuesday before heading to a campaign rally in Orlando. #NY1Politics pic.twitter.com/dL3TvUJE5j


"The worst thing is that was two weeks after we were accused. You're talking about 14-, 15- and 16-year-old children," Salaam said. "You've already vilified them, you've already cast your judgment against them. They haven't gone to trial yet."

Trump was not alone. "The Central Park Five" had only a handful of supporters during their highly publicized trial. 30 years later, fans line up for selfies and autographs. The irony is not lost on Wise.

"That took y'all so long? Now you're…surprised?"

In the years since their release from prison, all have moved out of New York except Wise. The criminal justice reform activist is with Rev. Al Sharpton every Saturday morning at the House of Justice in Harlem. He's also an entrepreneur with his own fashion line, Wise Lion Apparel.

Salaam now travels the world as an activist and motivational speaker, along with Raymond Santana, Antron McCray, and Kevin Richardson, the other members of "The Exonerated Five."

Richardson, who was just 14 when he was wrongfully convicted, had dreams of attending Syracuse University. Last month, the school welcomed him to the campus and named a scholarship in his honor.