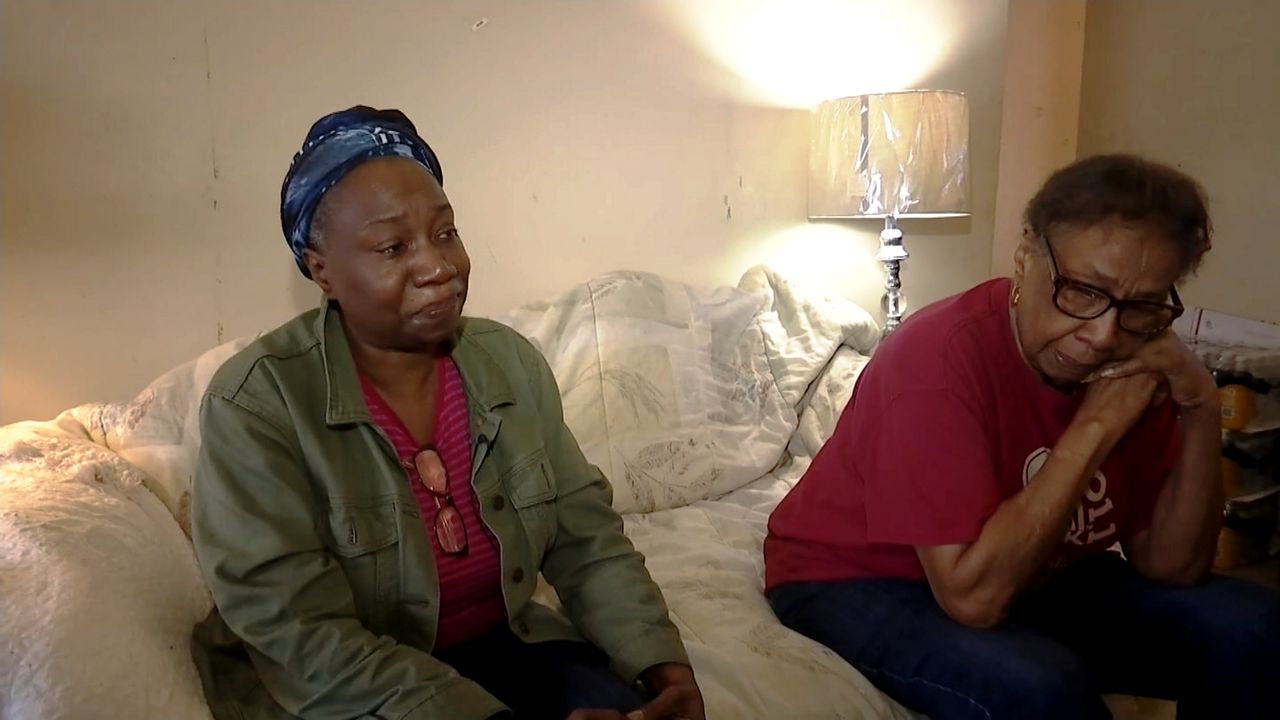 NEW YORK - The star studded movie “Motherless Brooklyn” closes out the New York Film Festival Friday more than 18 months after the fire on the set that claimed the life of FDNY Lieutenant Michael Davidson.

Since then, nearly a half a dozen lawsuits have been filed against Ed Norton’s production company, the landlord of the building and/or the city. 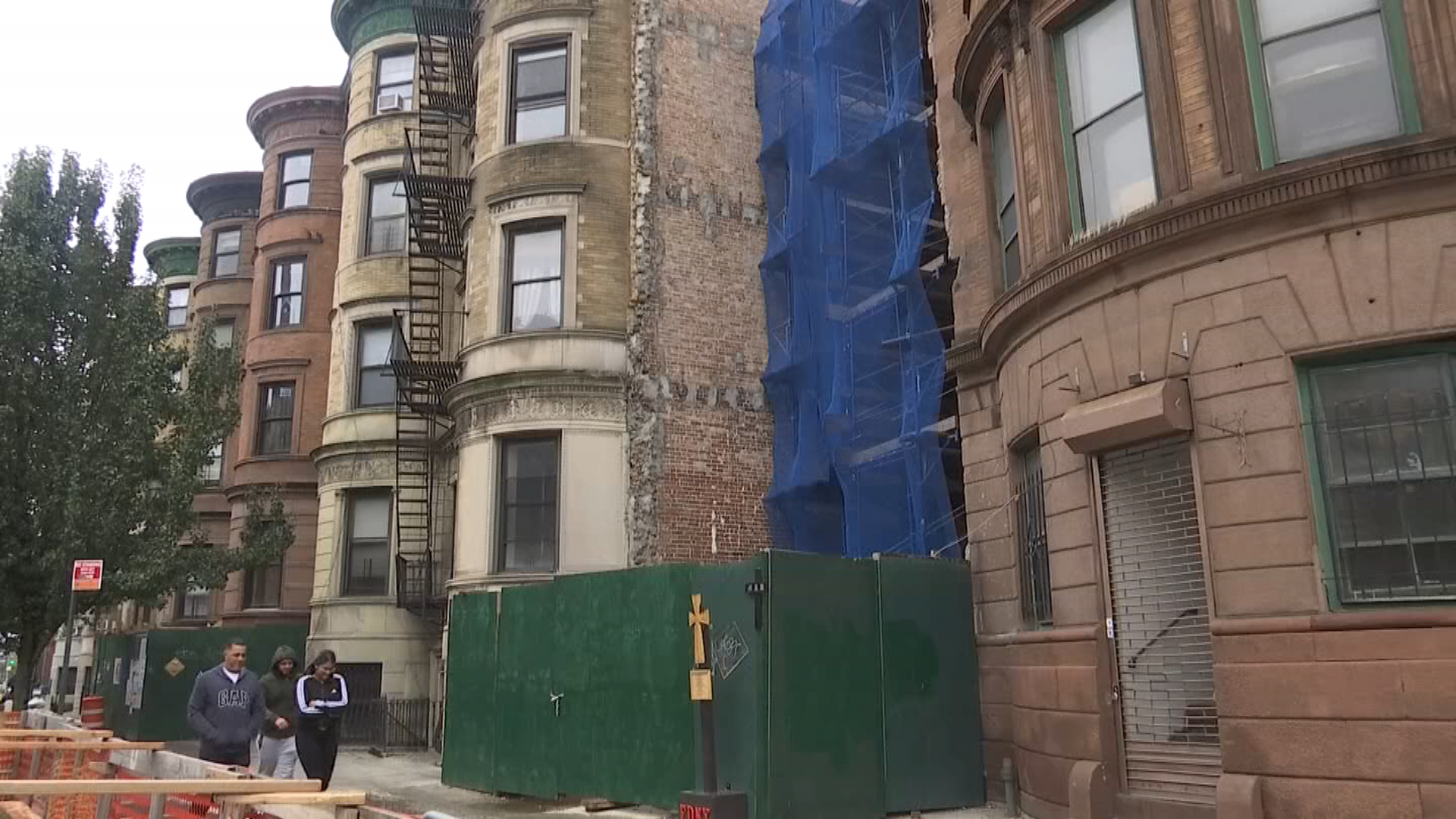 (Above: A vacant lot where the Harlem residential building once stood)

Meanwhile, the city has not implemented a simple safety measure that experts say could prevent fires like this in the future — all this while some people are still displaced and struggling.

"He’s 94 and I’m 85," Doris Adams said about herself and her husband, “We both have lived a full life, but still those few years I figured if we could."

Adams’s volume tapered off, talking about the future. She wants to go back home to her Harlem apartment with her husband. They moved to her daughter’s Bronx apartment after a week’s stay in the hospital from the fire that consumed the building next door to hers.

"I didn’t think it was a fire, I just thought it was something going on with the movie," Adams said.

The movie, “Motherless Brooklyn”, written and directed and starring Ed Norton, with Bruce Willis, Alec Baldwin and Willem Defoe, was finishing up a shoot next door on Saint Nicholas Avenue when the fire broke out in the basement.

It was March 22, 2018. Adams was getting ready for bed, still in her pajamas when a neighbor alerted her about the fire. She grabbed her coat and made her way towards the staircase.

"And I fell at the top of the steps and I couldn’t move," Adams recalled.

First responders and a neighbor carried her out and saved her life.

The smoke also overwhelmed Fire Lieutenant Michael Davidson. The 37-year-old was the nozzle man, the firefighter in front, operating the hose line. The official cause of the fire that took the life of the married father of four: heat from a boiler ventilation flue pipe ignited nearby combustible materials. 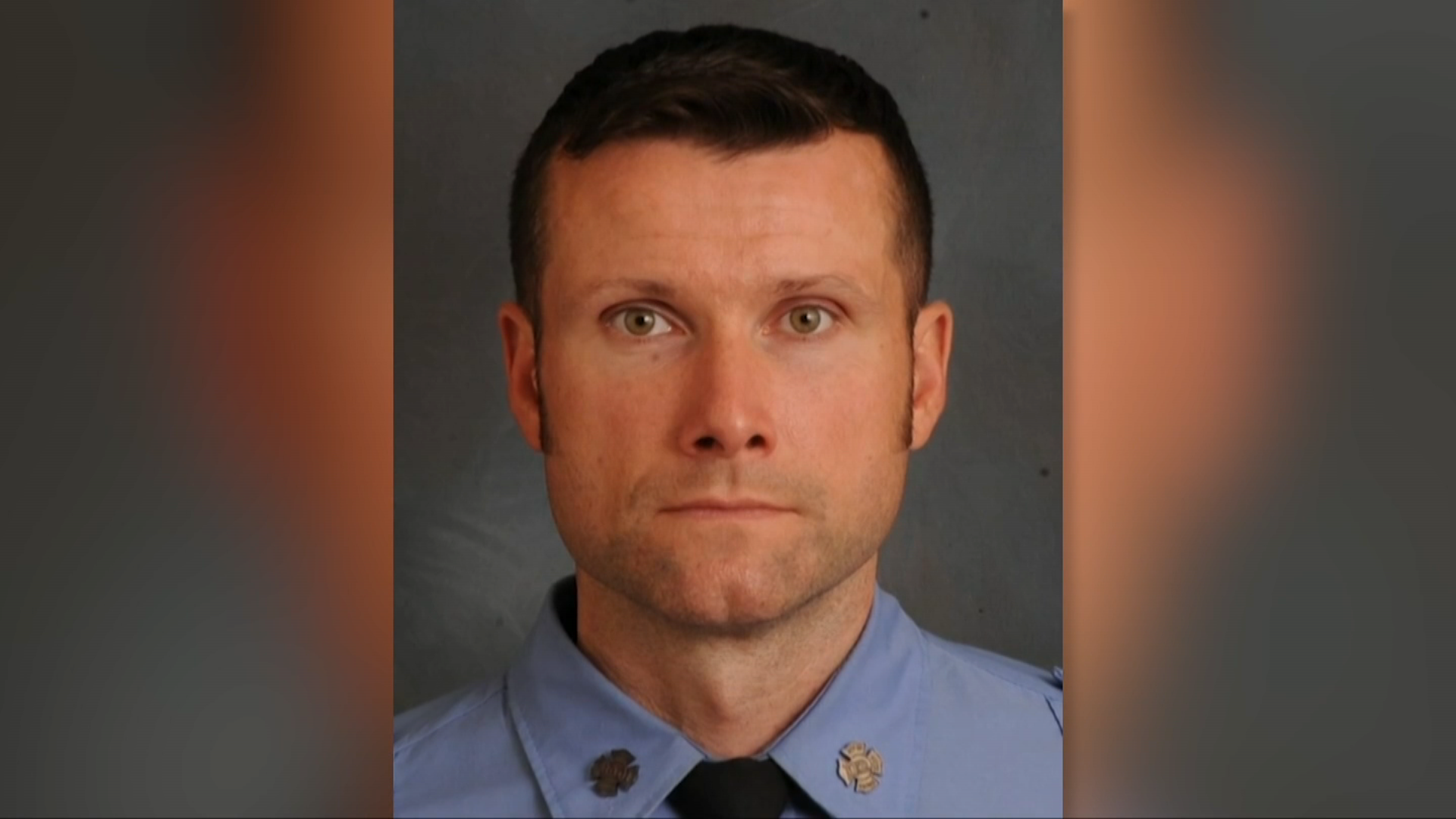 Buildings Department records also show the owner had failed to file an annual boiler inspection report with city for several years prior to the fire.

“We need to at least clear up the violations before you allow people to do any type of work in these building,” said Gerard Fitzgerald, the President of The Uniformed Firefighter Association of Greater New York.

“For $300 you can get a permit and do whatever you want," he said. "Those violations should at least be addressed before they allow people to go in there and make a more unsafe environment by bringing in those combustible materials or changing the outline of the apartment."

Fitzgerald is talking about the FDNY’s own report which concludes, "The movie production placed highly combustible materials on the walls throughout the first floor", that "created voids which initially concealed fire."

The FDNY report made several safety recommendations to the city looking to better regulate film shoots.  NY1 wanted to know if any changes had been implemented.  After days of asking the deBlasio Administration  issued this statement:

“The FDNY and MOME (Mayor’s Office of Media and Entertainment) are continuing to work together to protect the safety of the public on film shoots; that work includes reviewing our current practices.”

Among the FDNY’s recommendations was to more effectively communicate set construction between film productions and the fire department. According to the FDNY, the set on Saint Nicholas Avenue included new partitions making the building difficult to navigate.

Davidson was separated from his team and lost in thick smoke, overcome by the fumes after his oxygen tank ran out.

"He couldn’t get out of this fire. How desperate could he have been,” said Pamela Lee, the daughter of Doris Adams and her husband, Adolphus.

After taking in her parents things got even worse. In the last 18 months her father’s dementia got so bad they had to put him in a nursing home and Lee was diagnosed with brain cancer. They filed a suit against Ed Norton’s production company and the landlord who rented out the space. 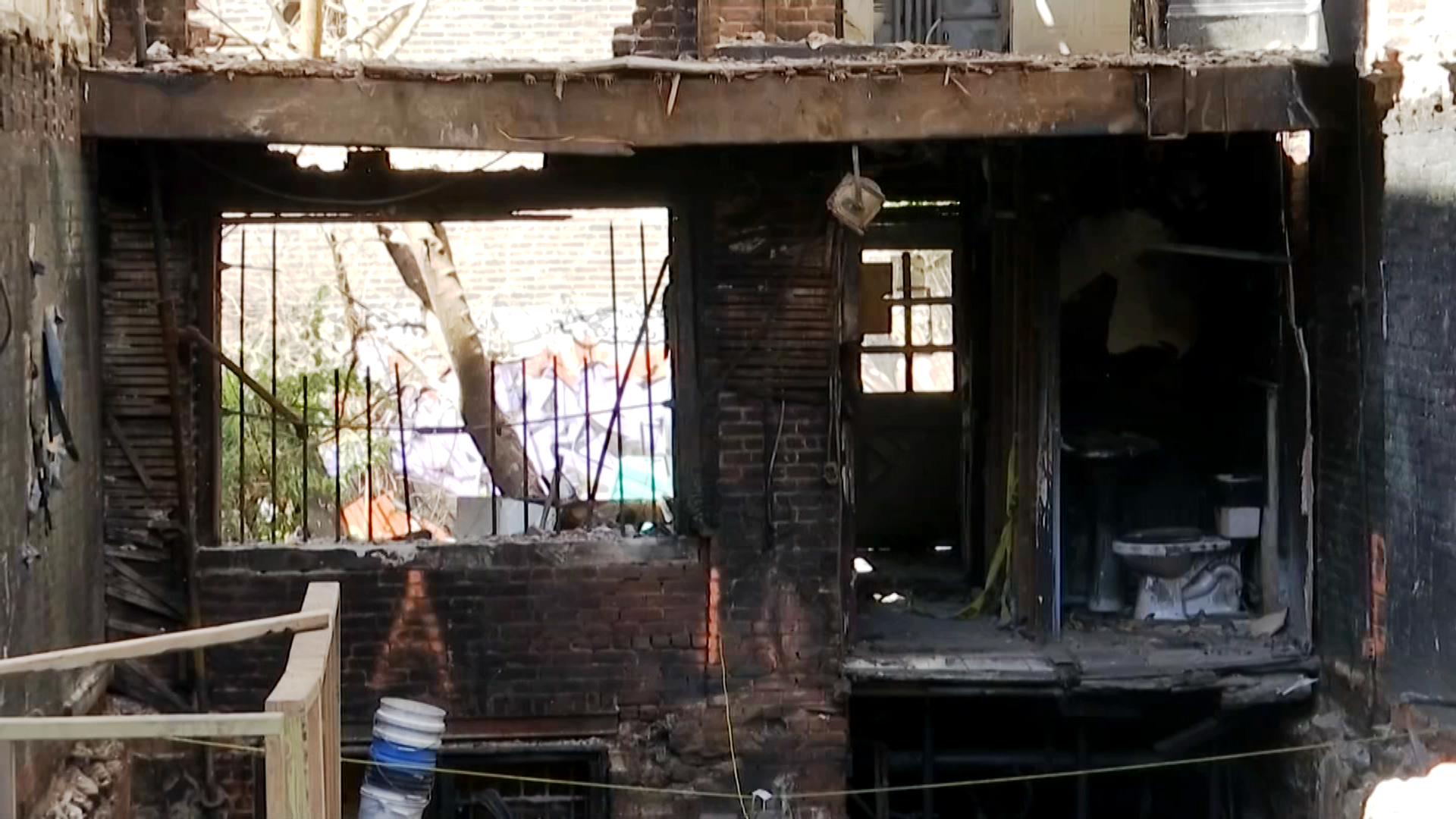 "So that was the urgency for me,” Lee explained choking back tears. "To see if I can get support to get her housing and things because in case something happens to me I would want my parents to care for. You understand. It's a difficult conversation to have."

A spokesperson for the producers of "Motherless Brooklyn" answered NY1’s questions:

Q: What has Class 5 Films done to improve safety and better communicate with the FDNY?

Q: What has Class 5 Films done to help assist with families that have been displaced or the family of FDNY Lieutenant Michael Davidson?

A: Our hearts go out to everyone who has suffered or been displaced due to the fire.  We cannot speak to all the things that have been done to provide assistance.  You should speak to … the FDNY Foundation which can provide you with more information on this subject.

Q: Is there a response to attorney Elizabeth Eilender who represents Doris and Adolfus Adams as well as Erica and George Cruz who are suing Class 5 Films. Eilender tells NY1 News that the company should be “ashamed” because “Their attorneys have filed every possible motion and every game and tactic under the law to delay the lawsuit from proceeding They have delayed justice. They have delayed recovery for these families that are desperate for home, belongings and some type of sense of justice."

A: It is the lawyers for plaintiffs that should be ashamed of themselves for continuing to perpetuate known falsehoods. The FDNY Safety Report clearly states that the boiler flue pipe was the sole cause of the fire.  The production was not responsible for the fire nor for Lt. Davidson’s death.  Tellingly, after the FDNY Safety Report was released, the lawyers for Davidson quickly moved to get permission to sue the city, which the court has now granted.”

“Additionally: The assertions of the tenants are both incorrect but more importantly completely irrelevant. The fire started due to a faulty boiler flue pipe in the cellar where the production had made no alterations and had no flammable materials. The attempts to attribute fault to the production for any actions related to the work it did on the floor ABOVE the fire break down fundamentally because none of that work had anything to do with the fire.  But, for the record, the production didn’t make any major or unapproved structural alterations. Indeed most of what the production did was to clean up and eliminate unsafe conditions.

Lastly, with respect to the “flammable” materials: As is custom and practice in filming at any location, the production took a number of steps prior to filming to ensure that the set met and complied with all relevant rules and regulations. This included visits from various officials, including the FDNY on numerous occasions, who inspected the set to ensure compliance. As part of these visits, the production was fully transparent with respect to the set design. It obtained all necessary permits to film at this location. Any materials on set were approved by the FDNY and other city officials, and they can be bought at almost any local hardware store. They are common household materials.”


18 Months Later – Why are Doris and Adolfus Adams Unable to Return Home?

Summary below provided by the Department of Buildings: