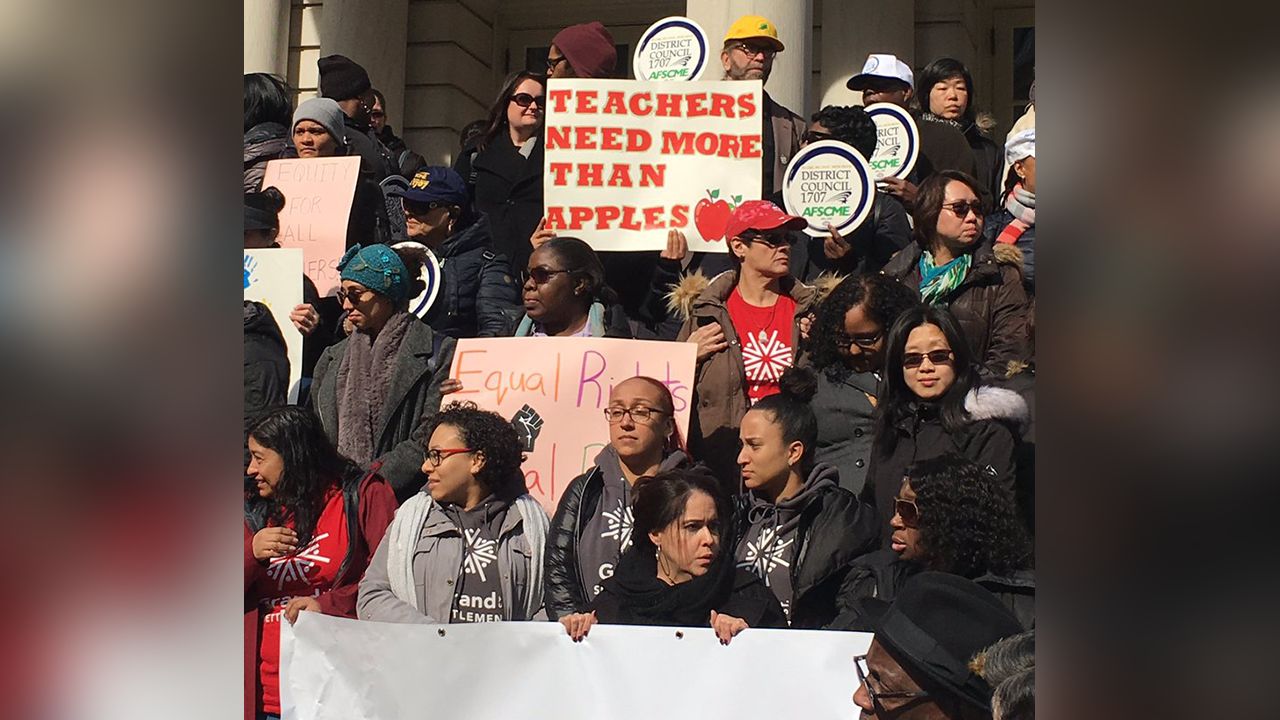 Some New York City pre-k teachers threatened Wednesday to strike over the huge pay disparity between them and their peers.

A large crowd parents, elected officials, and teachers from organizations that provide universal pre-k and "3-k" services to city children rallied outside City Hall in the afternoon, demanding income parity for all early education staffers.

Employees from Local 1707, who work at community-based organizations that provide pre-k and "3-k" services, make $15,000 less than their Department of Education peers after one year. The disparity is greater for those who teach for eight years, when there is a $35,000 difference in salaries.

These teachers are doing much of the same work, and teaching the same curriculum, as Department of Education teachers.

"This city relies on the community-based organizations for significant running of 60 percent of their programs," said Susan Stamler of United Neighborhood Houses. "They wouldn't be able to care for the kids in New York City if not for the community organizations."

"It's hard at times to cut ends-meet. You know, getting paid bi-weekly," teacher Molly Bermudez said. "It's really tough, but I'm making it work as much as possible.

Advocates have complained about the pay disparity for years, but it's taken on added significance as Mayor Bill de Blasio touts the success of his early education programs.

De Blasio says his administration values its non-city-employed teachers and is engaging with them to address the issue.

The city told us that reached a four-year agreement with DC1707 and the Day Care Council of New York in 2016 to provide some salary increases. The city said starting salaries are $50,000 for teachers with a master's degree and $44,000 for those with a bachelor's degree.

But those raises don't kick in until 2020 and the union wants the city to come to the bargaining table now.

The union does have enough support from its members to authorize a strike. If that happens, the pre-k and "3-k" teachers could strike as soon as May 2, which would send thousands of city parents scrambling to find child care for their three- and four-year-olds enrolled in these programs.