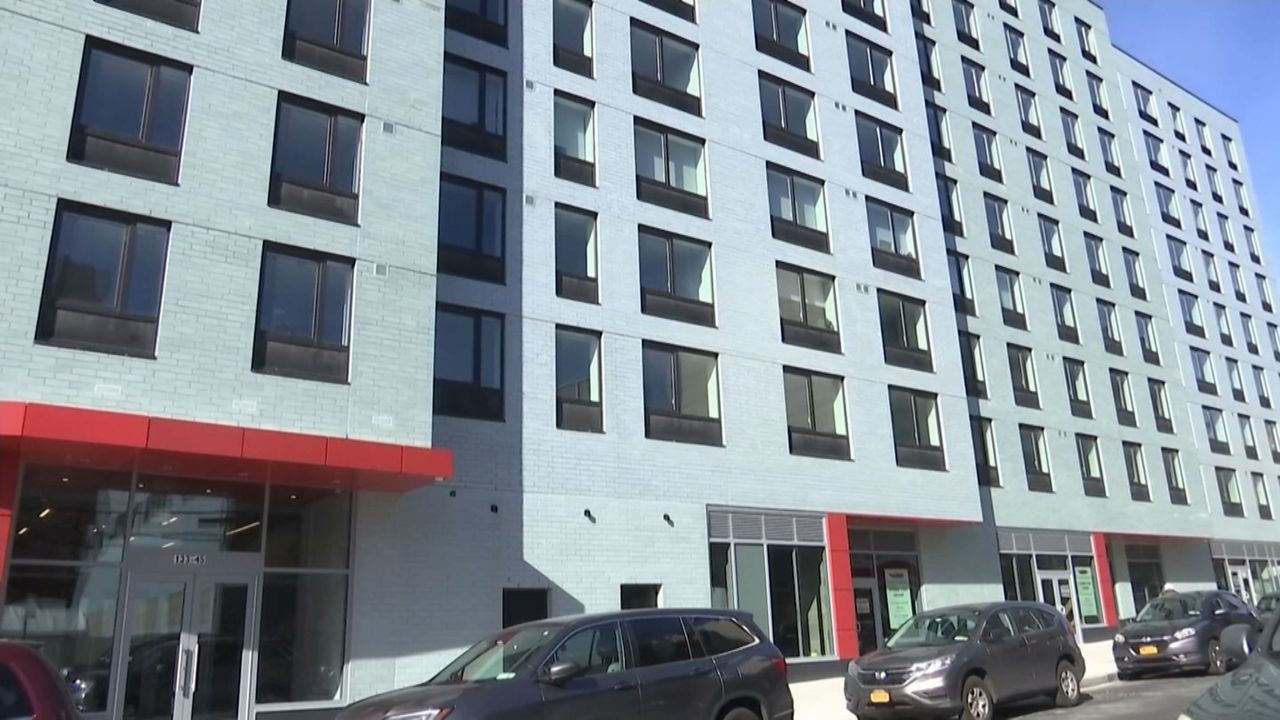 Andre Alexander is giddy with anticipation. He saw his new apartment this week.

"This is mine," he said as he looked at the closet and bathroom.

He’s been living on disability and panhandling after breaking his hip four years ago. He’s been homeless since September, sleeping wherever it is warm.

"I got a view," he shouted and laughed as he looked out of a third-floor window.

He signed up for 30 housing lotteries and beat astronomical odds to win this studio.

It's one of 232 units in this new building with a roof garden and a gym. Named One Flushing, it’s the first building completed under the city's three-year-old Mandatory Inclusionary Housing Law, or MIH, which mandates that at least a quarter of the units in rezoned residential property be permanently affordable.

Frank Dubinsky of Monadnock Development said the law "…requires actually that you build affordable housing and in return for that requirement you can build a larger building."

In this case, the building which sits at 133-45 41st Avenue will be 100 percent affordable. It takes up most of 41st Avenue between Main Street and College Point Boulevard and it sits on what was a municipal parking lot. The city sold it for $1 to a partnership between the nonprofits Asian Americans for Equality and HANAC with Monadnock Development.

"The idea is to lower the cost of capital so when you do build a building like this, it’s not under water from day one," Dubinsky said.

"MIH is a long game, right, because it does depend on rezoning, which takes time," Deputy Commissioner of Development at the Department Housing Preservation and Development Molly Park said.

Under MIH, individual buildings are rezoned, but so are entire neighborhoods. That has been a focus of the de Blasio administration. East Harlem and Inwood in Manhattan have been rezoned to allow for more dense development. As has Downtown Far Rockaway in Queens and East New York in Brooklyn. Under the new housing law, those rezoned areas are projected to add thousands more affordable units, but also larger buildings.

"As we see the next hot neighborhood come along those buildings get bigger, but what you’re also going to see is permanently affordable housing that allows those neighborhoods to stay to maintain income diversity and the vitality that comes with that," Park said.

Andre Alexander adds income diversity to One Flushing. So far, he’s the only homeless person developers know of who won this housing lottery.

According to the developers, here’s the breakdown of winners for the 231 total units (1 goes to the superintendent):

50% off the apartments received a preference for areas of Queens covered by Community Boards 3, 4 and 7.

66 of the low income units had a preference for a senior member of the household.

Alexander will pay what he can for his studio; the rest will be covered by a federal housing voucher known as Section 8.

"It’s a beautiful place and I’m gonna take care of it," he said.

There will be a ribbon cutting at the building on Thursday. Alexander is expected to move in next month.