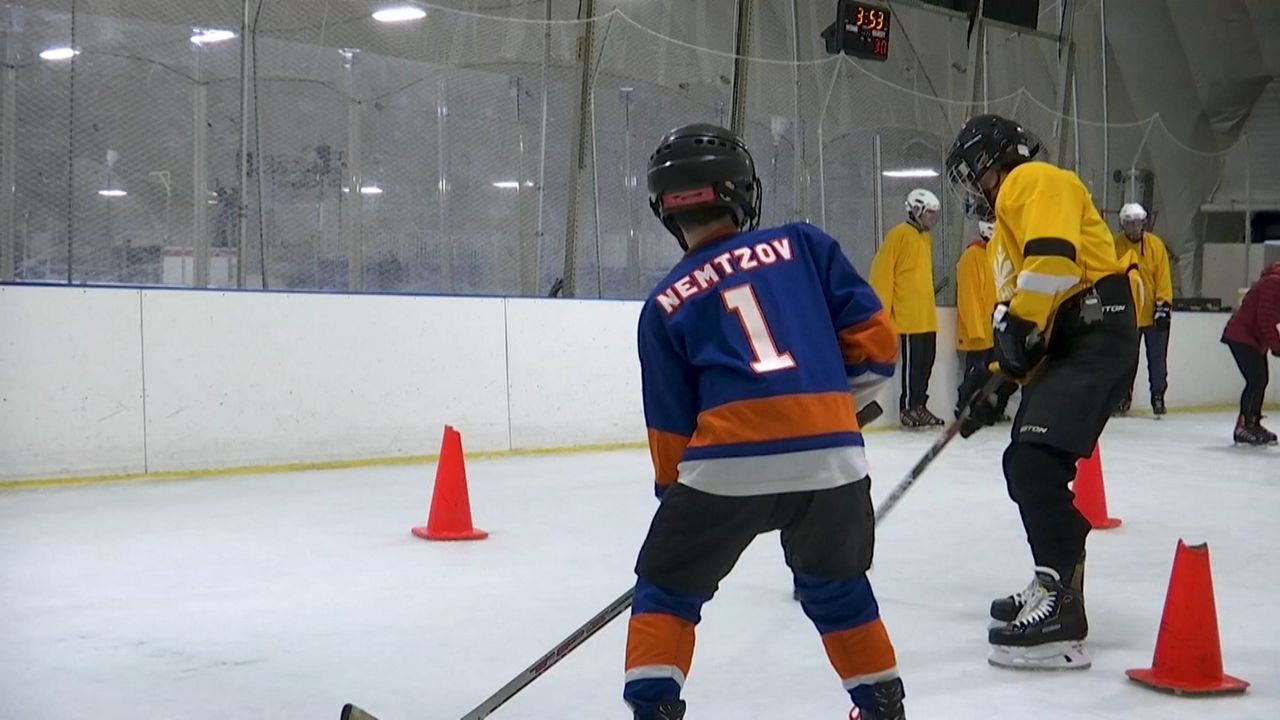 Nothing but Net: Players Score with NY Metro Blind Hockey

Lacing up skates, with a little bit of help from his team members, John Diodato loves to crack jokes. Even with his positive attitude, the Brooklyn man admits he never thought he'd be on the ice at the City Ice Pavilion in Long Island City training to play blind ice hockey with the city's first visually-impaired team.

"I have V2 vision It’s in the V2 group which means I can only see shadows and silhouettes," Diodato said​. He began losing his vision at the age of 10 due to a rare neurological disorder. When he had full vision, he loved BMX biking, but struggled to find a physical outlet after he became visually-impaired and required a cane to get around.

About eight months ago, that changed when he and his friends went to a New York Islanders game. A man by the name of Ted Caputo approached them.

"It’s a funny story," Caputo said, "I was going to the game with my two sons and as we were walking in, I saw three guys with canes. So I pretty much accosted them. I said, 'Hey guys. You’re hockey fans and I’m just hoping maybe you’d want to try blind hockey' and they said the same thing, 'what the heck is blind hockey?'"

It's quite similar to traditional ice hockey, with a few adaptations, Caputo said. Caputo is the founder of New York Metro Blind Hockey. It is the first and only visually-impaired ice hockey team representing the five boroughs and Long Island. Players range from legally blind to low vision.

"The net is the same width as a standard goal, but its brought down by a foot," he said. "There's also a couple of passing rules that you have to go past the blue line and passing once to a team mate before you can shot the goal."

Caputo, whose two sons play hockey despite visual impairments saw a great need in bringing this sport to the city, where a much larger of population of blind and visually-impaired people live due to its mass transit system.

"Life without being able to see so well is great in the city because you’re never alone and you have all the transportation you need," said Diodato.

Blind Ice Hockey began in Canada in the 1970s. The first American team was founded in upstate New York five years ago. No one on the city's first team has total blindness, which means a person is unable to see anything with either eye. But some with total blindness play in Canada and other teams. The NY Metro Blind hockey team does not yet have enough members to play full games games, but it is recruiting.

"I want to kind of be a role model for other people and showing sighted people that blindness doesn’t mean anything. We get through it. We can do anything you can do," Diodato said.

Their goal is to recruit and train enough players to begin ice hockey clinics this summer, and move on to competing in games with teams in North America. As a whole, the sport is aiming to qualify as a winter paralympic sport.