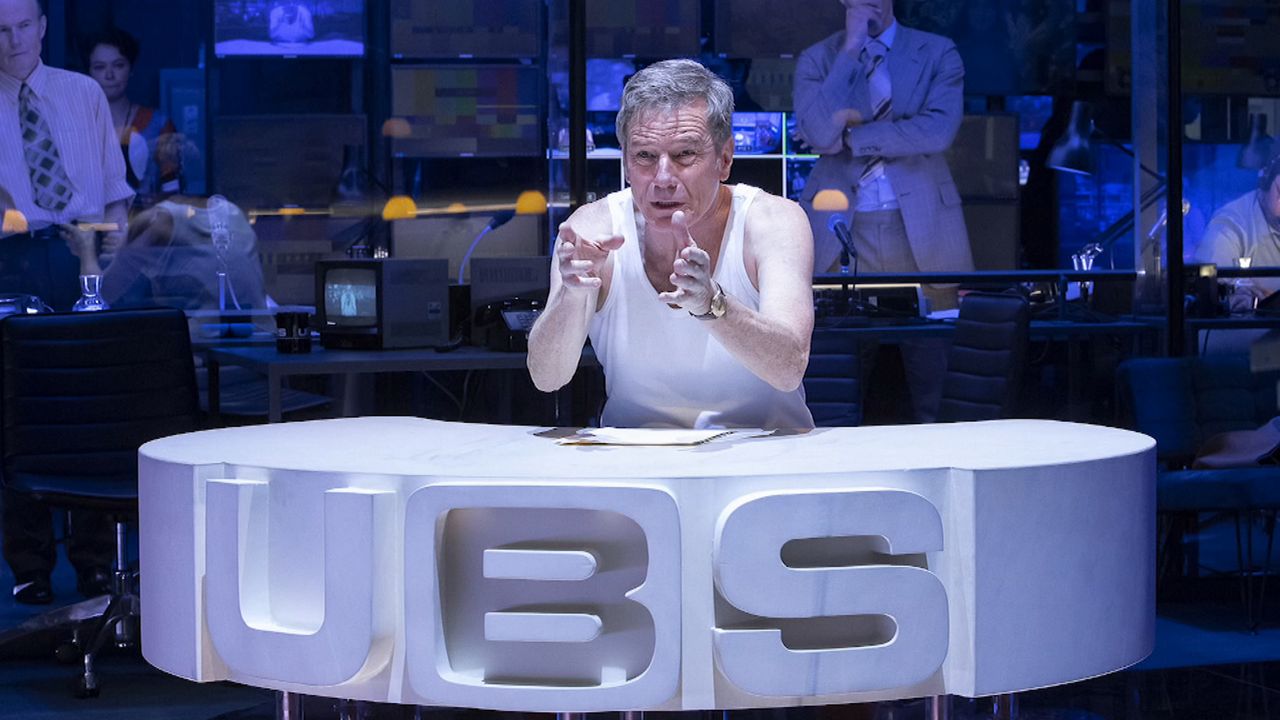 Paddy Chayefsky’s “Network” is one of my favorite films. The great 1976 satire was so eerily prescient about the blurred line between television news and entertainment. Acclaimed stage director Ivo Van Hove’s exhilarating production is a laudable effort to revisit Chayevsky’s chilling prophecy, but in this version, the towering presence of Bryan Cranston delivering a monumental performance upstages the medium and the message.

He is Howard Beale, the anchorman who was iconically “Mad as hell and not taking it anymore.” In the film, he was a catalyst but not the story’s protagonist. That was the William Holden character, world weary news producer Max Schumacher, here played by Tony Goldwyn. Through Max, we went down the rabbit hole of the news business, beholden to ratings and profit. And that new direction was led by the Faye Dunaway character, an entertainment producer, here played by Tatiana Maslany.

The stage adaptation, written by Lee Hall, puts the main focus on Beale and his very public mental breakdown. By doing so, we get to see a great actor pull out all the stops. Cranston’s performance ranks among the best I’ve ever seen on a live stage. It will go down as legendary.

But through a combination of miscasting and lopsided writing, the other performances pale by comparison, and whenever Cranston leaves the stage, the show flags.

And that’s even with Van Hove’s directorial flourishes. Set in a TV studio under a countdown clock, cameras follow every movement projecting scenes on a big screen. Audience members are seated stage left at tables eating and drinking, and at one point they get to watch Goldwyn and Maslany in a hot and heavy sex scene. Just before that, the two lovers are seen walking along 44th Street. It’s a novel idea but it makes little sense to see present day cars and pedestrians in a story that's set in 1975.

All that said, it’s still harrowing to hear Chayevsky’s foreshadowing of populism, the inertia of politics and the corruption of finance, even reality TV as we know it today. Not only did it all come true, but we’re now beyond the worst of his imagination. And if this “Network” doesn’t quite live up to the film’s shocking impact, it still offers what one character calls a “cleansing moment of clarity.”