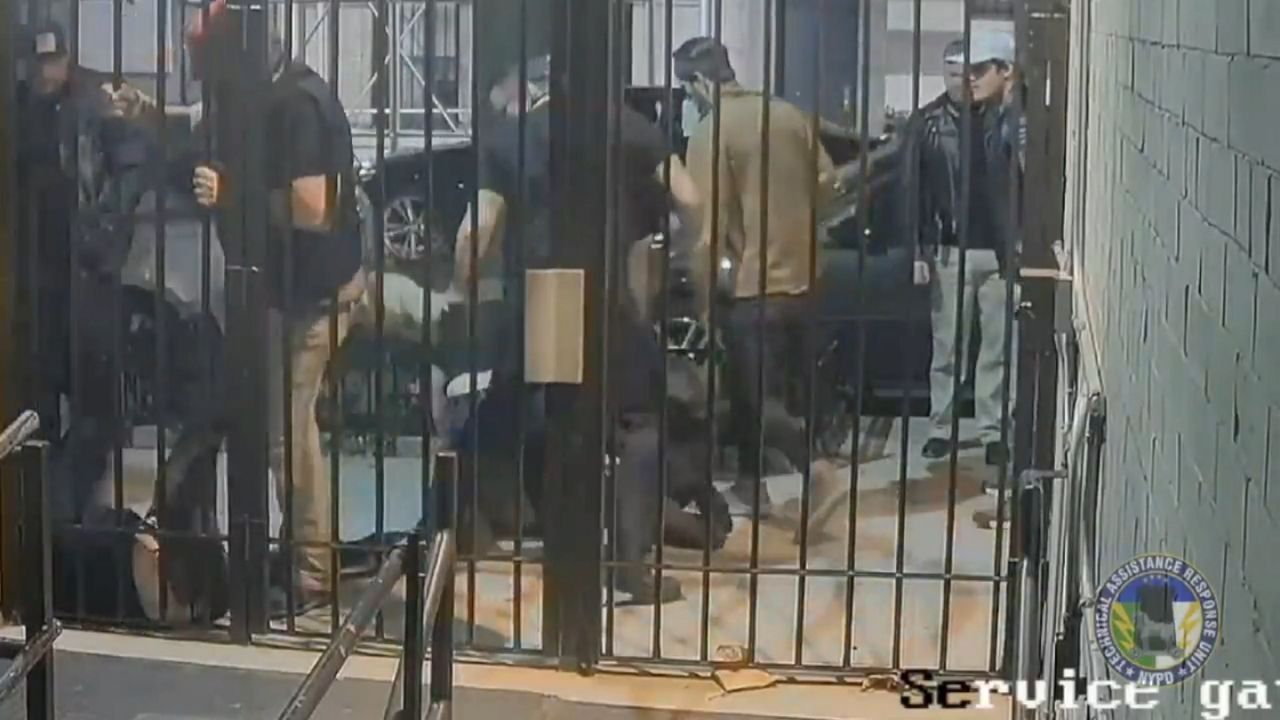 Police say they are searching for 12 members of far-right and far-left groups in connection to several brawls after a private Republican club in Manhattan hosted a speaker from the far-right group Friday.

The city police department released surveillance video Monday showing part of one brawl near the Metropolitan Republican Club on the Upper East Side. The club had invited Gavin McInnes, the founder of the Proud Boys, as a guest speaker.

At one point in the surveillance video, a group of people is seen throwing people they confronted to the ground before punching and kicking them. No serious injuries were reported, however, and police said the victims refused medical attention.

The #NYPD is looking for 12 people after this fight broke out Friday on the #UpperEastSide. It happened after a private Republican club hosted a speaker from a far-right group. https://t.co/99mhDF8AxF pic.twitter.com/pJ5NKOsF68

Police officials said nine of the people they were searching for are members of the Proud Boys, and three are from Antifa, a far-left anti-fascist group. The male-only Proud Boys describe themselves as "western chauvinists." The Southern Poverty Law Center has designated the Proud Boys a hate group.

According to the police department, three Antifa members were arrested for a separate incident on 84th Street, where a Proud Boys member's backpack was stolen.

The NYPD is asking anyone with information on the fights to come forward, and said it was investigating if the attacks were hate crimes.

The NYPD released the surveillance video of the fight Monday after it faced criticism for not making more arrests Friday night. That led to speculation the department did not have the resources it needed to respond to the violence. The NYPD contested that and said 48 officers were on the scene Friday with the primary mission to keep the two sides apart, arguing the police presence was more than adequate.

"There is a difference between being provided with information and having a prosecutable case," NYPD Chief of Detectives Dermot Shea said. "Any and all information on those individuals, we continue to seek information."

When asked why police officers did not make arrests on the spot at one of the fights, officials said everyone involved in the brawl dispersed when two to three officers on scooters arrived.

THE CAMPAIGN SEASON FIGHT, AFTER THE FIGHTS

The Republican club was vandalized ahead of Friday's speech by McInnes, who is also a co-founder of Vice Media. Statewide Republican officials said the damage included smashed windows, a spray-painted door, and a keypad lock covered in glue. A note left at the scene claimed that the damage was "just the beginning."

Republicans called on Democrats to denounce the destruction of property. The club had invited McInnes as part of its speaker series, but the building also has served as headquarters for New York Republicans since 1902.

The campaign office of Marc Molinaro, the Republican candidate for governor, is located in the building. When we asked him if McInnes should have been given the opportunity to speak at the club, Molinaro said no.

"We had no role, nor any idea and, quite frankly, I had never heard of the guy," Molinaro said.

But in a conference call with reporters, Cuomo said McInnes was invited by Republicans who knew there was the potential for violence.

"The state Republican Party organized this. They may be trying to lie about it today, but they can't because it's in writing and it's clear," the governor said. "I called for, and I repeat today, for every Republican elected official to repudiate the Proud Boys."

Members of the City Council and the state Assembly went a step further, calling on State Republican Party Chairman Ed Cox to step down.

"To Ed Cox, who continues to deal with this by using strategies right out of the Trump playbook, I say resign," City Council Speaker Corey Johnsons said at a press conference outside the club Monday. "You have proven yourself to be unworthy of your responsibilities."