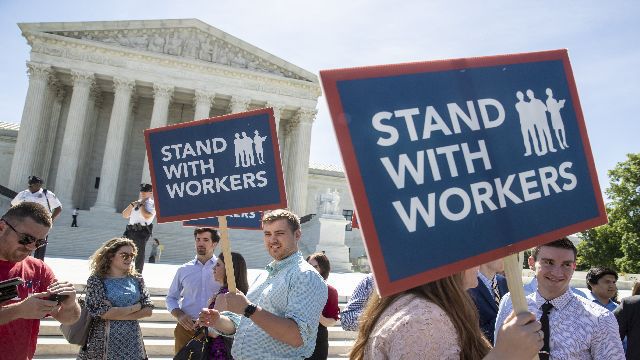 The Supreme Court ruled Wednesday that government workers can't be forced to contribute to labor unions that represent them in collective bargaining, dealing a serious financial blow to Democratic-leaning organized labor.

The court's conservative majority, re-empowered by Justice Neil Gorsuch, scrapped a 41-year-old decision that had allowed states to require that public employees pay some fees to unions that represent them, even if the workers choose not to join.

The 5-4 decision not only will free non-union members in nearly two dozen states from any financial ties to unions, but also could encourage members to stop paying dues for services the court said Wednesday they can get for free.

Union leaders said in reaction to the ruling that they expect to suffer some loss of revenue and also predicted that the same anti-union forces that pushed to get rid of the so-called fair shares that nonmembers had to pay will try to persuade members to cut their ties.

"There are already plans," said Lily Eskelsen García, president of the National Education Association. "They are going after our members."

But American Federation of Teachers President Randi Weingarten said unions would not be dissuaded: "Don't count us out."

The labor leaders spoke after the court ruled that the laws requiring fair share fees violate the First Amendment by compelling workers to support unions they may disagree with.

"States and public-sector unions may no longer extract agency fees from nonconsenting employees," Justice Samuel Alito said in his majority opinion in the latest case in which Gorsuch, an appointee of President Donald Trump, provided a key fifth vote for a conservative outcome.

Trump himself tweeted his approval of the decision while Alito still was reading a summary of it from the bench.

Supreme Court rules in favor of non-union workers who are now, as an example, able to support a candidate of his or her choice without having those who control the Union deciding for them. Big loss for the coffers of the Democrats!

In dissent, Justice Elena Kagan wrote of the big impact of the decision. "There is no sugarcoating today's opinion. The majority overthrows a decision entrenched in this Nation's law — and its economic life — for over 40 years. As a result, it prevents the American people, acting through their state and local officials, from making important choices about workplace governance. And it does so by weaponizing the First Amendment, in a way that unleashes judges, now and in the future, to intervene in economic and regulatory policy."

The court's three other liberal justices joined the dissent.

In one sense, Wednesday's result was no surprise and merely delayed by the unexpected death of Justice Antonin Scalia in 2016. The court split 4-4, after Scalia's death, when it considered the same issue in 2016.

When Trump was elected, opponents of the fees hurried a case back to the court. And fearing what would happen, unions strongly opposed Gorsuch's nomination to the high court.

The unions say the outcome could affect more than 5 million government workers in about two dozen states and the District of Columbia.

The case decided Wednesday involved Illinois state government worker Mark Janus, who argued that everything unions do, including bargaining with the state, is political and employees should not be forced to pay for it.

The unions argued that fair share fees pay for collective bargaining and other work the union does on behalf of all employees, not just its members. More than half the states already have right-to-work laws banning mandatory fees, but most members of public-employee unions are concentrated in states that don't, including California, New York, and Illinois.

A recent study by Frank Manzo of the Illinois Economic Policy Institute and Robert Bruno of the University of Illinois at Urbana-Champaign estimated that public-sector unions could lose more than 700,000 members over time as a result of the ruling and that unions also could suffer a loss of political influence that could depress wages as well.

Alito acknowledged that unions could "experience unpleasant transition costs in the short term." But he said labor's problems pale in comparison to "the considerable windfall that unions have received...for the past 41 years."

Billions of dollars have been taken from workers who were not union members in that time, he said.

Kagan, reading a summary of her dissent in the courtroom, said unions only could collect money for the costs of negotiating terms of employment. "But no part of those fees could go to any of the union's political or ideological activities," she said.

The court's majority said public-sector unions aren't entitled to any money from employees without their consent.

UNIONS IN NEW YORK LASH OUT AT THE DECISION

The decision takes aim at public sector unions — the very unions that play an influential role in New York politically.

Union members denounced the ruling at a rally outside City Hall on Wednesday.

Public sector unions rallying outside City Hall to protest @Scotus decision stripping unions of the power to force workers to pay union dues, even if they don’t want to be part of the union. Decision is a blow to municipal unions & potentially a blow to their political power. pic.twitter.com/di4mUYMCKO

New York Gov. Andrew Cuomo, who has deep ties to organized labor, said the decision is part of a larger effort to destroy the labor movement.

Flanked by labor leaders, Cuomo later signed an executive order to keep personal contact information for state employees private.  He argued it was a protection against possible union-busting efforts.

"I look forward, as we move forward in this fight, to making sure that New York is out there, loud and proud and, more importantly, that we continue to kick these people where they deserve to be kicked," said Mike Mulgrew, the president of the teacher's union, the United Federation of Teachers. "As I promised my mother numerous times, I will pray for all of them when they are burning in hell."

Unions have historically been politically powerful players in Democratic politics. They can use their wide member base to campaign for candidates they support and against those they do not.

Richard Steier edits the labor-focused newspaper, "The Chief." He said it's too early to predict whether the Supreme Court's ruling will diminish the political power of organized labor.

"It all depends how well the unions cope with the fallout of this," Steier said. "If they are able to engage their members more, get them more involved, then they may be able to offset the loss of dues income."

For now, union leaders are just trying to rally their members and bring more public sector workers into the fold.