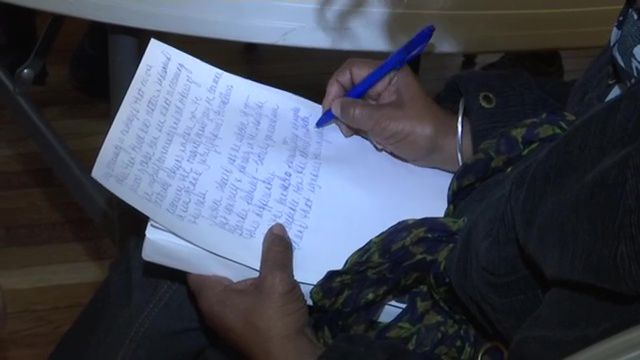 The words poured out, and their pages quickly filled with their pleas for justice for Eric Garner.

"Reopening the investigation, I think would, I think would be an opportunity for the truth really to be uncovered," said Juliet Moore of hte Unitarian Church.

The father of six died on a Staten Island street of a chokehold at the hands of police, who were trying to arrest him for allegedly selling loose cigarettes.

The encounter between Garner and Officer Daniel Pantaleo was caught on cellphone video that went viral. Garner can be heard repeating "I can't breathe" 11 times.

The medical examiner ruled the death a homicide, but when a Staten Island grand jury decided there wasn't enough evidence to charge him for Garner's death, protests erupted all over the country:

"From the video and everything, it should have been a slam dunk case. And from that point on, any delay in justice is an injustice," said Bob Pipkins of Black Lives Matter.

Weeks ago, multiple sources reported that prosecutors in the civil rights division of the Department of Justice recommended charges against Pantaleo. But it appears officials have reached an impasse, as some of them are uncertain if the case is winnable.

After that news, the group here decided to take action.

Some of their letters will be sent to Staten Island District Attorney Michael McMahon, imploring him to convene a new grand jury for Garner's case. Others will press the mayor to fire Pantaleo, who has been on desk duty since just after Garner's death. Still more will be sent to the governor, asking him to convene a special grand jury and reopen the case.

"We know that the grand jury came out with a non-indictment against the officer, primarily, and the officers involved in it, but we're not accepting that. We're not satisfied with that," said Mike Stein of the Unitarian Church.

Unitarian Church officials say they've already been approached by clergymembers from synagogues and churches across the borough in an effort to join in on the letter writing campaign.