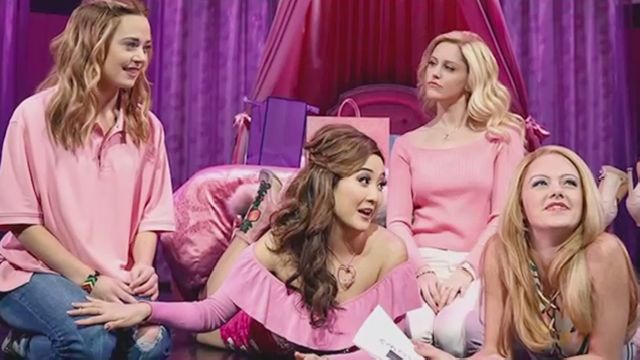 "Mean Girls" is the latest Broadway musical based on a popular screen title. It's a trend that not everyone applauds. But with Tina Fey adapting her own 2004 screenplay for the stage, "Mean Girls" on Broadway is so fetch — and if you get the reference, this is the show for you.

Fey updated her sharply amusing story about high school tribal culture to the present. It's now framed as a cautionary tale. And while Fey and her most excellent director, Casey Nicholaw, made canny use of theatrical conventions for the musical, it still follows the film quite closely.

Cady, who's just moved to the United States from Africa, is having a hard time fitting in to the various cliques segregating the students at her new high school. She befriends a pair of mavericks, artsy Janis and Damian, who's gay, who warn her about Regina George, the school's most popular mean girl and her posse known as "The Plastics." Cady falls in with them, suffers boyfriend problems, and learns some valuable life lessons in the process.

Fey's book is very funny and warm. She totally gets the teen culture and all the superficial drama that defines the high-school years. And if the score, by her husband Jeff Richmond with lyricist Nell Benjamin, lacks a big memorable number, the tuneful songs enhance the material quite nicely.

Nicholaw, who also choreographed, paces the two-and-a-half hour production with high energy, maneuvering between the silly and serious moments with tremendous finesse. The clever video design with non-stop projections is a huge plus as well.

Erika Henningsen as Cady and Taylor Louderman as Regina mirror their film counterparts most impressively. Kerry Butler aces each of her multiple roles.

Kudos as well to Barrett Wilbert Weed and Grey Henson, along with "The Plastics'" Ashley Park as Gretchen, suffering the angst of being the #2, and Kate Rockwell with her hysterical line readings as the clueless Karen.

Film-to-stage adaptations are always tricky to pull off. Happily, this time around, a first-class collaboration puts us in the company of "Mean Girls" you will love to hate.