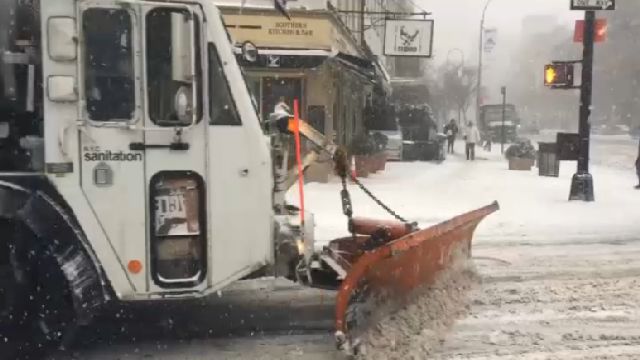 State of Emergency for NYC as Nor'easter whips through

A winter weather emergency and state of emergency have been declared for the city as the first major snowstorm of the year arrived Thursday with blizzard-like conditions.

Another 1 to 2 inches of snow may be possible as the snow tapers off.

A Winter Storm Warning is in effect for the five boroughs and will last until 12 a.m. Friday.

Mayor Bill de Blasio says the Winter Weather Advisory has been issued to help clear the city's streets and roadways, allowing for emergency vehicles to get through.

He says any vehicles that block snow removal equipment will be towed.

The mayor also urged New Yorkers to prepare for bitter cold wind chills heading into the weekend which will make it feel like -20 degrees.

"This is where New Yorkers have a choice to make and I want people to make the smart choices," said De Blasio. "Stay inside if you can, if you don’t need to be on the roads don’t be on the roads. That’s for your own safety and to allow the sanitation workers to do their work so they can clear the roads for everyone else’s safety. If you go out, go out for as little time as possible. If you have to walk somewhere, bundle up, take precaution because it’s bitterly cold and with the wind it’s even worse."

As the snowstorm ramped up Thursday, winds strengthened, causing limited visibilities across the five boroughs, prompting Governor Andrew Cuomo to issue a State of Emergency for the city as well as Westchester and Long Island.

Governor Cuomo and MTA Chair Joe Lhota say they do not plan to shut down the city's subway system, roads, bridges or tunnels.

During a phone interview on Mornings on 1, Cuomo said the city and state are well prepared for anything mother nature brings but there's only so much they can do in white out conditions.

Conditions across the city should ease in the afternoon.

Gusty winds will continue Thursday night as the storm pulls away towards New England. Those winds could cause more blowing and drifting of the fresh snow.

New Yorkers will have to contend with icy spots from leftover snow, as temperatures will remain below freezing. High temperatures are expected to top out mainly in the teens and 20s, with overnight temperatures falling into the single-digits at times and wind chills dropping even lower.

The wind chills Friday night and Saturday night could be as low as -10 to -15 degrees, as wind gusts will be, at times, 30 to 40 miles per hour.

New York City public schools are closed Thursday due to the snowstorm. The mayor tweeted out late Thursday afternoon that schools will be open Friday.

CUNY schools will be closed Thursday. Essential staff are still expected to report.

St. Joseph's College in Brooklyn will be closed Thursday.

New Yorkers are urged to be careful when walking outside or traveling, and to give themselves extra time for their commute.

The city's Office of Emergency Management and Transportation Department will work hand-in-hand in the cleanup. Salt spreaders will be sent out as soon as the snow sticks to the pavement.

The city transportation department has suspended alternate side parking rules through Saturday.

Meters will remain in effect.

City transit will be running but riders should anticipate delays on subways and buses as the storm intensifies.

Metro-North was reporting good service as of early Thursday afternoon.

Amtrak will operate on a modified scheduled between the city and Boston, with fewer Acela Express and Northeast Regional service trains. Contact Amtrak to see a full list of service changes and closures, overall.

The Staten Island Ferry will be operating on a modified schedule during the morning rush with service approximately every 20 minutes.

Seastreak Ferry Service is suspended for the day.

NYC Ferry service will be suspended at noon.

The Port Authority of New York and New Jersey has urged travelers to check with their airline carriers before heading to LaGuardia, JFK, or Newark Airports.

Newark saw the most cancellations with 867 flights.

JFK Airport: The airport is open. All flight activity is suspended due to wind and whiteout conditions.

AirTrain JFK is suspended. A busing operation is in place.

LaGuardia Airport: The airport is open. All flight activity is suspended due to wind and whiteout conditions.

Airline passengers are strongly urged to call their carrier before going to the airports today or later this week and also should not go to the airports unless they have a reservation.

The bus terminal is open.  Commuter carriers are operating normally.  Cancellations have been reported by long-haul carriers and travelers should check on the status of their specific bus line before going to the bus terminal.

PATH is operating on a normal weekday schedule

Sanitation crews will be working 12-hour shifts to keep the streets clear.

Workers have been out since 7 p.m. Wednesay.

Residents can track the progress of the city's plows online.

PlowNYC shows how recently they have passed on a street-by-street basis in all five boroughs.

You can see the map at nyc.gov/plownyc.

The city is reminding New Yorkers to call 311 if they see a person living out on the street, as a person can suffer frostbite in 30 minutes.

Also, call 311 or log on to NYC.gov if you have heating complaints. According to the city,

landlords are required to maintain the heat inside at 68 degrees Fahrenheit or above when the temperature is 55 degrees or below outside between 6 a.m. and 10 p.m.

Between 10 p.m. and 6 a.m., landlords are required to maintain the heat inside at least 62 degrees Fahrenheit or above, regardless of the temperature outside.

Federal courts in Manhattan, White Plains, and Poughkeepsie will be closed Thursday. The United States District Court for the Southern District of New York advises people to contact individual chambers to check on the status of any scheduled proceedings.

The strongest of the storm is expected to stay over the Atlantic Ocean. By Thursday night, the storm will move away from the city but pull in the arctic winds. High temperatures will be in the teens Friday and Saturday.

Temperatures are expected to rise above freezing next week, with a chance of rain and snow.

Monday was the city's coldest New Year's Day on-record, with temperatures maxing out at 1 degree and wind chills in the negatives.