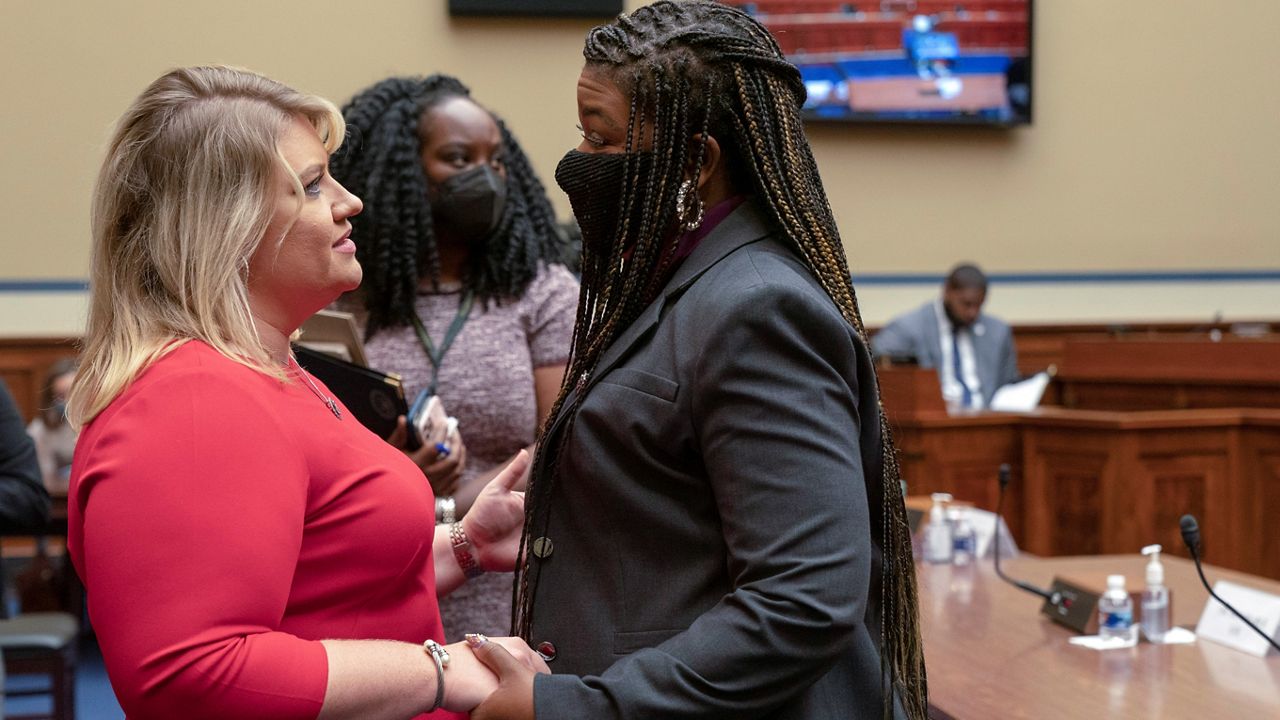 Lawmakers, activists, doctors and others appeared before the House Oversight Committee Thursday at a hearing aimed at examining abortion access in the United States, a right which Democrats argue is facing an existential threat under a conservative-leaning Supreme Court, and newly emboldened GOP state legislatures which have passed a spate of restrictive abortion legislation.

Thursday’s hearing came on the heels of a Senate Judiciary Committee hearing the previous day, which focused on the Supreme Court’s “shadow docket” process – and, more specifical, the high court's decision to temporarily uphold a restrictive Texas law which bans abortions after 6 weeks, including in cases of rape and incest. Other Republican-led are considering enacting similar measures.

Witnesses in Thursday’s hearing included House lawmakers — some of whom shared emotional stories about their own abortions — as well as professors, Texas-based OB-GYNs, and activists, including famed lawyer Gloria Steinem.

“It is completely backwards that a majority of Americans support preserving abortion rights, while at the same time, more and more states are working to block them,” she added.

In Thursday’s hearing, Democrats sought to make the case that other states hostile to abortion rights are seeking to follow Texas' lead.

“If we do nothing, the law will not be limited to Texas," Maloney warned.

The testimony comes as a federal appeals court is weighing the fate of a Missouri abortion law that bans the procedure after eight weeks of pregnancy. Like the Texas law, it contains no exceptions for cases of rape and incest.

And on Dec. 1, the Supreme Court is slated to hear oral arguments in Dobbs v. Jackson Women’s Health Organization, involving a challenge to a Mississippi abortion law that bans most abortions after 15 weeks of pregnancy. Even before the court's decision to uphhold the Texas law, Dobbs v. Jackson Women’s Health Organization was widely considered to be a test case that could potentially challenge Roe v. Wade.

“Extremist state governments are no longer chipping away at constitutional rights – they are bulldozing right through them,” Maloney said.

Lawmakers also focused on what they characterized as the “urgent need” to ensure abortion access.

Options they cited include ending the Hyde Amendment, which restricts government funding for most abortions, and passing a law guaranteeing a woman’s right to an abortion. Last week, the House successfully passed that measure, but any GOP opposition would almost certainly guarantee its failure in an evenly split, 50-50 Senate.

These three lawmakers – Reps. Cori Bush, D-Mo., Pramila Jayapal, D-Wash., and Barbara Lee, D-Calif. – each shared stories of their abortions, and why they champion that right for other women. At times, the lawmakers broke into tears.

Rep. Cori Bush, D-Mo., a first-term congresswoman, described in gut-wrenching detail a sexual assault that resulted in a pregnancy when she was only 17.

“Today I sit before you as that nurse, and as a pastor, activist, survivor, single mom, and Congresswoman to testify that in the summer of 1994 I was raped, became pregnant, and chose to have an abortion,” Bush said in her opening remarks.

“Choosing to have an abortion was the hardest decision I have ever made,” Bush continued. “But at 18 years old, I knew it was the right decision for me. It was freeing.”

Meanwhile, Jayapal shared the story of her pregnancy with her first child, Janak, now 25. Janak who was born 26.5 weeks premature at only 1 pound and 14 ounces, she said, resulting in medical conditions that frequently landed them in the hospital.

Jayapal said that when she became pregnant again, she consulted with doctors “who told me that any future pregnancy would likely also be high risk to me and the child, similar to what I had gone through with Janak.”

"Terminating my pregnancy was not an easy choice,” Jayapal said. It was “the most difficult I've made in my life. But it was my choice, and that is what must be preserved for every pregnant person."

“It is simply nobody’s business what choices we as pregnant people make about our own bodies,” she added.

Meanwhile, Republicans on the panel said the government should invest in alternatives to abortion — and argued that, in any case, it is an issue that should be left to the states.  and that in any case Congress should leave these issues to the states

In his remarks, Rep. James Comer, R-Ky., sought to dismiss the Texas law as a state matter over which the panel “has absolutely no jurisdiction.”

Rep. Nancy Mace, R-S.C., also echoed that point, asking the panel rhetorically, “What the [expletive] is going on here today? We don’t have oversight over state abortion rights."

“This is not the purpose of this committee,” she added.

And Rep. Kat Cammack, R-Fla., sharing her own experience as the child of a woman who had “strongly considered” an abortion, but ultimately opted not to get the procedure.

“I would not be here were it not for the very brave choice my mother made 33 years ago,” Cammack said. “Because of her strength, she chose life. That wasn’t an easy decision for a single mom, a working-class mom.”

"Many folks around the country don't know or understand the severity of this abortion ban," Diana Gómez, the advocacy director of left-leaning advocacy group Progress Texas, told Spectrum News in an interview. "So we're hoping to talk to people's hearts as well around the country."

Thursday’s hearing comes just days before thousands of protesters are expected to mass in Washington, D.C. Saturday for the fifth annual Women’s March.

Organizers say this year's event will focus on abortion access – and in that vein, they also changed the date from January to October, so it could occur before the start of the new Supreme Court term on Monday.

Leaders of this year’s Women's March said they have applied for permits for up to 10,000 people, with some 600 “sister marches” planned in cities across the country.