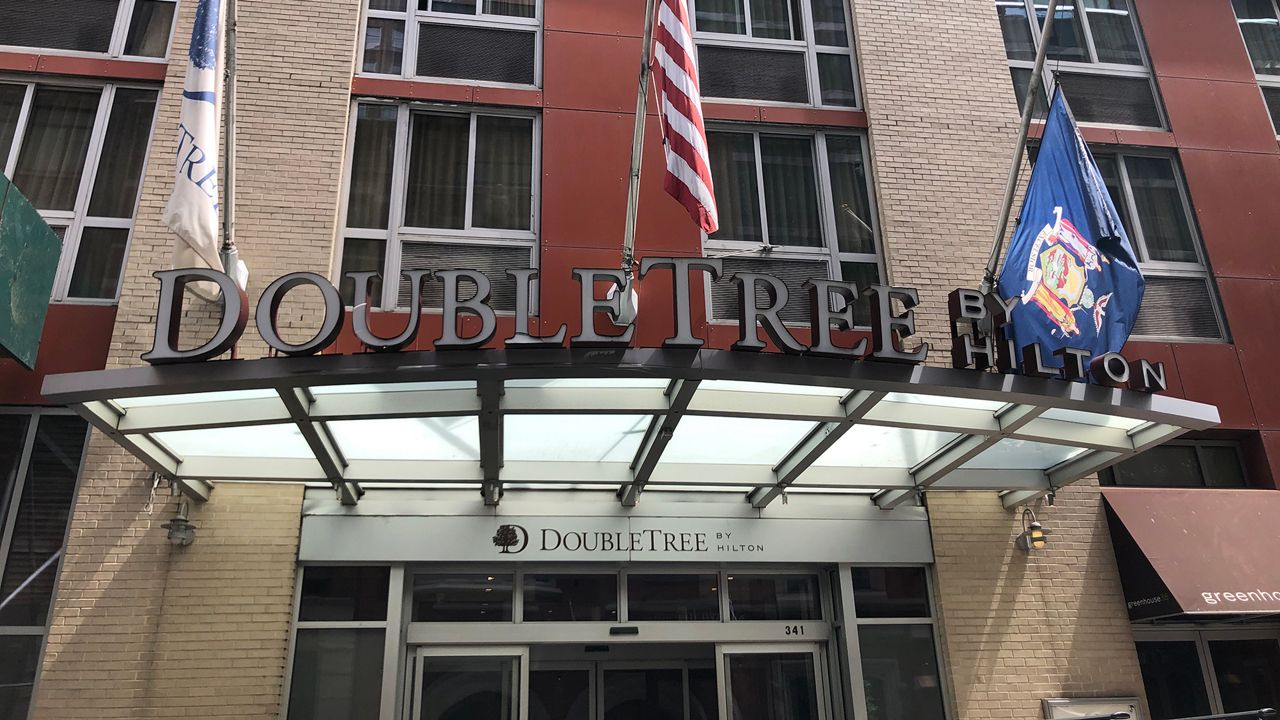 West 36th Street in Manhattan has changed a lot over the last two months.

The block between Eighth and Ninth avenues is now home to two homeless shelters — shelters that had not been there this spring. One is located in a SpringHill Suites. The other is in a DoubleTree Hotel.

When we visited this week, men were hanging out on the sidewalk. Some were visibly intoxicated. One demanded we and our camera leave the premises.

Troy Sterling said he has been in the shelter system for eight months. Two of them have been at the DoubleTree.

“The clientele in the NAICA shelter system need more help than what they are given,” Sterling told us. NAICA, a shelter provider based in The Bronx, runs this particular facility. "They are no threat. They are more of a threat to themselves."

"These guys are on drugs,” he added. "K2. Heroin. Crack. They focus more on using. They are no threat to nobody."

Neighbors have complained, saying these men have “aggressive physical and verbal behavior.”

A letter from the local community board says, "We have also received reports of public intoxication and narcotics use. The residents of the block often observed shelter residents not wearing masks or maintaining social distance, loitering, littering, and getting into verbal altercations. One neighbor reported he was mugged by a shelter resident."

Complaints like this are coming in from several neighborhoods across the city, all of which have recently seen the de Blasio administration convert local hotels into temporary homeless shelters. It is part of an ongoing program to combat the spread of COVID-19. In the past several months, the city has moved homeless men and women from dorm-like shelters into 63 hotels so they can better socially distance.

Up until now we did not know where those hotels were located. The Department of Homeless Services did not disclose where they were because of privacy reasons.

NY1 has exclusively obtained a breakdown of where those hotels are by community district, showing Midtown has received far more of these so-called “COVID Hotels” than any other area of the city.

There are seven hotels-turned-shelters in community district 4 in Manhattan, which covers the Garment District and Hell’s Kitchen. That is where Sterling is staying.

Across Eighth Avenue in community district 5, which covers most of Midtown, there are now 12 hotels housing the homeless — more than any other area in the city.

For weeks, residents on the Upper West Side have complained of hotels in their neighborhood housing the homeless. That area now has four hotels — far less than Midtown.

Long Island City in Queens has also seen an influx of this type of temporary shelter as well. Community district 1 in Queens now has seven.

But the concentration of these facilities in Manhattan, especially in Midtown and Hell’s Kitchen, is starting to draw attention and concern.

Nick Accardi owns several restaurants in Manhattan, and another with his brother John. One of those establishments is Tavola, an Italian restaurant on Ninth Avenue. Accardi tells us the neighborhood has become “unbearable” and the police aren’t doing enough.

He says he is sympathetic to those experiencing homelessness, but argues there are "too many” now in his neighborhood. He says he has seen people defecate in front of his customers. He started a petition to try to get the city to act, either by moving homeless individuals out of the hotels or increasing the police presence.

“There is just too many in one area, and they haven’t been vetted properly,” Accardi said.

The complaints are not moving the Department of Homeless Services to make changes. The city is not moving to relocate any of these shelters-slash-hotels.

A spokesperson for the Department of Homeless Services said, “From the outset of the pandemic, our strategic use of commercial hotels has been about health, safety, and stopping the spread of the virus—and our data shows these actions have saved lives. It is an undeniably challenging time – physically, emotionally, psychologically, and more – for our City and for all New Yorkers, regardless of housing status, with the New York and national economies struggling severely and unemployment high across all groups of people, types of professions, and walks of life. To that end, it is not accurate to attribute all challenges to homelessness. For those New Yorkers who are currently experiencing homelessness, we and our provider partners are doing everything we can, under extraordinary circumstances, to ensure they are as protected from the virus as housed New Yorkers and also provided with the services they need to continue getting back on their feet. We’re committed to adapting to a constantly evolving situation, and as members of the community, we intend to be good neighbors, engaging openly and making this the best and safest experience it can be for these individuals as they get back on their feet.”