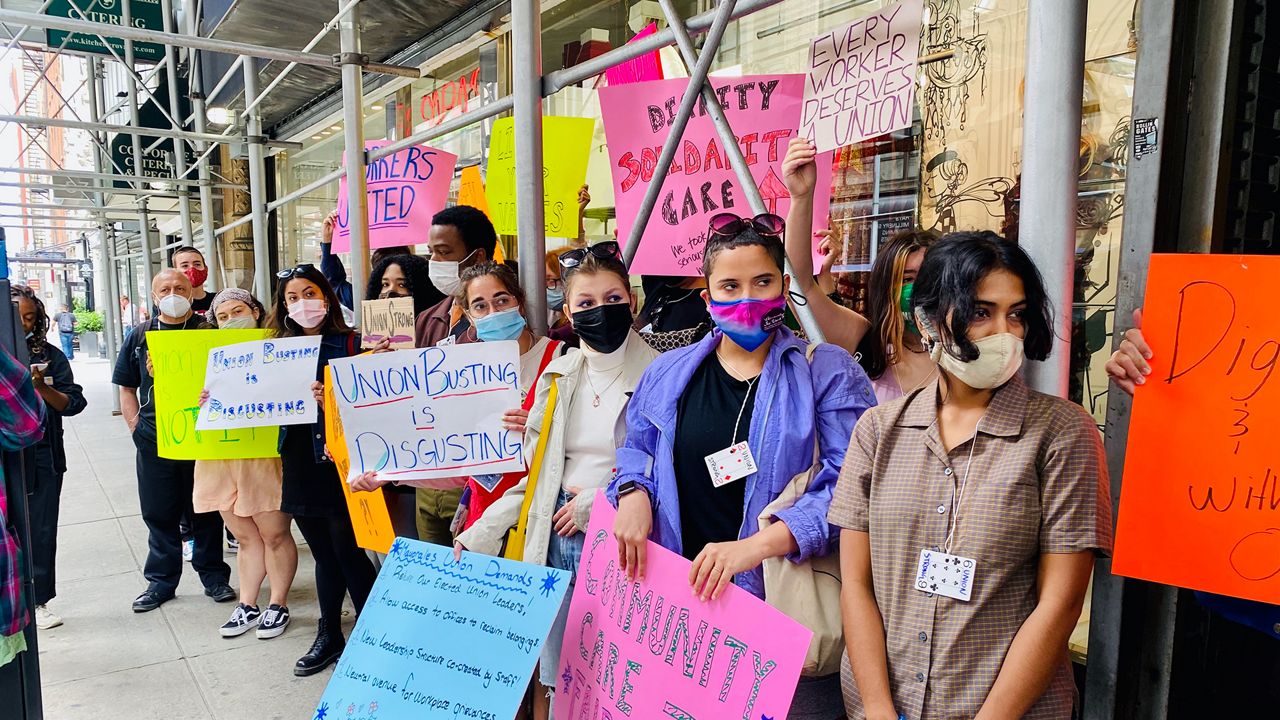 They took to the streets to protest against the candidate they've spent months working to elect.

Dozens of Dianne Morales staffers were on strike Friday, saying Morales failed to recognize their demands for fair pay and benefits.

"The messiness of this campaign lies solely with the leader who failed to take meaningful action," Nia Evans, former policy director for the Morales campaign said Friday.

Approximately 40 staffers met at Bryant Park following a chaotic few days for a campaign that until now had outperformed those seeking to claim the progressive mantle. They drew signs, burnt incense and sage. Then they marched to the Morales campaign office to outline their demands.

"The Mayorales union is demanding that Dianne Morales and this campaign immediately reinstate our union leaders," Evans said.

Early voting starts in just two weeks, but the Morales campaign is focused inward, with staff members saying complaints about mistreatment followed by a push at unionizing was met by retaliatory firings and intimidation by Morales.

In a video to supporters, first reported by The Uprising, Morales appeared to admit some fault, but she also stressed  the firings of staffers were not related to unionization efforts.

"In many ways, we replicated the very systemic and structural issues that this campaign has intended to repair in our city. We are not perfect, but we are on a journey trying to reconcile all these challenges," Morales said.

Madia Semmar, a campaign worker who said she was hired to work on Get out The Vote efforts and digital strategy said she was underpaid.

From its inception, the Morales campaign has been held together by a network of volunteers. They have no experienced political operatives on staff, their workers are young, new to the rough and tumble world of city politics. Despite that, the campaign attracted surprising support. They qualified for public matching funds - more than $3.6 million so far.

There are approximately 100 people on staff, including some consultants. A review of campaign expenditure data show Morales has spent $534,000 so far in wages. That's a little more than $5,000 per worker.

"I came here to do one role, I almost immediately got promoted and did not get a pay raise for that role the white man that was working under me ended up making more money than me," Semmar said.

Morales’ rivals stand to benefit the most from her campaign’s implosion. With moderate candidates Eric Adams, Andrew Yang and Kathryn Garcia riding high in the polls, others including Maya Wiley are hoping to take advantage and rally progressive voters.

"You have to walk the talk. It's a lot of work, it's a lot of hours and what we have to do is care for each other and I'm really proud of my staff," Wiley said.

Wiley noted her campaign offers some of the benefits Morales workers are striking for, including paid sick leave, health benefits and paid time off.

Wiley, who has said she would rank Morales as her number two on the ranked choice ballot would not say Friday if she still plans on giving Morales her second place rank. Morales stayed out of view, there were no public events scheduled all day.