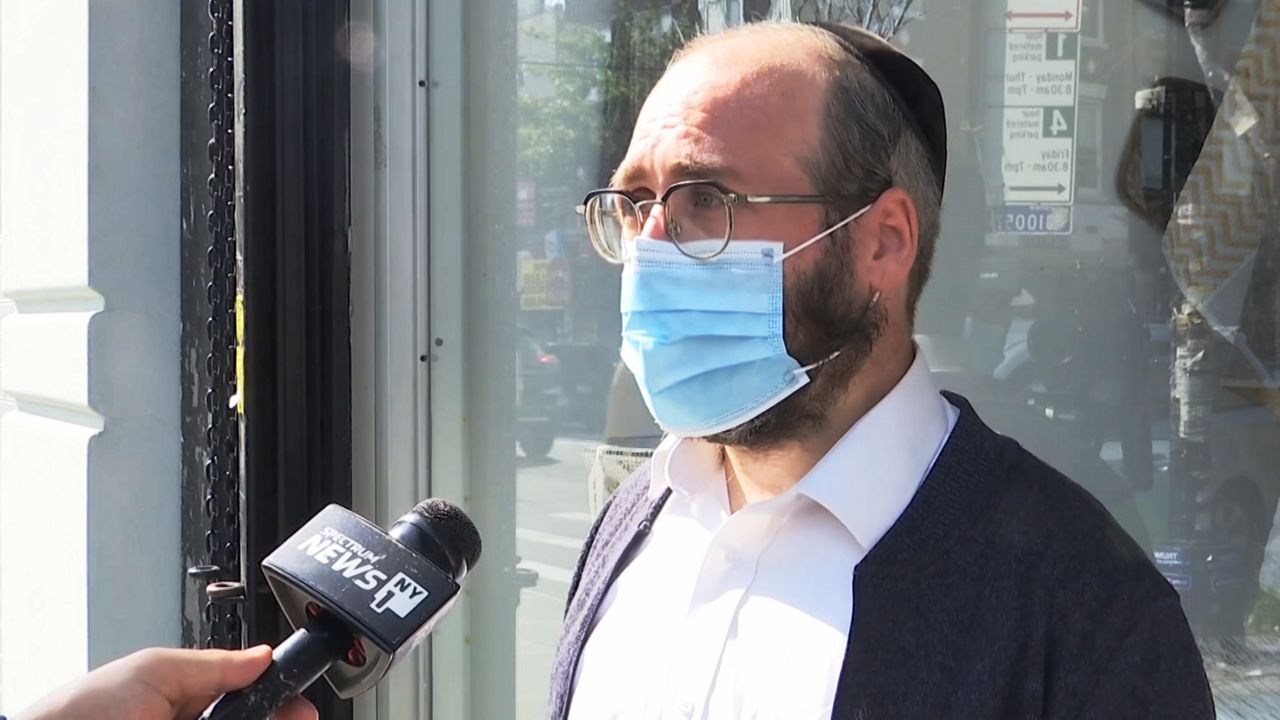 Jacob Kornbluh during an interview with NY1 earlier Wednesday, before the incident.

NYPD Investigating Report of Journalist Being Assaulted at Demonstration

BROOKLYN, N.Y. - Journalist Jacob Kornbluh, national politics reporter for the Jewish Insider, told NY1 he is physically OK, but still "distraught and disappointed" after being attacked Wednesday at a rally protesting the state's new coronavirus restrictions in Borough Park.

"To see them literally, literally want to kill me, that was like what the heck is happening here," Jacob Kornbluh told NY1 News Thursday from his roof. Kornbluh said he’s now scared to walk the streets of his Borough Park neighborhood.

I was just brutally assaulted, hit in the head, and kicked at by an angry crowd of hundreds of community members of the Boro Park protest — while yelling at me “Nazi” and “Hitler” —after Heshy Tischler recognized me and ordered the crowd to chase me down the street

Kornbluh said he was kicked at, pulled and punched in a crowd of hundreds. He told NY1 the assault was instigated by local activist Heshy Tischler, who ordered people to attack him.

Tischler believes the spike in coronavirus cases is a hoax, and is one of the organizers of the protests. Shortly after the attack, Kornbluh said on Twitter he was "saved by heroic police officers and several community leaders" who pulled him from the crowd.

“Heshy kind of had his phone up and in his face and he was calling him a moser, which means an informant and under certain interpretation of Jewish law you have license to kill a moser,” said Tablet Magazine Reporter Armin Rosen, who was standing next to Kornbluh at the time.

Kornbluh said he's pressing charges against Tischler and that he is seeking support from the Brooklyn district attorney and NYPD to investigate. But according to DCPI, no arrests or summonses have been made in connection with the assault or the protest overall, despite officers being on the scene.

"I saw the video, the attack on Jacob Kornbluh—absolutely unacceptable," the mayor said at his briefing Thursday. "Disgusting, really. Here’s a journalist, a journalist who really cares about doing the work of informing people what’s going on and here’s a mob of people attacking him. It’s just unacceptable. There need to be consequences for that."

De Blasio and the NYPD are facing criticism for not having a handle on the protests.

"I do expect a clearer response going forward," de Blasio said. "I think there were some issues yesterday honestly in terms of both the NYPD’s approach and the approach of the city’s legal team. Understanding the state guidance and getting it right once and for all—that has to be corrected. We need a much clearer approach and I expect that to be corrected today before anything that happens this evening."

Before things turned violent, Kornbluh said he was worried about being exposed to coronavirus and not about being physically harmed.

"The minute Mr. Tischler came towards me and pinned me to the wall, not wearing a mask, spitting at me, I felt like my space was compromised and all the hard work that I put in since March to be safe for myself and my community, I felt at that point is being burned to the ground," Kornbluh said. "I did not think about my safety first, I thought about being healthy and not contracting the virus."

Tischler has denied any wrongdoing.

The incident occurred during the second night of protests following the decision by Gov. Andrew Cuomo to close schools and nonessential businesses and to limit the number of people allowed inside houses of worship in coronavirus clusters in Brooklyn and Queens.

Kornbluh says he will continue to do his job as a reporter but will now think twice about going to hot spots where he could be at risk for coronavirus exposure.

“This is not our way and if we want to return to normality, if we want to deal number one with the health crises, but also level the divide in our society, we have to disassociate ourselves from such individuals,” said Kornbluh.

Kornbluh has been outspoken in the community about the dangers of the coronavirus.

“I’m trying to do my job in explaining them what the data shows, how serious this problem is, but also how to deal with it. And if I can save even one life, let the hate come at me,” he told NY1 prior to the incident Wednesday.

He told them he wanted Tischler prosecuted and shortly thereafter a detective showed up at his door to start the investigation.

Some protesters Tuesday said they were angered the decision was made in the middle of the Jewish holiday Sukkot, which Jews observe by gathering in temporary shelters known as Sukkahs, as well as in synagogues.

"Especially the last day. Sukkos Torah is a holiday for the children especially. It's a holiday, people dance with the Torah, it's an essential part of our upbringing and just to take it away we feel in an abstract decision, so we feel very strongly that the governor is very wrong in this,” one resident said.

Some demonstrators lit a fire in the middle of a street in the heavily Orthodox Jewish neighborhood.

One person in the crowd, identified as Berish Getz, told police three to four people kicked and punched him in the face, neck and back early Wednesday. He was rushed to Maimonides Hospital, where he was in pain but talking.

People in the neighborhood said he was attacked because he is believed to have told police about large gatherings in Borough Park of people not wearing masks or socially distancing.

"I'm telling you right now. This is not a protest. Get it out of your heads. This is a war," Tischler said prior to the incident Wednesdsay. "And Mr. de Blasio and Cuomo started it. So now I have my soldiers."

On Wednesday morning, Tischler went on Twitter and held up a picture of journalist Jacob Kornbluh saying, "You know where rats belong."

“Jacob Kornbluh is a rat," Tischler said at the time.

Tischler, who is running for City Council, was also seen heckling city officials during a press conference last month in which those officials asked Orthodox Jewish neighborhoods to help stop the spread of coronavirus. Tischler claimed the city was exaggerating the outbreak and scapegoating the Jewish community.